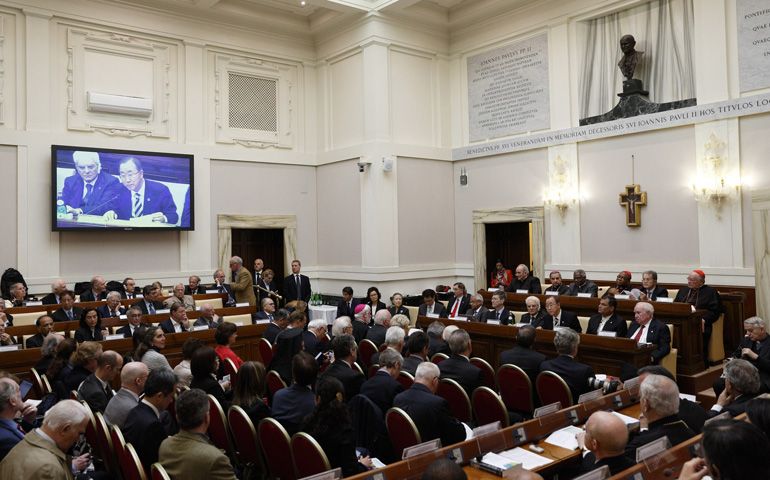 U.N. Secretary-General Ban Ki-moon addresses a Vatican summit on the moral dimensions of climate change and its impact on the poor on Tuesday. (CNS/Paul Haring)
This article appears in the Francis: The Environment Encyclical feature series. View the full series.

Vatican City — The head of the United Nations praised Pope Francis' efforts to address environmental issues like climate change and said he is counting on the pope to put moral backing behind global political initiatives to tackle the issue head-on.

Saying at a press conference that the U.N. has gotten support from political leaders and nongovernmental organizations worldwide to address climate change, Ban said: "The reason I am coming to the pope is that now I need moral support."

"I don't think religious leaders should be scientists," Ban continued. "But what is clear, what is important is ... to mobilize the will of the people and to lead the people" in addressing the issue.

Ban spoke Tuesday on the sidelines of a Vatican summit on climate change that is part of the lead-up to release of the new papal encyclical, expected in June or July.

At the end of the summit, a delegation of scientists, development practitioners, and religious, political and business leaders issued a declaration, stating: "Human-induced climate change is a scientific reality, and its decisive mitigation is a moral and religious imperative for humanity."

In their statement, they also said the world's religions "play a very vital role" in protecting creation, that "the poor and excluded face dire threats from climate disruptions." They urged world leaders to negotiate later this year arrangements that keep human-induced warming below 2 degrees Celsius.

"The world has within its technological grasp, financial means, and know-how the means to mitigate climate change while also ending extreme poverty, through the application of sustainable development solutions including the adoption of low-carbon energy systems supported by information and communications technologies," the declaration said.

Francis did not attend the event, which was hosted by the Pontifical Academy of Sciences.

In his opening comments at the conference, the U.N. leader said he was "very much" looking forward to the encyclical and that it will "convey to the world that protecting our environment is an urgent moral imperative and a sacred duty for all people of faith and people of conscience."

"It is critically important that people and their leaders hear your strong moral voice in the coming months," Ban told the faith leaders and scientists in attendance at the event.

The U.N. chief said Francis told him in their meeting that the upcoming encyclical was practically finished, but needed only to be translated into various languages before it could be published.

Cardinal Peter Turkson followed Ban's remarks Tuesday with a wide-ranging talk on the need for what he called a "fundamental change of course" regarding how humans treat the earth.

"Today, in our recklessness ,we are traversing some of the planet's most fundamental natural boundaries," said Turkson, president of the Pontifical Council for Justice and Peace. "The very technology that has brought great reward is now poised to cause great ruin."

Quoting from remarks of Orthodox Patriarch Bartholomew that "to commit a crime against the natural world is a sin," the cardinal said religious and moral leaders need to cultivate a "full conversion of hearts and minds, habits and lifestyles, structures and institutions."

Singling out corporations and financial institutions -- saying they "must learn to put long-term sustainability over short-term profit, and to recognize that the financial bottom line is secondary to ... the common good" -- Turkson also said all are called to address the issue.

"Every single person of good will is summoned by an inner call to embrace the personal virtues that ground sustainable development," the cardinal said.

"We need to shift away from an unthinking infatuation with GDP and a single-minded zeal for accumulation," Turkson said. "We need to learn to work together toward sustainable development, in a framework that links economic prosperity with both social inclusion and protection of the natural world."

The U.N. leader tied release of the encyclical to several other events on climate change in 2015, saying it is to be a "year for global action" on the issue.

Among other events in the year is a U.N. special summit in September, when global leaders are to develop a post-2015 global development agenda. One of the six proposed themes for the event is "tackling climate change and achieving more sustainable lifestyles."

Francis is to address the U.N. during his visit to the United States on Sept. 25, the first day of the summit. Ban said the pope's address will be the first such address by a pope to a working meeting of the U.N.

Global leaders are also to meet in November and December in Paris for the 2015 United Nations Climate Change Conference.

Francis' encyclical on the environment has already garnered criticism from some corners, especially from those who express doubt about the scientific consensus regarding global climate change.

Two such groups hosted a press conference near the Vatican Monday, criticizing Tuesday's event and warning Francis to stay away from the subject.

In his remarks Tuesday, Turkson also said that the wealthiest nations of the world should bear most of the burden in addressing the effects of climate change.

Giving an analogy of 10 people walking in the desert where two in the group had drank half of their supply of water, the cardinal said: "In such a desperate situation, the two who have drunk their fill have a moral duty to scout ahead to find an oasis. When they find it, they have a moral duty to guide the rest of the group there, making sure that no life is lost."

"As this suggests, the wealthiest countries, the ones who have benefited most from fossil fuels, are morally obligated to push forward and find solutions to climate-related change and so protect the environment and human life," Turkson said.

"Citizens of wealthier countries must stand shoulder to shoulder with the poor, both at home and overseas," he said. "They have a special obligation to help their brothers and sisters in developing countries to cope with climate change by mitigating its effects and by assisting with adaptation."

Ban also spoke Tuesday at the press conference about meetings he held this week in Italy with Prime Minister Matteo Renzi on the crisis of migrants dying in efforts to cross the Mediterranean Sea.

Last week, some 900 people died when a boat carrying migrants capsized. Many migrants are leaving from Libya, some after traveling many miles from conflict areas in the Middle East and Africa.

Ban spoke out against some calls for European military forces to sink the dangerous makeshift boats used by migrants and traffickers, saying that is "not the appropriate way" of action.

"In every case, in every conflict, military means may be effective ... but there is no alternative to a political solution," he said.

Editor's Note: This story was updated at 3:40 p.m., central time, with excerpts from the declaration made by participants of the Vatican climate summit.