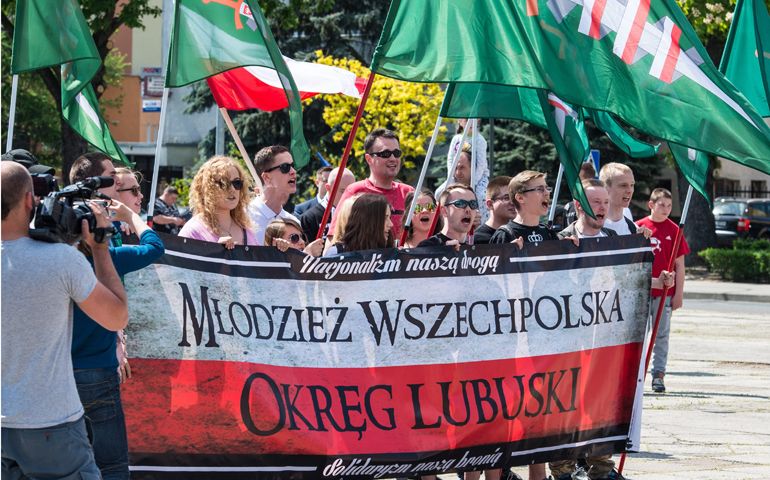 Members of the group All-Polish Youth demonstrate against refugees across the river from Frankfurt, Germany, in Slubice, Poland, May 7. (Newscom/EPS/Patrick Pleul)
This article appears in the Francis in Poland feature series. View the full series.

Poland's Roman Catholic church is taking a sharp right turn, with its strong ties to the government, which is dominated by the far-right Law and Justice Party. This association tarnishes the church's image, according to critics.

"The definite far-right tilt of the Roman Catholic hierarchy is not good for the future of the institution," said Stanislaw Obirek, a former Jesuit priest and professor of history at the University of Warsaw. "There's no silver lining in this alliance."

Servite Fr. John Pawlikowski, a professor of social ethics and director of the Catholic-Jewish studies program at Catholic Theological Union in Chicago, is equally critical of the Polish church's ties with the Law and Justice government.

"They are only cutting their own throats," he said of the church. "Many people will become disaffected, especially the younger, educated people."

Church support for the far-right government played a decisive role in the party's landslide victory in the October 2015 national elections.

Pope Francis will visit Poland July 27-31. The pope's visit, coinciding with the triennial World Youth Day celebrations, will inevitably call attention to the contrast between his liberal social policies and those of the Polish church. Follow NCR's coverage of the pope in Poland at NCRonline.org/feature-series/francis-in-poland.

On July 3, a letter from the Polish bishops inviting participation in World Youth Day was read in churches throughout Poland. Francis was not mentioned.

Many Polish Catholics do not share the pope's priorities regarding helping the poor, saving the planet from climate change, or providing refuge for the millions now fleeing war zones, say many observers.

"It is no secret that the message of Francis is ignored by the Polish clergy," writes Jaroslaw Makowski in the May 31 edition of Poland's Newsweek magazine.

"For both these popes, the most important thing was the adherence to Catholic doctrine," he observed in a phone interview. "For Pope Francis, his commitment to the poor and disadvantaged is most important, while doctrine remains in the background."

According to Adam Szostkiewicz, a senior opinion writer for Polityka, Poland's largest newsweekly, many Poles do not relate to Francis.

"They see him as someone alien, someone who comes from the radical theology of liberation," said Szostkiewicz. "That is such an ignorant view, but that is the perception of Pope Francis."

The alignment of the Polish church with Poland's government, however, is alienating those Poles who denounce what is widely viewed as the government's naked power grab. The Law and Justice government, for instance, has rendered the nation's high court, the Constitutional Tribunal, ineffective by limiting its powers, thereby creating a constitutional crisis that seriously undermines Polish democracy.

Poles opposed to this far-right alliance between the church and the government also protest a joint church and government campaign to introduce the most restrictive anti-abortion legislation in Europe. The proposed legislation would ban all abortion, without exception, making it punishable by imprisonment. It's expected that Parliament will debate the proposal this September.

The Polish church supports the Law and Justice Party because the party has pledged to defend the Catholic identity of this homogeneous nation. As a result of this close alliance, the separation of church and state that's enshrined in the Polish Constitution is being eroded.

In a speech in Radom in June, Bishop Piotr Libera of Plock expressed the church's fear of the advancing Western European secularism, branding it "a leftist policy of multiculturalism in which all religions, all cultures, are equally important, but not the one in which they grew up, Christian, of Christ."

Obirek expressed concern about the Polish church's embrace of the government's nationalism. "It amazes me," he said, "that nationalism, which is fundamentally alien to Christianity, finds approval among the bishops."

This Christian nationalism is fostering racist violence throughout Poland, including a public burning of an effigy of an Orthodox Jew in November 2015 and the desecration of mosques. In March, a group known as All-Polish Youth burned an effigy of German Chancellor Angela Merkel for her having accepted more than a million Muslim refugees.

Rafal Pankowski, co-founder of "Never Again," a Polish nongovernmental organization that fights hate groups, said in a phone interview that this blessing was tantamount to church legitimization of a hate group.

"I would have no hesitation to call the All-Polish Youth a hate group, and that is well known throughout Poland," he said. "I am very disappointed."

A spokesman for the Krakow archdiocese said the group's visit was merely a "courtesy call."

On April 16, another extremist group, National-Radical Camp, carried its banners into the cathedral in the city of Bialystok in northeastern Poland. During Mass with the group, Fr. Jacek Miedlar delivered an anti-Semitic homily, according to a report in Gazeta Wyborcza, Poland's largest-circulation newspaper. Upon leaving the cathedral, the group marched to the city center, singing, "Zionists instead of leaves will hang from the trees."

A spokesperson for the church apologized, saying, "Nationalism is a stranger to the Bialystok church."

These growing nationalistic and xenophobic attitudes are alienating many Polish Catholics, especially young Poles who don't support the Law and Justice Party, but want to remain Catholic, according to Szostkiewicz.

"They want to belong to a community," he said. "And the Catholic community is dominated by Law and Justice."

Szostkiewicz sees this situation as presenting a moral and ethical challenge for the church that the priests and bishops choose to ignore.

Francis' focus on joy in apostolic exhortation something to emulate