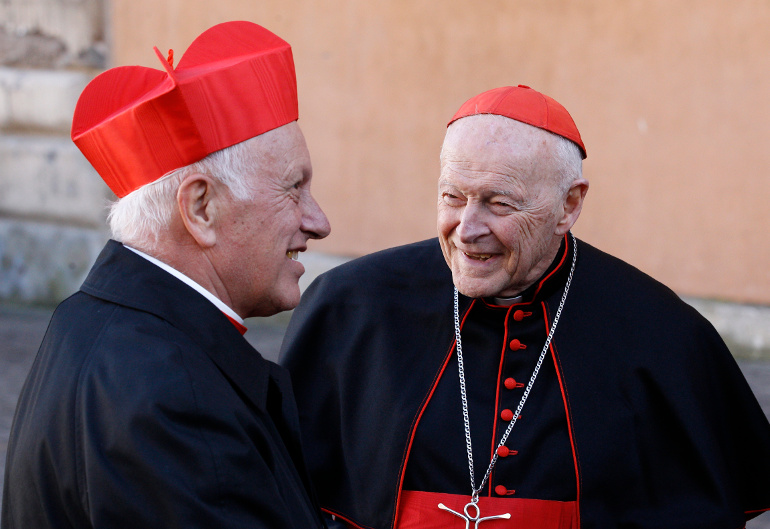 Pope Francis has captured the world's imagination in the year of his pontificate so far because he is a pastor who is "simple and straightforward," says retired Washington, D.C., Cardinal Theodore McCarrick.

"I think it's very simple," McCarrick said in an NCR interview. "The papers and the reporters are analyzing and reanalyzing him but I think they're having trouble with Francis because he's very simple and straightforward."

"What you see is what you get," said McCarrick. "And what you hear is what comes to his heart."

McCarrick, who served as archbishop of Washington from 2001-06 and is known for his work as a human rights advocate, spoke to NCR Feb. 23 following meetings and ceremonies at the Vatican among some 185 of the church's cardinals to add 19 new members to their ranks.

In a 30-minute interview at the Pontifical North American College, McCarrick spoke of the impact Francis is having on the global church and on the deliberations the cardinals undertook in closed-door meetings Feb. 20-21 on the church's family pastoral practices.

The cardinal also spoke of how he sees Francis' vision of a bishop's ministry trickling through dioceses around the world and what it was like to visit the future pontiff when he was Cardinal Jorge Maria Bergoglio in Buenos Aires, Argentina.

Commenting on the last subject, the cardinal said that when he arrived in Buenos Aires for a visit years ago the future pope met him at the airport and drove him around town, focusing on spots where people experiencing poverty lived.

The cardinal continued: "[Bergoglio] would say, 'Under the bridge there's a terrible favela of the poor and I try to go down whenever I can. Up on the hill there's a prison and I worry about the young people so much there, I try to see them as much as possible.'"

Before the formal ceremony Feb. 22 marking the Francis creation of 19 new cardinals from around the world, the cardinals met in closed sessions to discuss an upcoming October meeting of the world's bishops, known as a synod, which will focus on issues of family life.

McCarrick said those sessions, which opened with a two-hour talk by German Cardinal Walter Kasper, were somewhat different that previous cardinals' meetings because they were longer and allowed for more conversation.

"Pope Francis has added the new presence to it because in the past before the making of new cardinals we always would [meet] for maybe a day before and we would chat about things," said the cardinal. "But we had two full days with the Holy Father and he came to all things, spoke briefly and once in a while."

Although McCarrick would not say whether there was a highlight in the cardinals' discussions, he gave particular support to Kasper's presentation, saying the German was a "genius."

"I said to him the other day, 'I have to put your name in to be a doctor of the church,'" McCarrick said. "He's really brilliant. It was a very, very great presentation. It was very interesting."

McCarrick also referred to Francis' homily Feb. 23, when he was celebrating Mass with the cardinals in St. Peter's Basilica. Speaking directly to the cardinals, the pontiff told the prelates to "avoid, habits and ways of acting typical of a court: intrigue, gossip, cliques, favoritism and preferences."

"He's used the words in the past — and it's very powerful — we should not be functionaries, we should be pastors," said McCarrick. "I think what he said [Feb. 23] is basically that same message: You're not going to be functionaries."

"I think he said to the nuncios when they were here several months ago — they have a role in helping to select bishops — and he said, 'Don't give me princes, give me pastors,'" said McCarrick.

"I think that's where he's coming from," the cardinal continued. "And it's where he is. What he tells you is what he's got. He is absolutely honest and tremendously caring. And he hopes all of us will be."

McCarrick also said Francis is making sure that bishops have "no way of hiding" that their primary role is to serve their people.

"It's clear it is not a new thought," he said. "But he's making it a new emphasis in our lives, not that it's always been there. But he is so committed to making us realize that we are here to serve."

Asked what it will take for Francis' message of service to reach dioceses around the world, McCarrick said the longer the pope is "appointing men who have this orientation, who have this desire, the more it will spread through the church."

"I think if he keeps talking like he does now we all will realize it," the cardinal said.

McCarrick also spoke of the moment of the consistory, captured in photos that spread quickly around the world: When Pope Francis and Benedict embraced in St. Peter's Basilica, with the retired pontiff removing his white skullcap, known as a zuchetto, in a sign of respect to Francis.

"The wonderful moment was when Pope Francis was coming up the aisle and he immediately went over to Pope Benedict," said McCarrick. "And Benedict did what all the cardinals used to do in the old days, he took his zucchetto off before he greeted the pope."

"To see Benedict do it was just so lovely," he said. "Here's a man who for seven years was the pope himself and was one of the old ways of deep respect. In that there was a mark of the deep courtesy and the deep kindness of Pope Benedict."

But, said the cardinal, he doesn't expect Francis or any other pope to make a similar decision as Benedict to resign.

"I don't think there has been sea change," said McCarrick. "I think we now understand if a man is ill or if for one reason or another a man feels that the burdens become more than he can handle as the Lord would want him to, he should step down. That now is once again possible but I don't see every pope doing that. I don't necessarily see any other pope doing that."

But, he admitted: "What has happened once can happen twice."