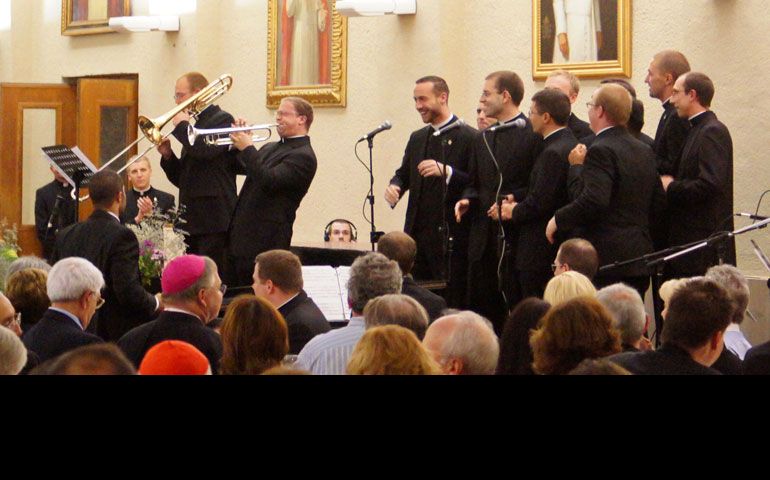 Rome — A U.S. cardinal has urged American Catholic seminarians to emulate Pope Francis' example in stressing pastoral care over academic knowledge, asking them to "have [their] hearts beat in unison with the pope's heart."

Speaking at a gala dinner and fundraiser for the Roman institution that trains seminarians from dioceses across the U.S., Cardinal James Harvey told the future priests: "People don't care what you know until they know that you care."

"People aren't really going to be interested in what you have to say, even if you have a lot to say until they're convinced that you care about them and your needs," said Harvey, who served as a key adviser to Pope John Paul II.

"Surely, the essential part of Catholic wisdom is looking to the bishop of Rome, the successor of Peter, for direction in how best to serve the people of God," Harvey continued.

Seminarians and priests, he said, should "see the needs of the church in the world through the eyes of the poor, hear their cries through the pope's ears and have our hearts beat in unison with the pope's heart."

Harvey spoke April 30 at the Rector's Dinner for the Pontifical North American College, the seminary on a hill overlooking St. Peter's Basilica. The college, owned by the U.S. Conference of Catholic Bishops, trains and forms many seminarians and priests from dioceses across the U.S., Canada and Australia.

The cardinal was honored at the event with the college's Rector's Award, annually given to exemplary supporters of the college. This year, Harvey shared the award with Scott and Lannette Turicchi of Pasadena, Calif., who serve on the college's Council for Institutional Advancement.

The black-tie dinner has been held annually since 1991. It attracts many U.S. cardinals, bishops, alumni, high-profile lay Americans, and other Vatican and Italian notables. Organizers said this year's event raised just over $1 million for the college.

Seminarians act as greeters and wait staff for the formal event, and provide live entertainment for the evening, with popular and classical music, singing and dancing.

About 250 seminarians and young priests live at the college. The first college opened in 1859 in an unused Dominican convent. The current facility on the Janiculum Hill opened in 1953. It is primarily a residence and house of formation. Seminarians enroll and pursue studies at Gregorian University, the University of St. Thomas Aquinas, or the University of the Holy Cross.

Harvey served as the prefect of the papal household from 1998-2005 under John Paul. Accepting the Rector's Award, Harvey quoted Pope Benedict XVI's remarks about the service of cardinals that they are "princes of a crucified king."

That lineage, he said, "helps us understand ... that a cardinal is usually not from noble lineage in the order of nature -- his bloodline, if you will, is traced back in the order of grace."

"As every member of a royal family will tell you, the honors bestowed pale in comparison to the responsibilities of the post, the duties incumbent on the office," he continued.

Harvey stressed that the seminarians must place their lives at the service of the church. But, he said, "not the church of some beautiful idea, but the church made up of real, flesh-and-blood human beings."

The current rector of the North American College is Msgr. James Checchio, a priest of the diocese of Camden, N.J. He was appointed to the post in 2005. The chairman of its board of governors is Newark, N.J., Archbishop John Myers.

Pope's quotes: Give thanks