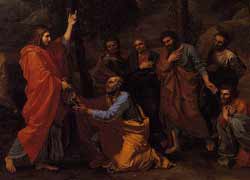 The new Ordinariate of the Chair of St. Peter will be based in Houston, according to Jan. 1 announcements released in Rome and Washington.

After 28 years of ministry in the Church of England and the U.S. Episcopal Church, in 2007 Steenson and his wife became Catholic. He was ordained a Catholic priest in 2009 and was instrumental in establishing the formation program for Anglican priests applying for Catholic priesthood as part of the ordinariate, which has been in the planning stages for the past two years.

Steenson is currently a professor of patristics, the study of the early Christian theologians known as the Fathers of the Church, at the University of St. Thomas and St. Mary's Seminary in Houston.

The ordinariate will be in charge of parishes of Anglican use across the country – where former Anglicans now in full communion with the Catholic Church will be allowed to retain some of their Anglican liturgical and other traditions, most notably incorporation of many elements of the Anglican Book of Common Prayer in the 2003 Book of Divine Worship.

That official Catholic liturgical book for use in formerly Anglican communities was first developed in 1983 and revised in 2003.

As an ordinary, Steenson becomes a voting member of the U.S. Conference of Catholic Bishops, although he cannot be ordained a bishop because he is married. He and his wife have three grown children and a grandchild.

The U.S. ordinariate is the second to be formed in the world in response to requests from many Anglican priests and laity seeking to join the Catholic Church in recent years. The first, formed Jan. 15, 2011, is the Ordinariate of Our Lady of Walsingham in England and Wales.

Recurring movements of Anglo-Catholicism have long been an undercurrent in the Anglican Church, most notably, in the more distant past, the Oxford Movement of the mid-19th century, which sought to restore lost practices of ancient Christianity to the Anglican Church under the concept that it was one of the three branches [Eastern Catholics, Roman Catholics and Anglican Catholics] of the Catholic Church.

For Roman Catholic history, the most notable figure in the Oxford Movement was an Anglican theologian and cleric, John Henry Newman, who gradually found the three-branch concept inadequate and became a Catholic – and eventually a cardinal and one of the greatest Catholic theologians of the 19th century.

More recent Anglican movements towards reunion with Rome have stemmed not only from more classical doctrinal and theological arguments, but from reactions to movements and official actions within the Anglican Communion that a number of Anglicans consider contrary to authentic Catholic Christian belief and practice, such as the ordination of women as priests and bishops, the ordination of openly practicing homosexuals and the blessing of homosexual unions as marriages.

In 1980 the Catholic Church responded to requests from U.S. Episcopal priests and laity for reunion with Rome when Pope John Paul II issued a pastoral provision allowing for married or unmarried Episcopal priests in the United States to become Catholic priests after proper new formation.

Such converts re-ordained as Catholic priests were allowed to hold most church offices and perform other priestly functions in the church including regular pastoral ministry in parishes, but for the most part they were not allowed to become pastors.

But some priests who came in with a sufficient following of members of their former Episcopal parish were allowed to form and be pastors of Catholic parishes of Anglican Use, utilizing many Anglican worship traditions from the Book of Common Prayer for Mass, Liturgy of the Hours and other services, adapted where necessary for appropriate Catholic practice.

More than a dozen Catholic communities of Anglican Use have been formed under that pastoral provision since 1980, including several that are full-fledged parishes. An unofficial Wikipedia list http://en.wikipedia.org/wiki/Anglican_Use lists 15 such U.S. communities.

In the ordinariate's news releases on its establishment, it also announced that Fr. Scott Hurd, a priest of the Archdiocese of Washington and a former Anglican priest, will serve a three-year term as vicar general of the new ordinariate.

Last November, when Cardinal Donald W. Wuerl of Washington announced at a press conference during the U.S. bishops' fall meeting in Baltimore that the U.S. Anglican ordinariate would be established Jan. 1, it was not entirely clear from his remarks whether the current Anglican Use parishes around the country – then under the jurisdiction of their local Latin Catholic dioceses – would be transferred to the jurisdiction of the ordinariate, either by petition or automatically. Wuerl at the time was head of an ad hoc committee charged with overseeing formation of the U.S. ordinariate.

Wuerl said Jan. 1, "As the former Episcopal bishop of the Rio Grande [covering New Mexico and western parts of Texas], Fr. Steenson brings to the position of ordinary great pastoral and administrative experience, along with his gifts as a theologian."

The 30-year U.S. experience with pastoral provisions for Anglican priests and communities seeking full communion with the Catholic Church paved the way on many practical levels for Pope Benedict's 2009 apostolic constitution, Anglicanorum Coetibus, ("Groups of Anglicans") which set out provisions for how communities of Anglicans – including members of parishes or of vowed religious communities – could enter into full communion with the Catholic Church and at the same time preserve important elements of their liturgical and devotional life developed since the 16th-century break of the Church of England with Rome.

Like parents, God loves his children even at their worst, pope says