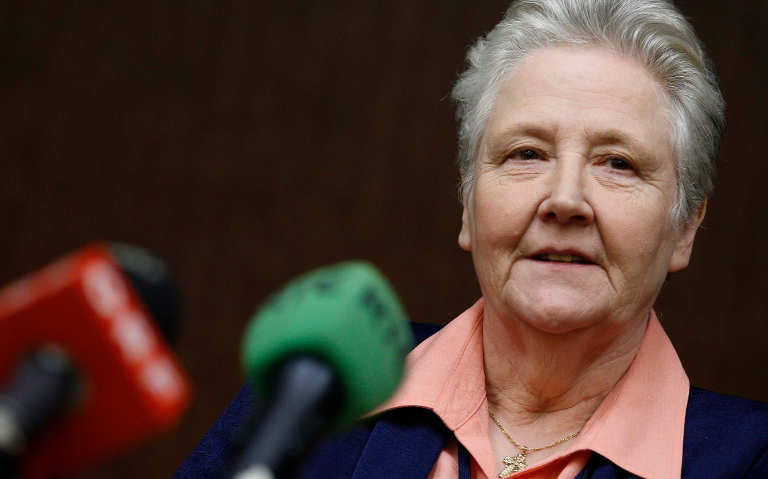 Marie Collins at a press conference in downtown Rome in 2012. (CNS file photo)

The Vatican commission advising Pope Francis on clergy sexual abuse will be making recommendations to the pontiff regarding consequences for Catholic bishops who do not follow church guidelines on preventing and reporting abuse, Boston's Cardinal Sean O'Malley has said.

While the cardinal said the commission has yet to recommend specifically what those repercussions might be, he added: "Obviously, there has to be consequences."

"There needs to be procedures that will allow these cases to be dealt with in an expeditious way, rather than just having things open-ended," O'Malley continued, responding to a question at a Vatican press conference Saturday from NCR about prelates like U.S. Bishop Robert Finn who remain in place despite mishandling sexual abuse cases.

The Vatican commission on clergy sexual abuse, which the pope created to advise him on the protection of minors in all circumstances, is meeting at the Vatican for the first time this weekend with all 17 of its members.

O'Malley, who leads the group, was speaking at a conference Saturday alongside two of its other members. The issue of accountability for bishops who do not appropriately respond to reports of clergy sexual abuse came up several times at the event.

Peter Saunders, an English survivor of clerical sexual abuse who is serving on the commission, said the issue "is most definitely something that is a concern and central to some of the work that's going to be carried out" by the group.

"If in a year or two there isn't some firm action on those matters, then I don't think I'll be sitting here talking to you," Saunders continued, saying he would be leaving the commission if it did not achieve some sort of accountability for bishops.

While Saunders, O'Malley and other commission members would not say exactly what they have in mind regarding their recommendations to the pontiff, member Marie Collins hinted that they might be suggesting to the pope that there be new mechanisms for firing of Catholic prelates.

Asked by NCR after the press conference about the fact that only the pope can remove bishops, Collins interrupted the question to say: "Currently, yes."

"All I can say is the commission is working on a means by which bishops can be made accountable," Collins, an Irish abuse survivor who serves on the commission, continued. "And if that goes forward ... there will be an answer to this problem."

Although the new papal advisory commission on sexual abuse was announced in December 2013, it remains unclear what role the commission will play in the Vatican's central bureaucracy or how the pope or Vatican prelates will treat its possible recommendations.

Membership of the group was only completed last December, when Francis added several more people to the commission, and this weekend's meeting is only the group's second in person.

Collins said she "spent the last year feeling quite frustrated about the slowness" of the motion on the group's work.

"I want to get to the point where we're not talking about it any more and where it's actually happening," she said. "That's probably where my frustration comes in."

O'Malley said Saturday that the commission has created several different working groups to develop recommendations for the pope on a number of issues. Those groups, he said, will also include people outside the commission who can provide input.

One key issue, O'Malley said, will be to work with bishops' conferences around the world in developing and maintaining their guidelines on preventing and reporting abuse.

While the Vatican's Congregation of the Doctrine of the Faith in 2011 called on bishops' conferences in to develop such guidelines, O'Malley said that about four percent, primarily those in mission areas, have yet to do so.

O'Malley also said he would be writing a letter to the heads of each of the bishops' conferences asking them to name a contact person to be in touch with him so they establish a "line of communication" on sexual abuse.

The cardinal also said the commission has also been tasked with presenting methods for "measuring compliance" of bishops' conferences on the issue.

Collins said her main priority in the commission's work was accountability of bishops.

"You can have as many guidelines as you like in place, but if the men that are supposed to be implementing don't implement them, there has to be some sanction or you're wasting your time," she said.

"We can write and [make] recommendations to the Holy Father and he can put it in a guideline to the bishops, but if there's nothing there if they ignore it, it's all a waste of time," she continued.

Collins also said that commission's new working groups total to about ten and identified a few of the groups' main purposes, including separate subgroups to:

Toward the end of the press conference Saturday, Saunders also said he thought the commission should study links between priestly celibacy and sexual abuse.

"I think these are issues that I'm hoping that we are going to discuss," he said. "I've been contacted by lots of people, experts, who make very powerful cases for connections between things, such as celibacy as an example."

Speaking of his own experience as a survivor, Saunders said that the "kindest thing" he could say about his abusers was "that they were desperately, desperately lonely people."

"From my knowledge of the Bible, Jesus never said if you want to follow me you've got to be celibate," said the Englishman.

O'Malley, citing studies done on behalf of the U.S. bishops' conference on that issue, added later: "I personally don’t believe that celibacy is necessarily what causes sexual abuse."