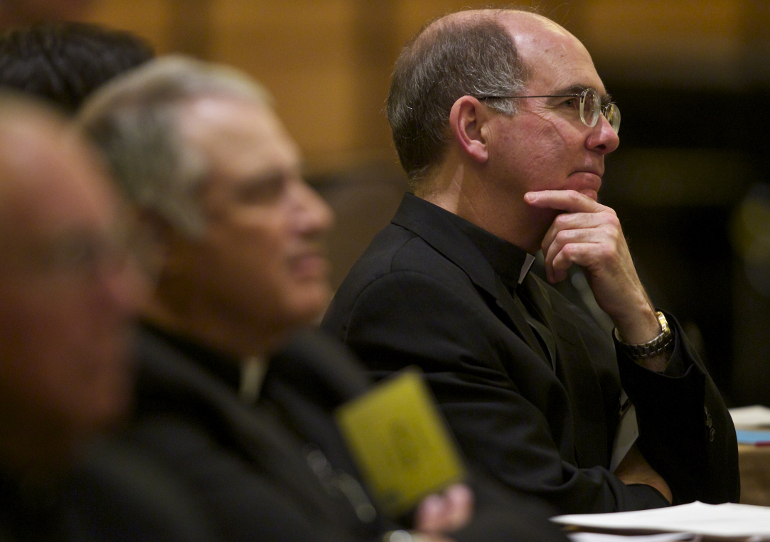 The U.S. archbishop who was given expansive oversight by the Vatican of American sisters will attend their annual gathering in mid-August and will speak of his role as their church-mandated overseer.

Unclear, however, is whether Seattle Archbishop J. Peter Sartain will take questions from the approximately 900 women, leaders of the various orders of sisters across the country, who are expected to attend the event.

News of Sartain's presence at the assembly of the Leadership Conference of Women Religious (LCWR) comes amid continuing uncertain times for the group, an umbrella organization of U.S. sisters that the Vatican ordered to revise in April 2012 and gave the archbishop wide authority over its statutes and programs.

One former LCWR president said its members are preparing for this year's assembly with an "ominous feeling."

"We're going into this assembly knowing that there's a cloud over our head and that we are being investigated and they are going to be monitoring us," said Mercy Sr. Theresa Kane, who served as LCWR president from 1979 to 1980.

Sartain, Kane said, is "showing up, and he's staying for the entire assembly. It's monitoring. There's a cloud ... and we're living through it."

Leaders of LCWR and the individual institutes of U.S. sisters have expressed pain and confusion over the Vatican's move, made in a "doctrinal assessment" published by the Congregation for the Doctrine of the Faith.

While some sister leaders initially expressed hope Pope Francis might take a softer line on the situation than Pope Benedict XVI, a statement from the doctrinal congregation in April said Francis "reaffirmed the findings of the Assessment and the program of reform."

LCWR, founded at the Vatican's request in 1956, represents about 80 percent of the approximately 57,000 U.S. Catholic sisters.

LCWR members confirmed in conversations with NCR that Sartain will attend the assembly, held this year from Aug. 13-16 in Orlando, Fla., although that information had not been made public.

NCR also obtained a copy of the gathering's official schedule and preparation materials, which also have yet to be made public.

"The apostolic delegate appointed by the Congregation for the Doctrine of the Faith to oversee its mandate to LCWR, Archbishop J. Peter Sartain, will be present for the entire assembly," says a notice on the third page of those materials.

"Archbishop Sartain will speak with the assembly on the mandate, and will have an opportunity to hear from and respond to the LCWR members," it continues.

Immaculate Heart of Mary Sr. Annmarie Sanders, LCWR's associate director for communications, said Friday the group invited Sartain to speak during one of the assembly's executive sessions and said he is expected to talk for about half an hour.

Sanders said LCWR leaders have not been told what Sartain might say to the group. The archbishop will "have an opportunity to hear from the members in response to whatever he shares with them" after his talk, Sanders said.

The Seattle archdiocese’s director of communications, Greg Magnoni, said Friday he was unaware that Sartain was going to attend the LCWR gathering. The archbishop, Magnoni said, is currently out of the archdiocese and unavailable for comment on the matter.

Magnoni also said Sartain preferred to speak on the matter directly to LCWR leaders and not through the media, a pledge the archbishop has repeated several times since his 2012 appointment.

One congregational leader told NCR that LCWR has been hosting meetings among its 15 regional chapters over the last several months to discuss the upcoming assembly and to let its members know Sartain will be present.

The prioress of the Dominican Sisters of Peace, Sr. Margaret Ormond, said that to prepare for the gathering, she has met with sisters in her order, asking: "What do we want Archbishop Sartain to hear?' "

In several pages of notes she gathered from that meeting, Ormond, whose order is based in Columbus, Ohio, said a key theme was how the sisters feel they have maintained fidelity to the church.

Ormond said that one statement several of the sisters agreed upon is, "We'd like Archbishop Sartain to know and understand we are women religious who deeply love the church and minister out of the Gospel values that emphasize the preferential option for the poor."

The Dominican Sisters of Peace has more than 600 sisters in five U.S. states and maintains missions in six other countries.

Mercy Sr. Pat McDermott, president of the Institute of the Sisters of Mercy of the Americas, the largest group of Catholic women religious in the Western Hemisphere with about 4,000 sisters, said she hoped the time with Sartain would be a "mutual time" where the archbishop "would receive from us our observations on how we have tried to be faithful to religious life."

"I think he would get a very consistent message from us, if that's part of the dialogue," McDermott said.

Discussions on the matter have since taken place outside public scrutiny. Several LCWR members said they were unsure of how many meetings their leadership has had with Sartain since August 2012.

While Sanders said there had been "several" meetings, she would not share details. Magnoni said Sartain has had conversations with LCWR leaders by phone and that was “the main way” they had been communicating with each other.

McDermott said her LCWR regional group was told at a recent meeting in Baltimore that the "tone" of discussions have been "very positive."

But McDermott said that the expansive power given to Sartain over LCWR remains a key point of contention, just as it was a year ago.

"The points of direction for the future, I think are unacceptable — that the bishops would be looking at our materials, our publications, giving direction to the assembly," she said. "That's not a conference that most leaders want to belong to."

McDermott said she is hoping for a "third way" for the sisters and the bishops.

"That way is not known yet, but I think it's a way that mutually can be satisfactory," she said. "And it could be helped if Pope Francis were willing to sit down with the LCWR leadership and listen to the concerns and inaccuracies that were made in the doctrinal assessment."

Kane said she wants Sartain to give more specifics about what faults the Vatican finds with her group. She said sisters still do not understand "how this ever began, and why, and what's the rationale."

The Vatican congregation in April 2012 said it had three major areas of concern with LCWR and alleged the group had "a prevalence of certain radical feminist themes incompatible with the Catholic faith."

"I haven't yet heard one example of one of these themes they're trying to identify for us," Kane said. "Apparently, this is what led to this investigation, but they've never been clear or definitive … in what they mean by that."

The LCWR assembly program materials state that the theme of this year's gathering is to be "Leadership Evolving: Graced, Grounded & Free."

"Religious life finds itself at a critical juncture," the program states. "The decisions facing religious institute leaders today are enormous, and the consequences of our choices can have significant impact on how we bring religious life into the future."

Unlike in previous years, sisters attending this year's gathering will hear from only one keynote speaker during the event, Franciscan Sr. Ilia Delio.

An author of more than a dozen books, Delio holds doctorates in pharmacology and theology and is known for her work on environmental issues and for academic research on the interplay of science and religion in modern society.

Her keynote and subsequent discussion, for which LCWR has set aside more than five hours on Aug. 14, is to focus on "Religious Life on the Edge of the Universe."

"With a particular emphasis on evolution, consciousness, and emergence, we will highlight aspects of the new cosmos story for the future of religious life," it continues.

That session is co-hosted with the Resource Center for Religious Institutes, a Silver Spring, Md.-based group that advises women religious on their canonical and financial rights. The group was named specifically in last year's Vatican mandate as an affiliation Sartain should review.

The final night of this year's LCWR assembly, Aug. 16, will see the group bestow its highest honor on Franciscan Sr. Pat Farrell, who led LCWR from 2011 to 2012 and guided its initial response to the Vatican mandate.

The announcement that Farrell will receive the "Outstanding Leadership Award" appears in an opposing column on the same page in the assembly program as the announcement of Sartain's presence.

LCWR says it is honoring the former president for the leadership she showed "through an exceptionally challenging time."