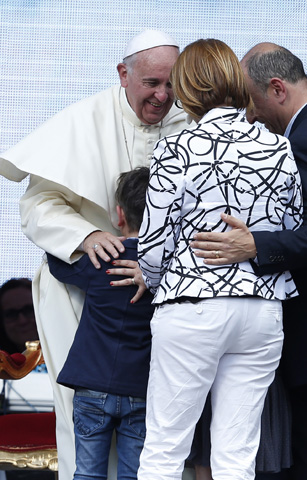 Pope Francis meets Lidia and Alessandro Di Napoli and their children during a gathering of more than 50,000 Catholic charismatics June 1 at the Olympic Stadium in Rome. (CNS/Paul Haring)

Struggles faced by faithful around the world in following Catholic teachings stem mainly from ineffective education in those teachings and the pervasive effect of a relativistic culture, states the guiding document for an upcoming Synod of Bishops on the family.

The document, anticipated by many Catholics as a barometer for what to expect from the synod, also strongly reinforces church teachings regarding the indissolubility of marriage, the restriction of marriage to heterosexual couples, and that partners must be open to having children.

At the same time, the document states, the church must respond with mercy to the struggles of families to adhere to sometimes controversial teachings -- like those prohibiting divorce and remarriage, contraception, cohabitation, and same-sex marriage -- and "support her children on the path of reconciliation."

Released by the Vatican on Thursday, the document was prepared for an extraordinary Synod of Bishops to be held in October. Called by Pope Francis last year, the 2014 synod is the first of two back-to-back yearly meetings of the world's Catholic bishops at the Vatican on the theme of "pastoral challenges of the family in the context of evangelization."

The Vatican's office for the Synod of Bishops drafted the preparatory document after a consultation unusual for the breadth of comment it encouraged prelates to seek from priests and laity.

Over the past months, news of the synod has raised hopes that Francis may be considering a change in the church's pastoral practices in a number of areas, particularly regarding the admittance of divorced and remarried persons to Communion.

Yet, Thursday's document paints the upcoming meeting as an event for the prelates to evaluate how to re-articulate current teachings, not to evaluate the teachings themselves.

Responses to the synod office's global consultation -- which saw bishops' conferences around the world answer a long questionnaire on how Catholics perceive church teachings -- were "in agreement on the underlying reasons for the difficulty in accepting Church teaching," the document states.

Among those reasons: "the hedonistic culture; relativism; materialism; individualism; the growing secularism; the prevalence of ideas that lead to an excessive, selfish liberalization of morals; ... [and] a culture which rejects making permanent choices."

The document, which spans 85 pages, is to be used by bishops around the world in preparing for the 2014 and 2015 synods. It was promulgated and signed by Cardinal Lorenzo Baldisseri, general secretary of the Vatican's office for the synod. The document is split into three parts:

At points, it addresses specific practices like abortion, contraception, same-sex marriage, and divorce and remarriage. At other points, it speaks much more broadly about the passing on of the faith and the wider context of the church's teachings on the family.

Prelates attending the Vatican synod are expected to review the document in preparation for whatever statements they might make during the meetings in October. Those statements, known as interventions, are usually limited to four or five minutes and are submitted for review before the opening of the event.

The 2014 synod, known as an extraordinary synod, will be limited mainly to leaders of national bishops' conferences. The 2015 meeting will be much larger, consisting of several elected bishop-representatives from each country.

One of the first issues that the document mentions as a "critical situation" within Catholic family life is abortion. The document says many bishops' conferences around the world said they were "greatly concerned" about the issue.

"In many ways, today's society seems to promote a culture of death regarding the unborn and to manifest a culture of indifference in approaching life in general," it states. "Many responses also stress that a contraceptive mentality has a negative impact on family relationships."

But the synod document also addresses what it calls a "counter-witness" to family values from inside the church, specifically because of the continuing clergy sexual abuse crisis and of some clergy who live a "lavish lifestyle."

"Responses from almost every part of the world frequently refer to the sexual scandals within the Church (pedophilia, in particular) and, in general, to a negative experience with the clergy and other persons," it states. "Sex scandals significantly weaken the Church's moral credibility, above all in North America and northern Europe."

Part of that counter-witness, the document adds, also occurs when members of the clergy treat Catholics who are separated or divorced improperly.

"The responses lament that persons who are separated, divorced or single parents sometimes feel unwelcome in some parish communities, that some clergy are uncompromising and insensitive in their behavior; and, generally speaking, that the Church, in many ways, is perceived as exclusive," it states.

"In this sense, an open and positive pastoral approach is needed, one which can restore confidence in the institution through a credible witness by all her members," it continues.

The document also specifically addresses cohabitation, saying it has become a "permanent form of life" for couples in Europe and North America.

"Cohabitation and de facto unions are a symptom of the fact that young people tend to prolong their adolescence and consider marriage too challenging and, therefore, fear embarking on an adventure considered too great for them," it states.

"In this regard, any possible response to this situation through pastoral care must assist young people overcome an overly romantic idea that love is only an intense feeling towards each other and teach them that it is, instead, a personal response to another person as part of a joint project of life, which reveals a great mystery and great promise," the document says.

The document treats at greatest length separation, divorce and remarriage, devoting eight pages to the subject. It states several times how reports from bishops' conferences globally mentioned the pain and suffering of divorced and remarried Catholics wishing to receive Communion.

"Some Church members who are cognizant that they are in an irregular situation clearly suffer from the fact that they are unable to receive the sacraments," the document states. "Many feel frustrated and marginalized. Some wonder why other sins can be forgiven and not theirs."

"In other cases, persons do not understand how their irregular situation can be a reason for their not being able to receive the sacraments," the document continues. "Instead, they believe that the Church is at fault in not permitting their irregular marriage situation. This way of thinking can lead to viewing withholding the sacraments as a punishment."

While the document does not outline coming changes to the church's practices on the matter, it does obliquely refer to such changes, saying, "The Church needs to equip herself with pastoral means which provide the possibility of her more widely exercising mercy, clemency and indulgence towards new unions."

The document also states that some responses recommended adopting the approach taken by Eastern Orthodox churches, which allow divorced members to remarry in a special ceremony that emphasizes penitence at the loss of the first marriage.

"In light of this suggestion, countries having a major number of Orthodox Christians noted that, from their experience, this practice does not reduce the number of divorces," the synod document states. "Others request clarification as to whether this solution is based on doctrine or is merely a matter of discipline."

The document also addresses the annulment process, saying some responses urged making it easier for Catholics to receive annulments while others defended the current practice.

Among reasons given for defending the current process: "In streamlining, simplifying or reducing the process: injustices and errors could result," or "the impression might be given that the indissolubility of the Sacrament is not respected."

Others, the document states, asked that there be a simpler and faster annulment process that grants more authority to local bishops, involves more laypeople in the tribunals that determine which annulments are granted, and reduces costs for the separated persons.

"Clearly, in these cases, the Church must not assume an attitude of a judge who condemns, but that of a mother who always receives her children and nurses their wounds so they may heal," the document states.

"With great mercy, the Church is called to find forms of 'accompaniment' which can support her children on the path of reconciliation," it continues. "With patience and understanding, she must explain to these people that their not being able to celebrate the sacraments does not mean that they are excluded from the Christian life and a relationship with God."

The document bluntly restates Catholic opposition to both same-sex marriage and artificial contraception.

On the first issue, the document states: "Every bishops' conference voiced opposition to 'redefining' marriage." Some responses, it says, "recommend not using phrases such as 'gay,' 'lesbian' or 'homosexual' to define a person's identity."

It states: "The great challenge will be to develop a ministry which can maintain the proper balance between accepting persons in a spirit of compassion and gradually guiding them to authentic human and Christian maturity."

"The Encyclical Humanae Vitae certainly had a prophetic character in reiterating the unbreakable link between conjugal love and the transmission of life," states the document. It says the positive aspects of Paul's teaching are unknown by many.

"Some responses see a relation between the commonly-held contraception mentality and a pervasive gender ideology which tends to change some basic aspects of anthropology, including the meaning of the body and the difference between the sexes which is replaced with the idea of gender orientation to the point of subverting sexual identity," it states.

"In this regard, many responses see a need to go beyond simply condemning this ever-pervasive ideology and to respond with persuasive argumentation against this position, now widely spreading in many western societies."

To assist in spreading the church's arguments against contraception, the document suggests parishes have presentations in favor of so-called natural family planning methods, "in collaboration with well-qualified people from both the field of medicine and the parish."

The document also suggests "including the subject in the seminary formation of future priests, given that priests are sometimes unprepared to deal with these issues and sometimes provide inexact and misleading information."

Following is the full text of the Instrumentum Laboris released Thursday. It also available on the Vatican website.

A version of this story appeared in the July 4-17, 2014 print issue under the headline: Synod document balances mercy, cultural blame.