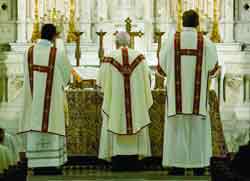 Bishop Edward J. Slattery of Tulsa, Okla., faces the crucifix on the altar as he celebrates Mass in early June at Holy Family Cathedral.

VATICAN CITY -- A Vatican spokesman downplayed a report that major liturgical reforms are being considered by Pope Benedict XVI.

"At the moment, there are no institutional proposals for a modification of the liturgical books currently in use," the spokesman, Father Ciro Benedettini, said Aug. 24.

He was responding to a report that a document with proposed liturgical modifications, including a curb on the practice of receiving Communion in the hand, had been sent to the pope last April by the Congregation for Divine Worship and the Sacraments.

The article, published by the newspaper Il Giornale, said the document was a first concrete step toward the "reform of the reform" in liturgy planned by Pope Benedict. It said the congregation proposed to promote a greater sense of the sacred in liturgy, recover the use of the Latin language in celebrations, and reformulate introductive parts of the Roman Missal to end abuses and experimentation.

The article said the worship congregation had voted on and approved the recommendations almost unanimously during its plenary session last March.

Vatican sources told Catholic News Service that the worship congregation did not, in fact, suggest a program of liturgical change, but simply forwarded to the pope some considerations from its discussions focusing on eucharistic adoration, the theme of the plenary session.

Some individual members may have added opinions on other liturgical issues, but they in no way constituted formal proposals, one source said.

The article in Il Giornale said one idea being studied by the worship congregation was a return to celebrating Mass with the priest facing the same direction as the people, known as "ad orientem."
tThe Vatican sources told CNS that this issue, however, was not discussed by the congregation at its plenary.

The debate over Communion in the hand drew attention in 2008, when Sri Lankan Archbishop Malcolm Ranjith, then secretary of the Vatican's worship congregation, said he thought it was time for the Catholic Church to reconsider the current policy.

The archbishop said the Second Vatican Council never authorized the practice of Catholics receiving Communion in the hand, a custom that he said was "introduced abusively and hurriedly in some spheres" and only later authorized by the Vatican.

Archbishop Ranjith recently left his Vatican post when he was named archbishop of Colombo, Sri Lanka. He was replaced by Archbishop J. Augustine DiNoia, a U.S. Dominican.

Last year, the Vatican announced that receiving the Eucharist on the tongue while kneeling before the pope would become the norm at papal liturgies. At that time, the Vatican's chief liturgist, Msgr. Guido Marini, noted that the distribution of Communion in the hand remains an exception granted by the Vatican to the bishops' conferences that have requested it.