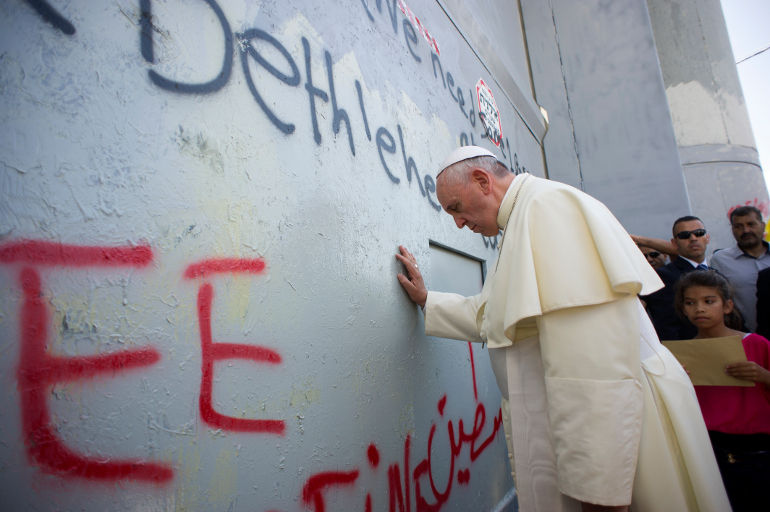 Pope Francis prays for peace in front of the Israeli security wall in Bethlehem, West Bank, May 25. (CNS/L'Osservatore Romano)

Controversy over family issues and the ongoing search for peace in the Middle East dominated Vatican news in 2014. Here are the highlights at a glance:

Jan. 16: Archbishop Silvano Tomasi, the Vatican observer to U.N. agencies in Geneva, testifies before the U.N. Committee on the Rights of the Child about the church's record on clerical sex abuse.

Feb. 20: German Cardinal Walter Kasper addresses a gathering of the world's cardinals, proposing that some divorced and civilly remarried Catholics could be admitted to Communion even without annulments of their first, sacramental marriages.

Feb. 22: Pope Francis creates 19 new cardinals, including 16 under the age of 80 and therefore eligible to vote in a conclave.

Feb. 24: The Vatican announces that Pope Francis has established a Council for the Economy, with both clerical and lay members, to oversee Vatican finances, and a Secretariat for the Economy, to be headed by Australian Cardinal George Pell, which will implement the council's policies.

March 21: Surrounded by survivors of innocent people killed by the Mafia, Pope Francis warns Italian gangsters that "there is still time not to end up in hell, which awaits you if you continue on this road."

March 27: Pope Francis and U.S. President Barack Obama meet at the Vatican; their discussion touches on several areas of tension between the Catholic church and the White House, including religious freedom and medical ethics.

March 28: During a penitential service in St. Peter's Basilica, Pope Francis unexpectedly goes to confession before hearing the confessions of some of the faithful.

May 25: During a visit to the Holy Land, Pope Francis makes an unscheduled stop to pray for peace before a controversial separation wall built by Israel over Palestinian protests on West Bank land. Later the same day, in Jerusalem, the pope meets with Ecumenical Patriarch Bartholomew of Constantinople, considered first among equals by Orthodox bishops, half a century after a historic encounter there between their predecessors.

June 8: At an interreligious ceremony in the Vatican Gardens, Pope Francis prays for peace in the Holy Land alongside Israeli President Shimon Peres and Palestinian President Mahmoud Abbas.

June 21: Celebrating Mass in a crime-ridden region of southern Italy, Pope Francis says members of the Mafia have excommunicated themselves from the church.

June 27: The Vatican announces it laicized a former papal ambassador, Jozef Wesolowski, and announces a Vatican criminal investigation against him on charges that he sexually abused minors in the Dominican Republic.

July 7: Pope Francis meets for the first time with survivors of clerical sexual abuse, spending more than three hours in private with them.

July 9: The Vatican announces formation of a committee to look for ways to increase collaboration and cut costs within the Vatican's communications apparatus.

Aug. 18: Pope Francis tells reporters on his return flight from South Korea that the use of force by a multinational coalition could be justified to stop "unjust aggressors" such as Islamic State militants in northeastern Iraq. He also says he would be willing to travel to the war zone if necessary to stop the violence.

Sept. 14: Pope Francis presides over the wedding of 20 couples, including some who have already had children or have lived together before marriage.

Sept. 20: The Vatican announces the formation of a special commission to streamline the process of granting marriage annulments.

Sept. 21: At a prayer service in Tirana, Albania, Pope Francis weeps at the testimony of victims of the country's former communist regime.

Oct. 6: Opening the first working session of the extraordinary Synod of Bishops on the family, Pope Francis urges participants to speak fearlessly and listen humbly during their discussions on the "pastoral challenges of the family."

Oct. 13: The synod's midterm report stirs controversy with remarkably conciliatory language toward people with ways of life contrary to Catholic teaching, including the divorced and civilly remarried, and those in same-sex unions and other nonmarital relationships.

Oct. 18: The family synod approves a final report emphasizing traditional Catholic teaching, but fails to reach consensus on especially controversial questions of Communion for the divorced and civilly remarried and the pastoral care of homosexual Catholics.

Oct. 23: Pope Francis calls for an end to life imprisonment, which he calls a "hidden death penalty."

Nov. 8: Pope Francis removes U.S. Cardinal Raymond Burke, 66, as head of the Vatican's highest court and names him to a largely ceremonial post for a chivalric religious order.

Nov. 17: Pope Francis tells an interreligious conference on traditional marriage that he will attend the World Meeting of Families in Philadelphia in September. In the same speech, he says preserving the family as an institution based on marriage between a man and a woman is not a political cause but a matter of "human ecology."

Nov. 25: Addressing European institutions in Strasbourg, France, Pope Francis says Europe has become a "grandmother, no longer fertile and vibrant" but "elderly and haggard," and he urges the continent to rediscover its religious roots.

Nov. 29: During a visit to Turkey, which includes meetings with Patriarch Bartholomew, Pope Francis prays alongside a senior Muslim cleric inside Istanbul's most famous mosque.

Dec. 11: The Vatican announces that Pope Francis will create an unspecified number of new cardinals Feb. 14.