Vatican norms insist on 'generous' approval for use of Tridentine rite 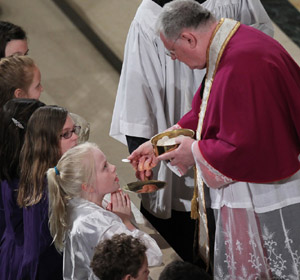 Children receive Communion during a 2010 pontifical solemn high Mass at the Basilica of the National Shrine of the Immaculate Conception in Washington. (CNS/Nancy Wiechec)

VATICAN CITY
A new Vatican instruction calls on local bishops and pastors to respond generously to Catholics who seek celebration of the Mass according to the 1962 Roman Missal, commonly known as the Tridentine rite.

The instruction, issued May 13, said pastors should approve such Masses for groups of faithful, even when such groups are small or are formed of people from different parishes or dioceses. These faithful cannot, however, contest the validity of the modern Mass or the authority of the pope.

"In deciding individual cases, the pastor or the rector, or the priest responsible for a church, is to be guided by his own prudence, motivated by pastoral zeal and a spirit of generous welcome," it said.

The instruction said that, depending on pastoral needs, bishops should make sure seminarians are trained in celebrating the Tridentine rite, or "extraordinary form" of the Mass.

At the same time, the Vatican said the Pontifical Commission Ecclesia Dei would be responsible for ensuring local church officials were making the old rite available where warranted.

The instruction was issued by the Ecclesia Dei commission and approved by Pope Benedict XVI. It came nearly four years after the pope, in an apostolic letter titled "Summorum Pontificum," relaxed restrictions on use of the Tridentine rite and said it should be made available in every parish where groups of the faithful desire it.

The new instruction said the pope's letter of 2007 had three main aims: to offer the old rite to all the faithful as a "precious treasure" to be preserved, to guarantee the use of the old rite "for all who ask for it" and to promote reconciliation in the church.

It said local bishops have the responsibility to make sure liturgical matters in their dioceses are proceeding in agreement with the pope's expressed desires and in "peace and serenity." That includes taking measures to ensure respect for the extraordinary form of the Roman rite, it said.

The instruction, in a section listing "specific norms," addressed several issues that have arisen as groups of faithful have petitioned for the scheduling of Masses in the old rite:

-- The papal letter had stated that a "group of the faithful" existing "in a stable manner" could legitimately request celebration of the Tridentine rite. The norms said such a group could be "quite small," could have formed after the publication of "Summorum Pontificum" and could be made up of Catholics from different parishes or dioceses who want to gather in a specific parish church or chapel.

-- In the case of a priest who presents himself occasionally in a parish church with some of the faithful and wishes to celebrate in the extraordinary form, the local pastor should permit it.

-- The norms said the Tridentine rite should be made available at sanctuaries and pilgrimage sites to groups of pilgrims who request it, if there is a qualified priest.

-- The faithful who ask for celebration of the Tridentine rite must not belong to or support groups that contest the pope or the validity of the Mass and sacraments as celebrated in the ordinary form, the norms said.

Jesuit Father Federico Lombardi, Vatican spokesman, said the language of that provision made it clear that "there should be no polemical or critical intent on the part of those people making the request."

The instruction also addressed the question of who can celebrate the Tridentine rite. The papal letter had said that priests who use the 1962 Roman Missal must be "qualified" to do so, but did not spell out requirements.

The new document said that every Catholic priest in good standing is generally qualified to celebrate Mass in the extraordinary form. A basic knowledge of Latin is needed, enough to pronounce the words correctly and understand their meaning, it said.

Regarding the need to know the rite, it said priests are presumed to be qualified if they present themselves spontaneously to celebrate the Tridentine rite and have celebrated it previously.

Father Lombardi said learning, or relearning, the rubrics of the old rite could be "demanding."

"For example, I wouldn't have a problem with the Latin. But knowing all the rubrics that indicate the movements and particular gestures is much more complex," he said.

The instruction said the Ecclesia Dei commission would be in charge of monitoring compliance with the provisions allowing the use of the old rite, and would have the power to decide on recourse by groups of faithful against "any possible singular administrative provision of an ordinary which appears to be contrary" to the papal letter. The commission's decisions can, in turn, be appealed to the Vatican's highest tribunal, the Apostolic Signature.

The Ecclesia Dei commission is headed by U.S. Cardinal William J. Levada, the prefect of the Congregation for the Doctrine of the Faith, who signed the instruction.

On other matters, the instruction:

-- New saints and some new prayers for special occasions can and should be inserted into the 1962 Missal. It said provisions on this question would be issued later.

-- All priests have permission to celebrate the Tridentine rite alone, without a group of faithful.

-- Masses for the ordination of priests should always use the ordinary rite, except when it involves the small number of religious institutes with a special dedication to the extraordinary rite.

The instruction said use of the Tridentine rite would also require exceptions from liturgical norms currently in use that are "incompatible with the rubrics of the liturgical books in effect in 1962." It did not spell out those exceptions.

Asked if altar girls are allowed to serve at a celebration of the Tridentine rite, Father Lombardi said the question was not specifically addressed in the new instruction.

Francis gets down to business on reform