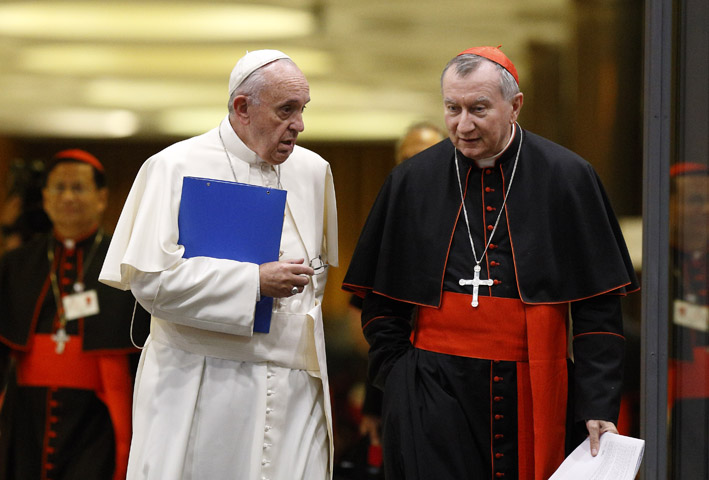 Pope Francis and Cardinal Pietro Parolin, Vatican secretary of state, talk as they leave the opening session of the Synod of Bishops on the family at the Vatican Oct. 5. (CNS photo/Paul Haring)

Pope Francis made short, unplanned remarks Tuesday morning to the Catholic bishops gathered for his global meeting on family issues to emphasize to them that care for the divorced and remarried is not the only issue to be discussed, a Vatican spokesman said.

The pontiff also reassured the some 270 prelates, gathered for the second day of the Oct. 4-25 Synod of Bishops, that the church’s doctrine on marriage “was not being put into question,” said the spokesman.

Jesuit Fr. Federico Lombardi, director of the Vatican press office, detailed the pope’s comments during a press briefing Tuesday, Oct. 6, on the state of the discussions at the synod, which is taking place behind closed doors.

Despite the pope’s reported exhortation that the participants focus on a number of issues, Celli said discussion of the church’s pastoral practices to Catholics who divorce and remarry remains “open.”

Asked during the briefing about Hungarian Cardinal Peter Erdo’s remarks opening the Synod on Monday -- which seemed to suggest there would no change on the church’s prohibition on receiving the Eucharist for Catholics who have remarried without obtaining annulments -- the Italian said: “The discourse is open.”

Celli, who is the president of the Pontifical Council for Communications, said the synod has just begun and at this point the discussions are “totally open.”

Durocher, who leads the Canadian archdiocese of Gatineau and is a former head of the country’s bishops’ conference, was asked if church practice towards the divorced and remarried represented a doctrine or a discipline -- and thus, whether it fit under Francis’ reassurance that doctrine was not being questioned.

"To be quite honest, there might be differences of opinion on that,” the Canadian replied. He said he thought that issue itself might be debated among the synod’s small discussion groups.

"The pope reminded us that it's one issue among many others that are confronting this session,” Durocher said of the pope’s remarks Tuesday. “We don't want to get bogged down by that issue, but at the same time it's one we will discuss seriously."

Lombardi and the other spokespeople on Tuesday gave a general overview of the discussions at the synod so far, which opened Monday with Erdo’s remarks and a short planned address by Francis.

The Jesuit said 72 Synod participants had made interventions during discussions in the gathering’s open sessions of Monday afternoon and Tuesday morning. The Synod will be breaking into small group sessions on Tuesday afternoon, divided by language groups.

Francis decided to speak Tuesday morning, Lombardi said, mainly to address questions some of the synod participants had about the process for the meeting, which has been changed from previous synods in an attempt to allow more time for discussions.

The pontiff also stressed that the 2015 synod “is in continuity” with the synod held on the same theme last year, the spokesman said. The pope said there are three official documents from that synod: His own opening and closing remarks for the event, and the final report released on Oct. 18, 2014, summarizing its work.

Basilian Fr. Thomas Rosica, a Canadian who assists the Vatican press office with English-language media, gave an overview of different themes talked about by synod participants Monday and Tuesday. He also presented what appeared to be quotations from interventions given by participants but did not identify them by name.

Rosica said some common themes mentioned were: Poverty, unemployment, migration, war, and the continuing refugee crisis. He said one participant also identified a need for a better pastoral approach for couples living together before marriage.

One of the synod participants, Rosica said, expressed that “there must be an end to exclusionary language and a strong emphasis of embracing reality as it is.” Another said that "our church can often be a dangerous place” and asked: “How do we make our homes and ecclesial communities welcoming places?”

One synod member, Rosica said, spoke of treatment of gay persons in the church, saying: "These are our children. They are family members. They are not outsiders. They are our flesh and blood."

Another member, he said, spoke about violence against women but also said that "the emancipation of women cannot exclude their obligation toward the family."

The archbishop said however that there is sometimes a difference of opinion between the bishops on how to address that divide. He said some prefer to emphasize church teaching, while others want to try to enter into dialogue with the prevailing culture.

"All the bishops ... agree that the teaching of the church coming from Jesus is a gift for the world, not just for a select few,” said Durocher. The question, he said, is: "How do you hold onto to the teaching ... and at the same time enter into dialogue with that world?"

The archbishop called Erdo’s address Monday “one piece” of the Synod "as we try to listen to the voice of the Spirit guiding us forward."

Other subjects Rosica said had been raised among the synod participants:

Rosica said both ideas were simply raised during the course of the discussions and were not agreed upon or elaborated. Normally, reconciliation in the Catholic church occurs in private with a confessor. There is a rite for communal confession ceremonies, but they are generally not allowed.

Jesuit Fr. Antonio Spadaro, who is participating in the synod at Francis’ appointment, tweeted Tuesday that the pontiff had asked the assembly members that morning to undergo a “profound discernment … to search to understand how the Lord wants his Church.”

The pope, Spadaro said, also asked the participants not to give into a "hermeneutic of conspiracy” that is “sociologically weak and spiritually unhelpful.”

Among those included in a Vatican list of the 72 Synod participants who spoke to the assembly Monday and Tuesday:

The synod continues Tuesday with small group discussions through Thursday. The prelates will meet together again in open session on Friday.