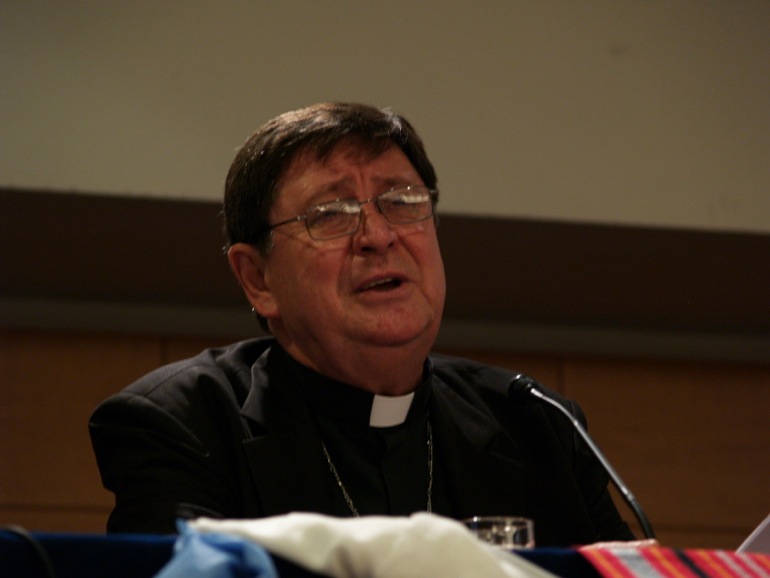 The Vatican decision last year to place the main representative group of U.S. Catholic sisters under the control of bishops was made without consultation or knowledge of the Vatican office that normally deals with matters of religious life, the office's leader said Sunday.

That lack of discussion over whether to criticize the Leadership Conference of Women Religious (LCWR), said Cardinal João Braz de Aviz, caused him "much pain."

"We have to change this way of doing things," said Braz de Aviz, head of the Vatican's Congregation for Religious.

"We have to improve these relationships," he continued, referring to the April 2012 order regarding LCWR from the Vatican's Congregation for the Doctrine of the Faith -- approved by Pope Benedict XVI -- that ordered the U.S. sisters' group to revise.

"Cardinals can't be mistrustful of each other," Braz de Aviz said. "This is not the way the church should function."

Braz de Aviz, who has led the Vatican's Congregation for Institutes of Consecrated Life and Societies of Apostolic Life since 2011, made the comments Sunday during an open dialogue session with some 800 leaders of sisters' communities at the triennial assembly of the International Union of Superiors General.

Answering questions from the sister leaders for over an hour and a half, Braz de Aviz spoke openly, referring several times to tensions between sisters and bishops on church authority, questions of obedience, and the future of religious life.

At one point the cardinal even called for wide-ranging review of structures of church power.

"We are in a moment of needing to review and revision some things," Braz de Aviz said. "Obedience and authority must be renewed, re-visioned."

"Authority that commands, kills," he continued. "Obedience that becomes a copy of what the other person says, infantilizes."

Braz de Aviz also told the sister leaders that "women's leadership needs to grow a lot in the church," referring to a remark made by Pope Paul VI during a session of the Second Vatican Council (1962-65) -- where the late pope asked the council fathers: "Where's the other 50 percent of humanity that isn't here?"

The Vatican mandate regarding LCWR, which was released in April 2012, appoints Seattle Archbishop Peter Sartain as the group's "archbishop delegate." It gives him final authority over its workings, and requires the group to revise its programs and statutes.

Braz de Aviz spoke Sunday in Italian with his words being simultaneously translated into seven other languages.

He said that his office -- which is tasked with overseeing the work an estimated 1.5 million sisters, brothers, and priests around the world in religious orders -- first learned of the move against the U.S. sisters' group in a meeting with the Vatican's Congregation for the Doctrine of the Faith after the formal report on the matter had been completed.

At that meeting, Braz de Aviz said, he told Cardinal William Levada, an American who has since retired as head of the doctrinal congregation, that the matter should have been discussed between the Vatican offices.

"We will obey what the Holy Father wants and what will be decided through you," Braz de Aviz told the sisters he had said to Levada. "But we must say that this material which should be discussed together has not been discussed together."

"I obeyed," Braz de Aviz continued telling the sisters. "But I had so much pain within me."

He also said it was the first time he was discussing the lack of consultation publicly, saying previously he "didn't have the courage to speak."

Speaking at a press conference following his talk, Braz de Aviz said that while his office "always obeys" the pope, "the problem very often is what kind of news goes to the Holy Father."

Saying that different Vatican offices will sometimes give the pope varying viewpoints on situations like the LCWR matter, Braz de Aviz said "there's a sort of like 'Who is going to win?'"

"This struggle of who is going to win is not good, he continued. "But Peter and Paul also had problems. The answer is: 'the Holy Spirit' will win."

LCWR's status with the Vatican has been the subject of much discussion at the global sisters' meeting. Franciscan Sr. Florence Deacon, LCWR's president, told the assembly in a speech Saturday that the situation with the group indicated that "serious misunderstandings" exist between Vatican officials and Catholic sisters.

Asked during his dialogue with the sisters if it would be possible to have a meeting between LCWR and Pope Francis to discuss the matter, Braz de Aviz responded: "I think so."

"But I know the pain is very big," he continued, repeating: "Very big."

"I don't think Pope Francis would be a stranger to you," Braz de Aviz told the sisters Sunday. However, the cardinal said, the pope "has confirmed the doctrinal review, he wants that to go forward."

Braz de Aviz was also asked about a separate investigation of U.S. Catholic sisters launched by his Vatican congregation under his predecessor, Cardinal Franc Rode.

That investigation, known as an apostolic visitation, examined individual orders of U.S. Catholic sisters and resulted in a detailed report that was quietly submitted to Rome in January 2012.

In his response, it was unclear whether Braz de Aviz was referring to the investigation of U.S. sisters, or a similar apostolic visitation ordered by Pope Benedict of the Irish church following wide reporting of issues of sex abuse there.

Referring to a visitation, Braz de Aviz said, a report "has been sent to the pope, it is up to him to see if he will make it public."

Earlier Sunday, Braz de Aviz had told the sister leaders during his homily at Mass with them that they are "co-essential" with the church's bishops and the two groups must "walk together" in their leadership.

"We need to walk together, following, listening to the Holy Spirit -- men and women together," he said during the homily.

Reflecting on Sunday's reading from the Acts of the Apostles, which recounts the apostles' decision to not require circumcision for Christians, Braz de Aviz said the account indicates the church has to discern when it is in a "new moment."

"This is something we always have to be doing in the church, to discern constantly in order to move forward," he said. "This also gives us the opportunity today, it seems to me, to understand the important question in our life as consecrated persons."

During his dialogue session with the sister leaders, Braz de Aviz spoke again about men and women in the church working together, referring to the Genesis account that "God created them, man and woman. God created them in the image and likeness of God."

That account, the cardinal said, emphasizes two things: "Man and woman are not God; they are creatures" and "man, without woman, is not humanity; and vice-versa."

Part of the struggles between men and women in church leadership, said Braz de Aviz, stem from a need to "reconstruct our relationships" with one another. "Our relationships," he said, "are sick, profoundly sick."

Regarding the advancement of women into church leadership positions, Braz de Aviz said "we can take a lot of steps in this direction" to create "a church more maternal" and not only paternal.

"The two aspects together would be much more balanced, much more human," he said. "We must not be afraid of this."

Rodriguez, formerly the minister general of the Orders of Friars Minor, was announced as the secretary for the Congregation for Religious April 6.

Pope Francis, Braz de Aviz said, asked him when making the decision: "Who do you want as your secretary? Give me three names."

"So I gave him three names," Braz de Aviz told the sister leaders. "But [the pope] said, 'Of the three, which is the one you want?' I said this one, Carballo. [The pope] said, 'Good, fine.' And he gave us Jose Carballo."

"It's a wonderful, simple way of doing things: I trust you, I trust Carballo, so that's it," Braz de Aviz said. "He doesn't complicate it."