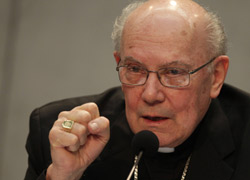 Cardinal William J. Levada at the press conference at the Vatican Oct. 20. (CNS/Reuters)

In a move with potentially sweeping implications for relations between the Catholic church and some 80 million Anglicans worldwide, the Vatican has announced the creation of new ecclesiastical structures to absorb disaffected Anglicans wishing to become Catholics. The structures will allow those Anglicans to hold onto their distinctive spiritual practices, including the ordination of married former Anglican clergy as Catholic priests.

Those structures would be open to members of the Episcopal Church in the United States, the main American branch of the worldwide Anglican Communion. American Episcopalians are said to number some 2.2 million.

Though the announcement did not single out any specific group of Anglicans, it responds to a request made two years ago by a breakaway group known as the “Traditional Anglican Communion,” a network claiming to represent some 400,000 Anglicans worldwide, including more than 5,000 in the United States, unhappy with liberalizing moves in the Anglican Communion, including the ordination of women as priests and bishops, the ordination of openly gay clergy and bishops, and the blessing of same-sex unions.

Rather than absorbing that bloc en masse, today's move creates the possibility that bishops' conferences around the world can create personal ordinariates, a special structure that's tantamount to a non-territorial diocese, to accept Anglicans under the leadership of a former Anglican minister who would be designated a bishop.

According to a Vatican “note” released this morning, former Anglican clergy who are married may serve as priests in the new ordinariates, but they may not be ordained as bishops. Seminarians for the new ordinariates must be trained alongside other Catholic seminarians, though they may have separate houses of formation.

The details will be presented in a new apostolic constitution from Pope Benedict XVI, expected to be issued shortly. Popes issue apostolic onstitutions in order to amend the church's Code of Canon Law, in this case to create new legal structures.

The Vatican note described the new “personal ordinariates” as similar to the structures created throughout the world to provide pastoral care for members of the military and their families. The structures are in effect separate dioceses, presided over by a bishop and with their own priests, seminarians, and faithful.

A personal ordinariate is also similar to the canonical status of “personal prelature,” currently held by only one Catholic group: Opus Dei.

The note said the ordinariates will be created in consultation with the national bishops’ conference of a given country. Importantly, the apostolic constitution apparently will not itself erect any new structures; it will instead make them possible "as needed", but it will apparently be up to local bishops to decide if such a structure will be created in any given country.

Such an opening to disgruntled Anglican conservatives has long been rumored, with some fearing potentially negative repercussions in relations with the Anglican Communion – whose leadership might see it as “poaching.”

Last week, Cardinal Walter Kasper, the Vatican’s top ecumenical official, went out of his way during a Vatican news conference to insist that, “We are not fishing in the Anglican lake.” Yet out of respect for freedom of religion, Kasper said, the Catholic church has a responsibility to respond when someone knocks on its door.

In an unusual move, the Vatican this morning issued a joint statement from the Catholic Archbishop of Westminster, Vincent Nichols, and the Anglican Archbishop of Canterbury, Rowan Williams, attempting to calm the waters.

“The apostolic constitution [creating the new structures] is further recognition of the substantial overlap in faith, doctrine and spirituality between the Catholic Church and the Anglican tradition,” that statement said. “Without the dialogues of the past forty years, this recognition would not have been possible, nor would hopes for full visible unity have been nurtured. In this sense, this apostolic constitution is one consequence of ecumenical dialogue between the Catholic Church and the Anglican Communion.”

“With God’s grace and prayer, we are determined that our on-going mutual commitment and consultation on these and other matters should continue to be strengthened,” Nichols and Williams said.

“The provision of this new structure is consistent with the commitment to ecumenical dialogue, which continues to be a priority for the Catholic Church, particularly through the efforts of the Pontifical Council for the Promotion of Christian Unity,” it said.

One apparent implication of today's announcement is that the current leader of the Traditional Anglican Communion, Australian Anglican Archbishop John Hepworth, could not be recognized as a bishop in a new personal ordinariate. Hepworth, a former Catholic priest, has been married twice and has three children.