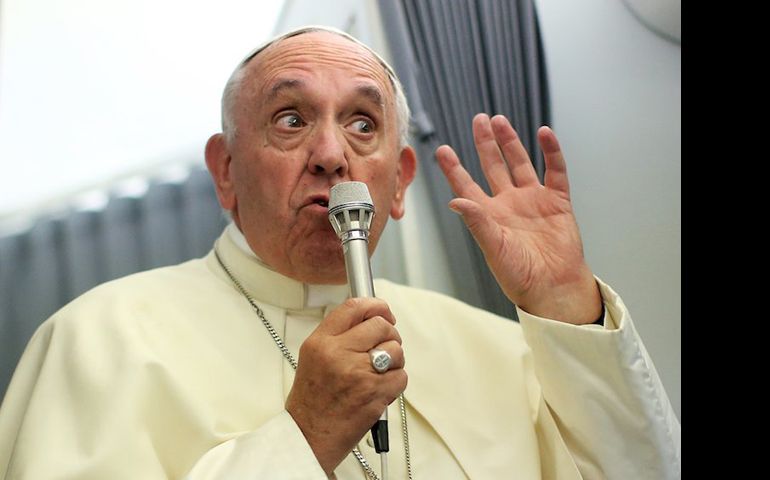 Pope Francis speaks to journalists onboard the papal plane during his return to Rome, from Asuncion, Paraguay, on July 12, 2015. (Alessandro Bianchi, Reuters)

The streamlined marriage annulment procedures unveiled by the Vatican are aimed at simplifying what is often a tedious gauntlet of red tape. But it's not clear how much effect the reforms ordered by Pope Francis will have in the U.S., where about half of all annulments are granted even though American Catholics are just 6 percent of the global church.

That's largely because in recent decades American dioceses have taken a number of steps to make the process less cumbersome and time-consuming, some of which were reflected in the new procedures announced Sept. 8 in Rome.

The new rules, the most sweeping reform in centuries, eliminate an automatic review of any "decree of nullity" by a second panel of church judges, and they provide for what is being called a fast-track option that allows for an annulment to be granted by the local bishop within 45 days if both spouses request an annulment or don't oppose it.

Annulment rulings can currently take up to a year, or more, and cost upwards of $1,000, though in the U.S. fees can be waived.

In the U.S., 25 percent of Catholics have been divorced; 26 percent of them say they sought annulment, according to Pew Research.

Catholics who are divorced and remarried without an annulment are barred from receiving Communion because they are considered to be committing adultery. It's a sensitive issue that is among several contentious issues leaders of the world's bishops will debate at a Vatican summit next month, called a synod, presided over by Francis.

The Catholic Church does not allow divorce but has long recognized that in some cases a marriage was never valid -- if one party, for example, never intended to be faithful or was still married to another person at the time, or if impotence prevented consummation of the marriage or, most commonly, if one or both parties were judged too psychologically immature at the time to understand what they were doing.

Francis has said that half of all marriages in the Buenos Aires archdiocese, which he headed before being elected pope in 2013, were invalid because the husband and wife did not view their vows as a lifelong commitment. 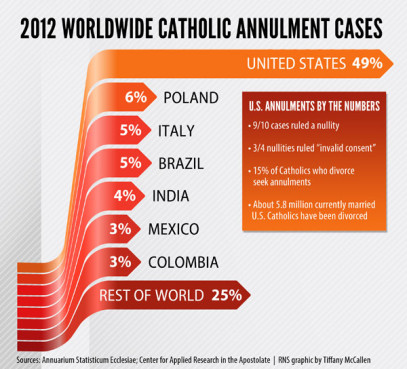 Still, critics see the annulment process as tantamount to "Catholic divorce." They often cite the cost and complexity of the process, and the fact that in the past annulments have been granted to couples -- some of them wealthy and well-known -- who have been married for decades and have had several children together.

In the two documents detailing the changes, Francis reaffirmed church teaching on the indissolubility of marriage but said "the impulse for reform is fed by the enormous numbers of the faithful who … are too often alienated from the juridical structures of the church."

The streamlining is in keeping with the pope's focus on the church to reflect the mercy of God, and to veer away from a focus on what he has called "small-minded rules." In fact, annulment reform was done just a year after Francis ordered it, a remarkably speedy turnaround for the snail's-pace Vatican.

"It is a democratizing move focused on easing the course of reintegration into the church for women, in particular," said Candida Moss, a professor of New Testament and early Christianity at the University of Notre Dame. "His actions are propelled by compassion and pragmatism: He recognizes the dangers of spousal abuse and the reality that many modern marriages are undertaken without full consideration."

Moss also noted that the timing of the moves is important because it comes ahead of Francis' Sept. 22-27 visit to the U.S., his first. "Francis has set the agenda for these conversations and smoothed the path for his visit later this month," Moss said. "The messaging is clear: Francis doesn't want to change Church teaching but he doesn't want to focus on punishing people either."

The new procedures also demonstrate Francis' desire to decentralize authority in the church; one of the main features of the new reform is that, while an appeal to Rome remains an option, local bishops are given more leeway to decide and dispense with annulment cases.

On this issue, bishops around the world may be looking to the American hierarchy for guidance.

Some of the steps announced this week were used on a trial basis decades ago by the U.S. bishops, who have also led in efforts to reduce the complexity of the process.

The Rev. John Beal, a leading canon lawyer who teaches at Catholic University of America, said recently that American church tribunals in each diocese have allowed for applicants to submit written affidavits or even use Skype instead of having to appear for every hearing in person.

"We chop off a lot of formalities like taking oaths and other things that give a rough juridical edge to the process," Beal told National Catholic Reporter, noting that many other countries have not taken those steps.

That's one reason why American accounted for nearly half of the nearly 50,000 annulment cases launched each year by church tribunals around the world in 2014. Nearly nine in 10 cases in the U.S. result in an annulment, though that rate is lower in other regions.

The elimination of the automatic appeal could speed up the process significantly, as could another trend that Pope Francis encouraged again in his announcement this week: making the annulment process free.

In the past year, as many as a dozen of the nearly 200 American dioceses have waived all fees for the annulment process. The cost has ranged anywhere from $250 to just over $1,000, and fees were often waived for hardship reasons.

But there seems to be a trend toward automatically eliminating fees, which could increase following Tuesday's decrees by the pope.

Whether any of these changes will result in more annulments, or will draw catholics back to the sacraments, is unclear.

Annulments are declining in the U.S. Just over 23,000 cases were begun in 2014, down from nearly 61,000 in 1985. Church officials note that fewer Catholics are getting married in the church, more are living together without getting married, and many who divorce see no reason for an annulment.

Here is a list of U.S. dioceses, compiled by RNS and using information from the U.S. Conference of Catholic Bishops, that waive annulment fees. The list will be updated as information is received:

Despite low Catholic marriage numbers, some see trend turning around

Pope urges bishops to exercise authority as judges in annulments