Women may come out winners in the Synod for Africa 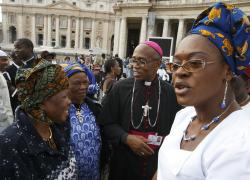 Coverage of the final conclusions from the Synod for Africa so far has focused mostly on the African bishops’ stinging rebuke of corrupt politicians -– in effect, telling them to repent or get out. In all honesty, however, there’s relatively little the Catholic church can do, at least in any direct sense, to control the behavior of national leaders in Africa or anywhere else.

Proof of the point is that the first Synod for Africa in 1994 issued a similar call for more ethical governance, and it’s not clear that such statements have changed very much.

There is a fair bit that Africa’s bishops can do, however, to shape the life of the Catholic church on the continent, and that may be where the synod’s concluding message, as well as the 57 propositions for action submitted to Pope Benedict XVI, have their most immediate impact.

On that front, if there's one big idea that seemed to surface, it was a call to take women more seriously -- in society, and also in the church.

In keeping with the candor exhibited throughout the synod about the church’s need to confront its own failures, the bishops called for:

Those steps, the bishops suggested, are essential to making the Catholic church a more credible voice for “reconciliation, justice and peace” in Africa, which was the synod’s official theme.

It remains to be seen to what extent Africa’s bishops will follow through on these pledges, but the results of the Synod for Africa nonetheless amount to an ambitious reform program for Catholicism on the continent where it has seen its most explosive growth. Given that Africa’s 165 million Catholics are destined to play a steadily more important role in setting the tone for the global church, momentum created by these measures may not be confined solely to Africa.

The second Synod for Africa was held in Rome Oct. 4-25. Though the synod’s final propositions are formally styled as private proposals for the pope’s eyes only, Benedict XVI decided to publish the list, as he did following the Synod on the Bible in 2008. (In some ways, that decision was a simple concession to reality; during past synods, when the propositions were allegedly secret, they usually appeared in Italian news agencies almost immediately afterward.)

To be sure, the synod’s theme ensured that the meeting had a largely ad extra focus, meaning that it was primarily concerned with the broader social, political and cultural situation in Africa. At that level, the roughly 300 bishops, priests, religious and laity who took part seemed to want to walk a fine line -- acknowledging that “many of our people are still left to wallow in poverty and misery, wars and conflicts, crisis and chaos,” but at the same time insisting that Africa isn’t just a bad news story. They pointed to progress in some places in terms of economic development, democracy, and respect for the rule of law.

The bishops reserved their sharpest language for corrupt public officials, especially Catholics, who they charged are engaged in a “tragic complicity and criminal conspiracy” with foreign interests. They condemned “politicians who betray and sell out their nations, dirty business people who collude with rapacious multi-nationals, African arms dealers and traffickers who thrive on small arms that cause great havoc on human lives, and local agents of some international organizations who get paid for peddling toxic ideologies that they don’t believe in.”

“What has happened,” they pointedly asked, “to our traditional African sense of shame?”

“Many Catholics in high office have fallen woefully short,” the synod’s final statement said. “The synod calls on such people to repent, or quit the public arena and stop causing havoc to the people and giving the Catholic church a bad name.”

Beyond better governance, the bishops called for:

The bishops clearly rejected condoms as part of their anti-HIV/AIDS strategy, instead endorsing programs of abstinence and fidelity. Speaking directly to African youth, they said: “Let no one deceive you into thinking that you cannot control yourselves.”

While the bishops can act as advocates on those matters on the public stage, it’s the internal management of the church where their impact can be the most tangible in the short run.

Pointedly, the synod’s final statement admitted that disunity among Africa’s bishops, often fueled by ethnic rivalries, “wastes energies, frustrates efforts and gives room for the enemies of the Church to neutralize our witness.”

The bishops also called upon priests and other church leaders to “responsible stewardship” of money, insisting that they be models of “transparency and accountability.”

In a recommendation that diocesan bishops ought to be able to implement immediately, the bishops endorsed “greater integration of women into church structures and decision-making processes” and “setting up of commissions on the diocesan and national levels to address women’s issues, to help them better carry out their mission in the church and society.”

The bishops also called for the “full integration” of persons with disabilities “in society and in our ecclesial communities,” not just in the sense of physical access, but also as part of “pastoral planning in our dioceses and our local church communities.”

The full text of the propositions from the Synod for Africa may be found here: The Propositions.

The synod’s final message may be found at: Final Message

Vatican | Women may come out winners in the Synod for Africa

Francis: 'For God, no one is definitively lost. Never!'