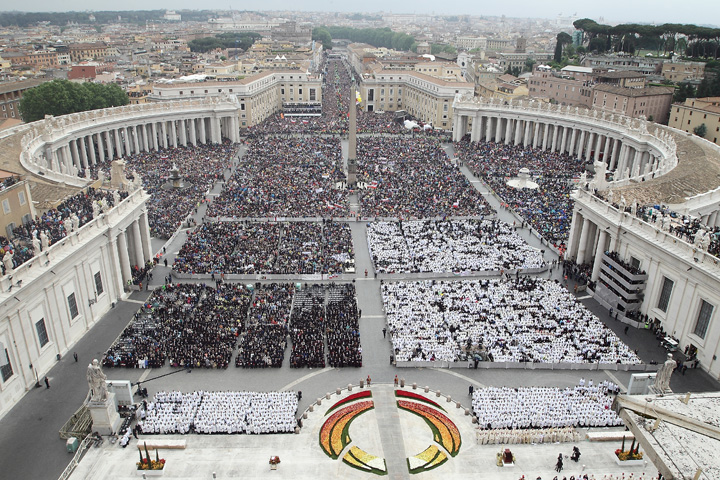 A large crowd is seen as Pope Francis celebrates the canonization Mass for Sts. John XXIII and John Paul II on Sunday in St. Peter's Square at the Vatican. (CNS/Evandro Inetti, pool)

And just like that, 56 years of church history -- from the unexpected calling of the Second Vatican Council through the sometimes tumultuous and radical response to its modernizing moves for Catholics around the world -- were wrapped up in about six minutes.

That's how long it took Sunday for Pope Francis to formally declare his predecessors John XXIII and John Paul II saints of the Catholic church, from the first prayers of the formal canonization rite to the formal decree.

That decree, made in Latin by Francis in front of an estimated 500,000 in a cloudy and drizzly St. Peter's Square, was simple and direct. Having "sought the counsel of many of our brother bishops," Francis said, "we declare and define Blessed John XXIII and John Paul II be saints and we enroll them among the saints, decreeing that they are to be venerated as such by the whole church."

While the Vatican has sought this week to tie the popes together by their work shepherding the church through the 20th century -- framing them as two bookends of church modernization and reform -- Catholics in many parts of the world see John as the man who started that reform but John Paul as the one who harnessed or even rolled parts of it back.

That dual dynamic was echoed Sunday by the presence at the canonization ceremony of two popes -- Francis, who led the event, and his immediate predecessor, retired Pope Benedict XVI, who concelebrated with Francis at Mass along with some 150 cardinals, 700 bishops and 6,000 priests.

For his part Sunday, Francis said during his homily at the Mass that John and John Paul had "cooperated with the Holy Spirit in renewing and updating the church" following the council, the 1962-65 event that drew bishops around the world to the Vatican and led to reforms like the use of vernacular languages during liturgies and the redefinition of the church as the "People of God."

Francis said in convening the council, John "showed an exquisite openness to the Holy Spirit."

"[John] let himself be led, and he was for the church a pastor, a servant-leader," Francis said. "This was his great service to the church; he was the pope of openness to the Spirit."

"In his own service to the People of God, John Paul II was the pope of the family," Francis continued.

Mentioning that he has called a worldwide meeting of bishops at the Vatican for this October on the subject of the church's pastoral practices toward the family, Francis said he was "particularly happy" to point out John Paul's dedication to family issues.

"It is surely a journey which, from his place in heaven, he guides and sustains," Francis said.

"May these two new saints and shepherds of God's people intercede for the church, so that during this two-year journey toward the synod, she may be open to the Holy Spirit in pastoral service to the family," the pope concluded.

Beyond wrapping together the two new saints as shepherds of the 1960s church council, the Vatican was also working throughout the week to defend John Paul's record in responding to the continuing clergy sexual abuse crisis throughout the world.

As the second-longest-serving pontiff in history -- leading the church for 27 years until his 2005 death -- the Vatican was asked particularly at briefings throughout the week if the late pope was able to appropriately respond to reports of clergy sexual abuse toward the end of his life, when he was suffering from Parkinson's disease.

Former Vatican spokesman Joaquín Navarro-Valls said Friday that while the late pontiff did not at first understand the gravity of the sexual abuse crisis, he began responding "immediately" following the reports of clergy sexual abuse in Boston in 2002. Dominican Fr. Thomas Doyle, an abuse survivor advocate who served in the Vatican's embassy to the U.S. in the 1980s, fiercely disputed those claims in an NCR column.

Jesuit Fr. Gerald O'Collins*, a prominent Australian academic who in 2008 published The Legacy of John Paul II, said in an email earlier in the week that while John Paul was not perfect, he was holy.

"[John Paul] was saintly and heroic or saintly heroic, but not perfect," said O'Collins, who is currently a research professor at the Jesuit Theological College in Australia's southeastern Victoria state.

"He made me realize the difference between being saintly and being perfect," O'Collins said.

Despite questions about John Paul's handling of the crisis and Francis' agenda in canonizing the two late popes together, pilgrims who came from around the world for the Vatican ceremony said they wished to honor the legacies of both John and John Paul.

Most evident in the crowd in St. Peter's on Sunday were the numbers from Poland, John Paul's native country. Countless Polish flags flew above the crowd during the ceremony. Throughout Saturday night, Poles could be seen sleeping on mats and in sleeping bags on streets all around the Vatican -- or in about a dozen all-night vigils organized by the Rome diocese.

Adrianna Jaroszewska, a young woman from the country, said Saturday she felt she had to be in Rome for the event.

"My heart tells me that," said Jaroszewska, who was standing in the Square at about noon with 50 others from her parish in Poland. "Because we can't meet our papa in life, so we have to come here to honor him. This is something in our hearts we must do. I know that sounds simple, but it is right."

Logistics for the Sunday's event, which the Vatican said attracted a total of some 800,000 people around Rome and more than 40 heads of state along with a near equal number of official government representatives, were massive.

Streets around the Vatican were closed starting early Sunday morning, with officials saying there were approximately 2,200 local police deployed to control the crowds and to prevent too many from entering St. Peter's Square.

The Rome diocese and Rome government also had 14 medical advanced medical centers built, about 80 ambulances on call and a special point for emergency resuscitation.

An estimated 980 public toilets were also been placed near St. Peter's Square, with some even sitting under the grand 17th-century colonnades designed by Gian Lorenzo Bernini.

They also set up 19 giant screens in different places throughout the city to allow people to watch the event away from the Vatican. The road leading to Rome's ancient Colosseum -- where the remains of the Imperial Forum are -- was closed to traffic, allowing people to gather there to try and avoid the crowd at the Vatican.

The atmosphere throughout Sunday's event was a bit somber and subdued. According to the rite of canonization, Francis was asked three times by Cardinal Angelo Amato, the head of the Vatican Congregation for the Causes of Saints, to declare John and John Paul saints. Francis then took a clearly visible moment of breath and silence before issuing the Latin decree formalizing their sainthood.

Afterward, there was no shouting or celebration from the crowd at St. Peter's, only polite clapping.

An indication, perhaps, that as pilgrims processed out of St. Peter's Square on Sunday afternoon -- maybe first waiting in the long lines for a chance to enter the basilica to pray before the tombs of the new pope saints -- many are aware that a multitude of questions remain for the Catholic church, and more specifically for Francis.

Primarily: Now that he has sainted the man who opened the council and the man who over 27 years most shaped its reforms, how will he continue to direct its influence over the church?

That answer may come most clearly during October's meeting of bishops, which is expected to discuss a number of sometimes controversial subjects -- including the question of Communion for divorced and remarried people.

In other words, while Francis was able to wrap together 56 years in just six minutes Sunday, it will likely be many years before we know the full impact of the council -- and of the man now leading its continuing reforms.

*An earlier version of this story misspelled O'Collins' name.

A version of this story appeared in the May 9-22, 2014 print issue under the headline: Wrapping up decades of change, Francis saints two popes.