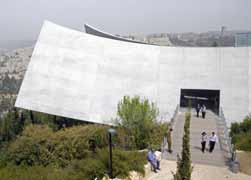 Pope Benedict XVI has long been a figure who draws mixed reactions, with many admiring his clarity and intellectual depth, and others turned off by his traditionalism and occasional lack of a popular touch.

The pontiff's keenly anticipated visit today to Yad Vashem, the main Israeli Holocaust memorial, is likely to become another chapter in Benedict's mixed reviews. Some are likely to see it as a stirring poetic meditation on memory and justice, while others will probably be more struck what the pope didn't say than what he did.

For one thing, there's no explicit expression of regret for Christian anti-Semitism, no allusion to the role that currents of thought within Christianity about Jews and Judaism may have played in preparing the soil for the Holocaust.

The omission is all the more striking given that on other occasions, Benedict XVI has acknowledged precisely that point. In a 1990 essay in L'Osservatore Romano, for example, then-Cardinal Joseph Ratzinger wrote of the hatred of Jews which led to the Holocaust, "it cannot be denied that a certain insufficient resistance to its atrocity on the part of Christians can be explained by an inherited anti-Judaism present in the hearts of not a few Christians."

Pope John Paul II, during his own visit to Yad Vashem in 2000, said that the Catholic church "is deeply saddened by the hatred, acts of persecution and displays of anti-Semitism directed against the Jews by Christians at any time and in any place."

In Benedict's address today, there was also no direct reference to the recent controversy involving Bishop Richard Williamson, a member of the breakaway traditionalist society of St. Pius X, whose excommunication, along with three other traditionalist prelates, was recently lifted by Pope Benedict. That act became a cause célèbre because Williamson has a long record of minimizing the Holocaust, including the assertion that the Nazis did not use gas chambers and that far fewer than six million Jews died in the Holocaust.

Benedict did, however, insist that the suffering of the "millions of Jews" who perished should "never be denied, belittled or forgotten."

Equally striking, the pontiff never alluded to his own personal experience of the Second World War. The young Joseph Ratzinger was briefly and involuntarily enrolled in the Hitler Youth, and was later drafted into the German army. He ended the war in an American prisoner of war camp near Ulm, Germany.

Generally speaking, Benedict XVI does not draw upon his own biography in public in the style of John Paul, who recalled his experience growing up in Poland under the Nazis during his 2000 address at Yad Vashem. Nevertheless, if ever there were an occasion that seemed to beckon such a touch, a German pontiff visiting Yad Vashem would seem to be it.

Moreover, it's not that Benedict XVI has a blanket policy against personal references. During his recent trip to Angola, he said that he could identify with their experience of civil war because of his own memories as a youth in war-torn Germany.

Early indications are that even longtime Jewish friends of the Catholic church may be left slightly cold by Benedict's words.

Rabbi David Rosen, a longtime veteran of Jewish-Catholic dialogue, told NCR this afternoon that the most important thing is that Benedict went to Yad Vashem in the first place, and that his comments on Holocaust denial were valuable.

Nonetheless, Rosen said, "it's disappointing that he didn't use this opportunity to go further, and acknowledge the tragic connection between the teaching of contempt and Jewish suffering."

On the other hand, some Jewish leaders seemed to stress gratitude for Benedict’s presence at Yad Vashem, almost apart from what he said.

Schneier also said that the pope’s speech at Yad Vashem should be read in the context of his strong words this morning at the Tel Aviv airport about fighting anti-Semitism, as well as his reference to the bonds between Christianity and Judaism at Mount Nebo in Jordan just days ago.

This is the second occasion when a speech by Benedict XVI at a key site associated with the Holocaust has drawn mixed reviews. When he visited Auschwitz three years ago, he suggested that the Nazis attempt to eradicate the Jews was ultimately an attempt to eradicate God, and thus to destroy "the tap root of the Christian faith." Some critics took that as an attempt to minimize the uniqueness of Jewish suffering in the Holocaust.

Benedict said that standing at Yad Vashem's reflecting pool and seeing the faces of victims, "their cry still echoes in our hearts." He pledged that the Catholic church "is committed to praying and working tirelessly to ensure that hatred will never reign in the hearts of men again."

"It is a cry raised against every act of injustice and violence," the pope said. "It is a perpetual reproach against the spilling of innocent blood."