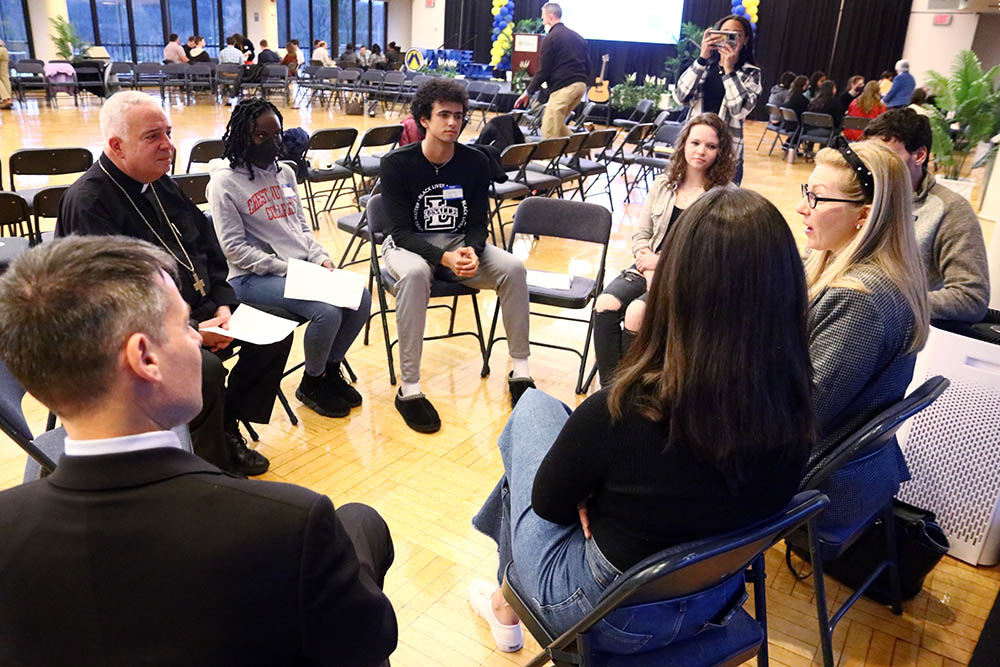 Catholic academics, theologians, clergy sex abuse survivors, and advocates for the inclusion of women and LGBTQ individuals in the U.S. Catholic Church praised the forthrightness and transparency with which the Vatican's new synod document engages controversial topics that in years past would have been off-limits for discussion.

"This is really Pope Francis enacting a post-conciliar ecclesiology. It's his contribution to making space for a listening church to really emerge," said Natalia Imperatori-Lee, chair of the religious studies department at Manhattan College.

The 45-page working document will guide the continental phase of the 2023-24 Synod of Bishops in Rome. The document distills several major themes that emerged in listening sessions with millions of Catholics across the world, who over the past year articulated a desire for a "listening" church that reaches out to the marginalized, especially the LGBTQ community, and that allows women to serve in leadership positions, including ordained ministry.

Imperatori-Lee said the Vatican's Oct. 27 release of the document, titled "Enlarge the Space of Your Tent," marks "a real Vatican II moment for the church and a real moment of reception for the council."

"You get the sense that the people who prepared this document didn't go in with an agenda, but rather worked really hard to gather up the insights and to see really where some of these contributions rhymed," Imperatori-Lee said.

In dedicating significant attention to the role of women in the Catholic Church, the synod document noted that the issue was highlighted in the synthesis reports compiled by episcopal conferences from every continent. 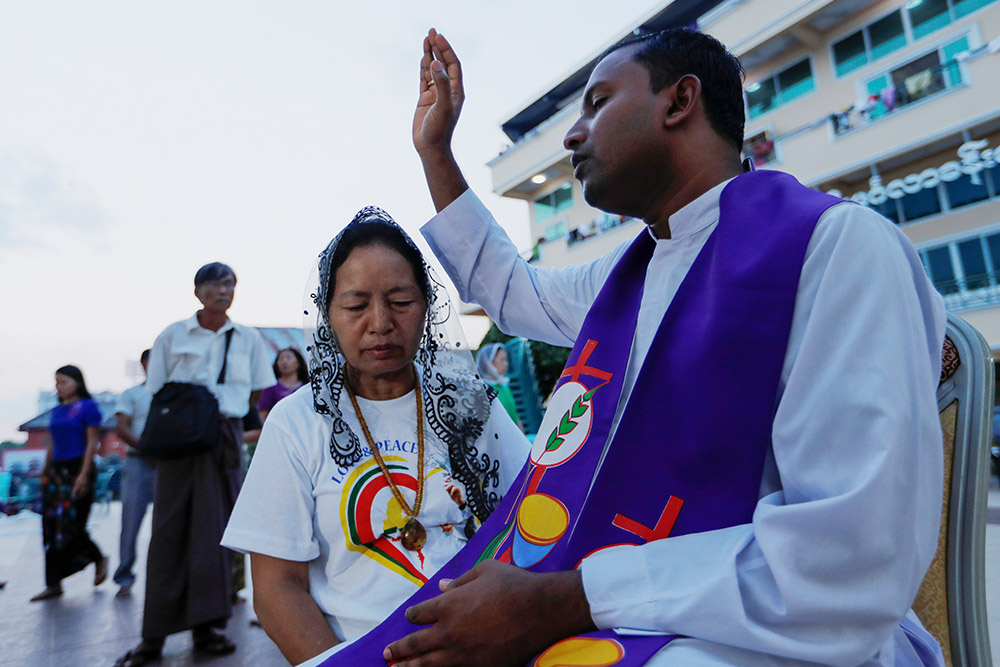 A woman offers her confession to a priest in front of St. Anthony Catholic Church in Yangon, Myanmar, Nov. 28, 2017. The issue of the role of women in the church came up repeatedly in listening sessions preparing for the Synod of Bishops on synodality. (CNS/Reuters/Jorge Silva)

"It's vitally important that the document does not frame the question of women in the church as a 'Western issue,' as we see so often," Susan Reynolds, a Catholic studies professor at Emory University in Atlanta, told NCR. "The document roots the discussion of women in 'our common baptismal dignity,' centering reports from the Holy Land, Korea, New Zealand and beyond."

Catholics across the globe said they want women to have more leadership roles at all levels in the church, including ordained ministry. The document also acknowledges "a great diversity of opinion," in which some synod participants believe ordaining women is a matter of justice while others consider the issue to be a settled matter of Catholic teaching.

Still, the fact that an official Vatican document acknowledged the women's ordination debate and the widespread differences of opinion among Catholics on the matter encouraged Kate McElwee, executive director of the Women's Ordination Conference, a Washington D.C.-based organization that advocates for women to be ordained deacons, priests and bishops in the Catholic Church.

"It really does feel like a landmark moment for the church," McElwee said. "It feels like today the church shows it has the capacity to listen to its people, which in its own way is a bit revolutionary.

"Despite a lot of skepticism and reluctance to engage in synodality in the United States and throughout the world, the clear call for women's inclusion broke through, and to me that's very encouraging," McElwee added.

On the issue of clergy sex abuse, a scandal that continues to vex the universal church more than 20 years after The Boston Globe exposed the scope of the crisis in the Boston Archdiocese, the document acknowledges the lack of trust and credibility resulting from those crimes and institutional cover-ups.

"While many in the Church talk about the abuse crisis as a problem of the past, the document calls this reality an 'open wound that continues to inflict pain' on victims, their loved ones and the entire community," said Sara Larson, executive director of Awake Milwaukee, a lay-led advocacy group that supports survivors of clergy sex abuse.

Larson told NCR in an email that the document's language on the clergy sex abuse crisis "certainly reflects the experience of Awake and the contribution we submitted from our own synodal conversations with abuse survivors and others who care about this issue."

The document also acknowledges that Catholics across the world want the church to foster "a more meaningful dialogue" and a welcoming space for those whose intimate relationships are at tension with official church doctrine, including LGBTQ people.

That the document uses "LGBTQ" — and "LGBTQIA" in one instance — instead of citing terms such as "same-sex attracted" or conflating it with "gender ideology" was itself a cause for celebration among groups like New Ways Ministry, a Maryland-based organization that advocates for LGBTQ Catholics.

" 'LGBTQ' now seems here to stay, and it is a sign of respect from the Vatican," New Ways Ministry said Oct. 27 in a prepared statement.

Marianne Duddy-Burke, executive director of DignityUSA, a Massachusetts-based organization that also advocates for LGBTQ Catholics, told NCR that the document's tone indicated to her that church leaders have been listening to the concerns and experiences that LGBTQ Catholics and their relatives shared in their listening sessions.

"The acknowledgement that LGBTQI and their families often do not feel at home in the church, that we and others whose loving relationships have been dismissed by the church have experienced a lot of pain, that we have a credible claim on church membership and full inclusion, that was really refreshing to hear," Duddy-Burke said.

The document elicited negative comments from some conservative Catholics who have criticized the synodal process. Raymond Arroyo — the EWTN anchor on whose show Cardinal Gerhard Müller, former prefect of the Vatican's Congregation for the Doctrine of the Faith, on Oct. 6 likened the synod to "a hostile takeover" of the church — on Oct. 27 tweeted about the "scant participation in these local surveys" to downplay the synod's significance.

Stephen White, executive director of the Catholic Project at the Catholic University of America, offered a nuanced critique of the process. He told NCR in an email that synodality helps all the baptized realize their responsibility for the church's mission, as he sees synodality to be "Lumen Gentium in action," referring to the Second Vatican Council's Dogmatic Constitution on the Church.

"That said, the focus of the synod thus far, and of the document in particular, has been largely horizontal and subjective: How do we get the most people to feel listened to and welcome? These are important dimensions in the life of the church, no doubt. But they don't get to the heart of the church's mission," White said.

Massimo Faggioli, a theologian* and church historian at Villanova University, told NCR that his major criticism of the process is that the timeline for the synod's continental phase is "extremely short," adding that bishops the world over will need to complete that work by the end of March 2023.

"I don't know how realistic it will be to have all these discussions in five months. I believe that will be a big challenge," said Faggioli, who described the Vatican's new document as important because it is a "faithful picture" of what the synod's participants have actually been saying.

"It will be more difficult to ignore all that, or to keep the status quo," Faggioli said. "This is why some bishops and some cardinals are worried or afraid, because they know that after this, it will be hard to say that something like the issue of women in the church is the concern of a small minority. It is obviously a global issue now, with very different sensibilities yes, but it is no longer a North American or European thing."

*This story has been updated to specify that Faggioli is a theologian.