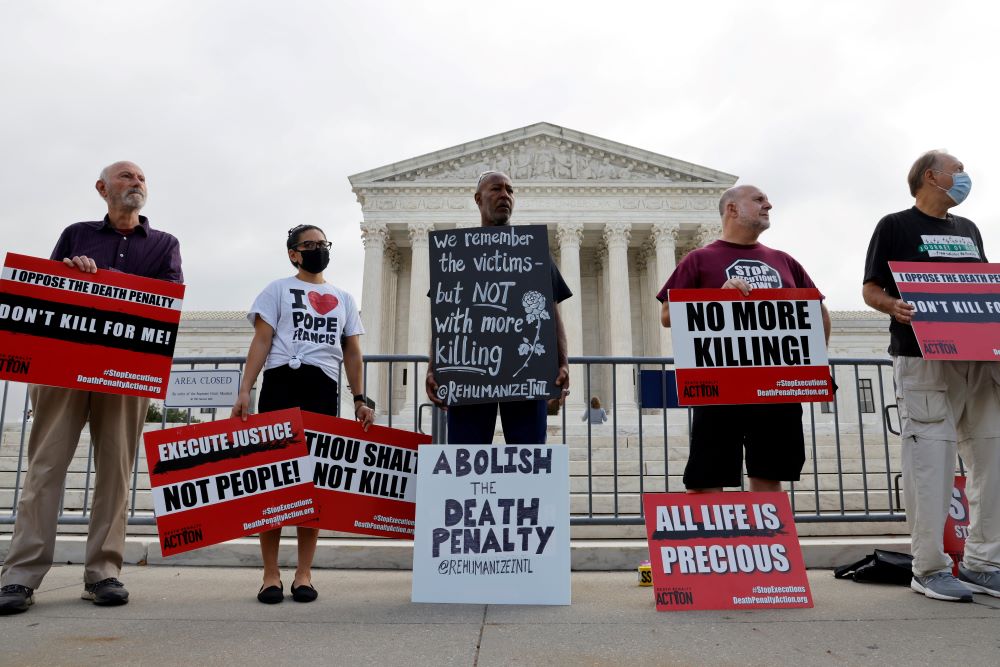 Death penalty protesters are seen outside the U.S. Supreme Court building in Washington Oct. 13, 2021. With Roe v. Wade overturned, the president of the Pontifical Academy for Life, urges Catholics to continue fighting to protect life in all its forms, which includes advocating for tighter gun laws and ending the death penalty. (CNS/Reuters/Jonathan Ernst)

After the U.S. Supreme Court overturned Roe v. Wade, the Vatican's top pro-life official is urging Catholics to fight now to make access to guns "as complicated and rare as possible."

Italian Archbishop Vincenzo Paglia, president of the Pontifical Academy for Life, said Catholics must continue fighting to protect life in all its forms, which includes advocating for tighter gun laws and against the death penalty.

"Having too many guns at hand is a grave threat to life," Paglia said in a June 27 interview in his Vatican office, adding: "We need to fight so that the death penalty may be abolished together with abortion."

Paglia, whose academy researches and promotes the Catholic Church's pro-life ethic, added that Catholics must work so "that the lives of the disabled, of immigrants, be protected and guarded, because every human life is precious before God and before human beings." 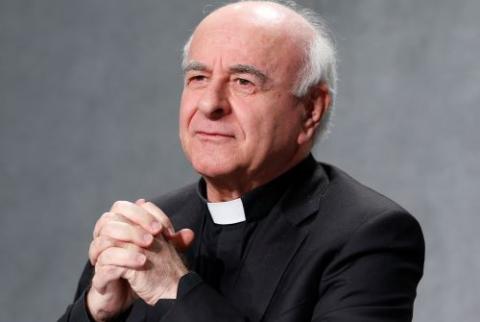 The comments signal hope in Rome that American Catholics will begin to shift the aims of their social advocacy after the Court released its June 24 ruling in Dobbs v. Jackson Women's Health Organization, which abolished federal protections for abortion rights and effectively returned the issue to state legislatures. Abortion is now expected to be illegal or severely limited in about half of the 50 states.

While Pope Francis has been clear in condemning abortion on numerous occasions, the Vatican has repeatedly pushed for a pro-life message that extends to other life-related issues beyond solely ending abortion, which has been a focus for the American church.

"The conversation should be directed this way, and Pope Francis is a reference point for everyone," Paglia said.

Among those concerns are weakening families and a lack of proper care for the elderly in society, a topic that has inspired the pope's current catechesis series on old age, which the pontiff delivers in his weekly audiences in St. Peter's Square.

'I know it's very hard, but a constructive dialogue is essential.'
— Archbishop Vincenzo Paglia

In a June 24 statement published in light of the Supreme Court's decision, the Pontifical Academy for Life had also emphasized the need for "solid assistance to mothers, couples, and the unborn child that involved the whole community, encouraging the possibility for mothers in difficulty to carry on with the pregnancy and to entrust the child to those who can guarantee the child's growth" after the Supreme Court overturned Roe.

In the interview, Paglia said that after Roe, society has an increased responsibility to "protect the rights of women, their desire for motherhood, and to promote the conditions to allow for that." Catholics in particular, he said, must work "to overcome the sometimes very serious inequalities and injustices, that favor the choice of abortion," and help create the conditions for women who want to have a child to carry their pregnancies to term.

He also called for proper sexual education that teaches each person to live out their sexuality "with the awareness of its implications."

The archbishop also urged Catholics to help form a society where "every will for abortion may be transformed into a possible desire for pregnancy."

While Catholics played a significant role in the effort that ultimately resulted in the fall of Roe (five of the six justices who voted in favor of Dobbs are Catholic), Paglia asked those celebrating the decision to not completely shut themselves off from those on the other side.

"The fact that the ruling has created such a strong debate indicates that it is about an issue that deeply touches people's consciences and the social fabric," he said, "one must return to the subject as calm and peacefully as possible. I know it's very hard, but a constructive dialogue is essential."

The archbishop said the post-Roe era in the United States is an inflection point for the pro-life movement worldwide: a test as to whether the enthusiasm that the American church applied to restricting abortion will also carry over to other urgent pro-life matters, such as gun control and caring for migrants.

"If we don't defend every life, and we don't defend it in all of its expressions, I don't think we will be credible," said Paglia, "and the world needs credibility from those who love life and defend it."