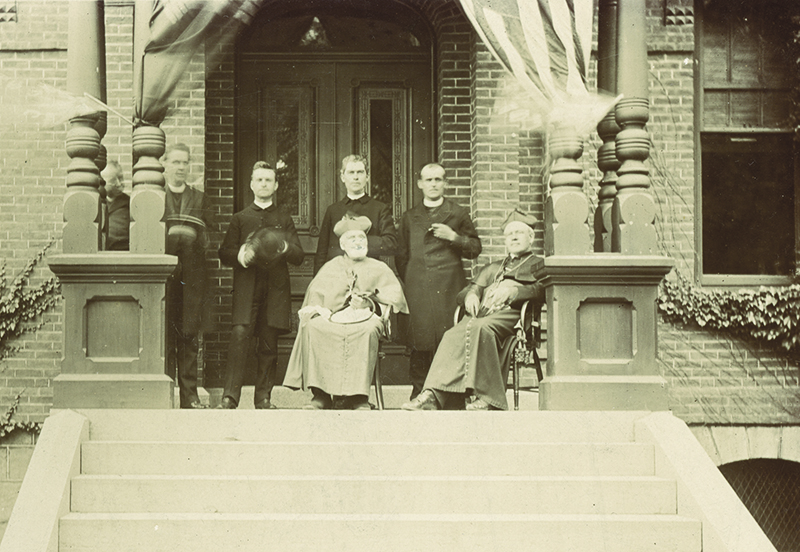 In this 1899 historical photo, Bishop Louis deGoesbriand of Burlington, Vt., center, watches a parade from the front of the bishop's residence. This is believed to have been his last public appearance. He was bishop of Burlington from 1853 until his death in 1899. A cause for his canonization has been opened. (CNS/Diocese of Burlington Archives)

Bishop Christopher Coyne made the official announcement at the chrism Mass April 16 at St. Joseph Cathedral in Burlington.

"He was known to be a holy and simple man," he said of Bishop Louis deGoesbriand. "He died well loved by many."

Saying that a saint can come from anywhere, Coyne said it would "be nice to have our own local saint."

Msgr. John McDermott, vicar general for the diocese, read the official request to open the cause of canonization on behalf of the diocese, recognizing deGoesbriand's heroic life of holiness and virtue.

"The first step, after the announcement of the process, is to develop and foster the cult/devotion of the faithful toward Bishop deGoesbriand, McDermott told Vermont Catholic, Burlington's diocesan magazine.

Born in France, deGoesbriand devoted his priestly life to missionary service in America.

When he arrived in Vermont in 1853, there were only eight churches throughout the state with five priests to minister to Catholics.

"Bishop deGoesbriand, even though he was raised in a well-respected and well-to-do household, lived in austere simplicity," said Kathleen Messier, assistant archivist for the diocese. "In several biographical accounts of Burlington's founding bishop, his Christ-like love of the poor and children has often been noted."

Though he had inherited from his parents about a quarter of a million dollars, by the time he died in 1899, he had spent his entire fortune; he had only $2.12 to his name and a few old suits, noted Fr. Lance Harlow, rector of St. Joseph Cathedral in Burlington who wrote a biography of the bishop in 2001.

DeGoesbriand spent his funds on purchasing church property, building churches, establishing and supporting an orphanage and helping the poor residents of Burlington as well as his priests who were struggling in poor parishes.

"Researching his life forever changed the direction of my priesthood in that the saintly qualities of his life have become a model for me how to live: to devote myself wholeheartedly to my diocese, to labor to promote the Catholic faith by writing and today by the internet; by teaching the history of great Catholics in the diocese, to use my financial resources for the poor; and to have a deep trust in the Blessed Virgin Mary and in his motto that 'God will provide,' " Harlow said.

There are no known miracles attributed to deGoesbriand, but his contemporaries had described him as "the saintly bishop."

In the 1930s, there had been discussion about pursuing his cause for canonization, but in a missionary diocese such as Vermont, "the needs of taking care of parishes precluded any serious investigation into his heroic life, so nobody ever pursued it," Harlow said.

Coyne was impressed with the sacrificial nature of deGoesbriand's life and wanted to pursue the cause for canonization.

DeGoesbriand's "life was lived in true service to the flock entrusted to his care," McDermott said.

Saints and persons on the road to canonization with a connection to Vermont include St. Andre Bessette and St. Marianne Cope who had or have family in Vermont; Br. Joseph Dutton, a Stowe native who cared for lepers on Molokai for whom the Diocese of Honolulu has opened the cause canonization; St. John Paul II who visited Pomfret while a cardinal; St. Isaac Jogues and other North American martyrs who are believed to have done missionary work in what is now the Green Mountain State; and Br. William Gagnon, who lived in Barton for several years with his family and has the title "venerable."

The first steps in a sainthood cause include compiling the candidate's writings, gathering sworn testimonies about his life and holiness. Documentation from the diocesan inquiry is sent to the Vatican Congregation for Saints' Causes, which reviews the gathered information. If the person is found to have led a heroic life of Christian virtues, the church bestows the title "venerable."

Urban is content editor/staff writer for Vermont Catholic magazine, official publication of the Diocese of Burlington.