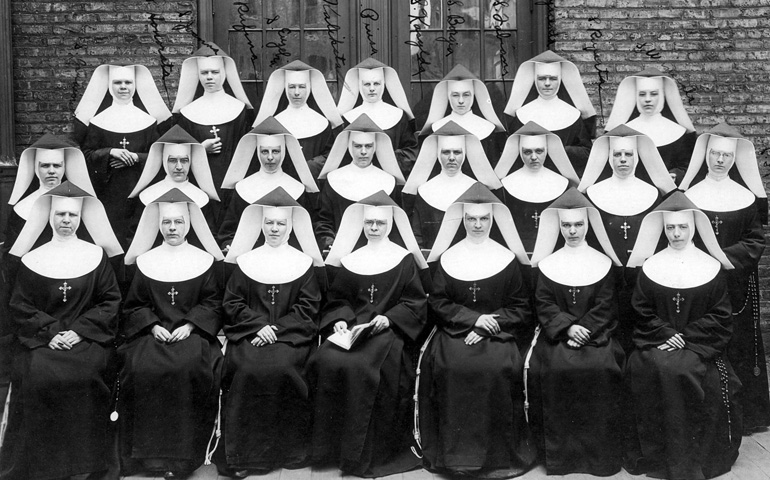 Nuns pose outside St. Mary of Perpetual Help School in Chicago in 1922. The image appears in a documentary titled "Women & Spirit: Catholic Sisters in America," airing on NBC as part of its "Horizons of the Spirit" series. (CNS/Courtesy Leadership Conference of Women Religious)

Sr. Ann Kendrick doesn't think of herself as a celebrity, but her role in the documentary "Women & Spirit: Catholic Sisters in America" may change that.

A Sister of Notre Dame de Namur, she and two other religious sisters arrived in Apopka more than 40 years ago to serve farmworkers and the working poor in the diocese of Orlando. Their empowerment and advocacy work at Hope CommUnity Center is featured in the program produced by the Leadership Conference of Women Religious and narrated by news analyst and author Cokie Roberts.

"Women & Spirit" is now available for broadcast by NBC affiliate stations nationwide as part of network's "Horizons of the Spirit" series in partnership with the Interfaith Broadcasting Commission. The window for local stations to air the film runs until March 15.

It is not a "must carry" program. Stations can decide when to air it or not, so viewers were being encouraged by LCWR and others involved with the project to contact their local NBC affiliate and urge the film be broadcast.

"Women & Spirit" chronicles the 300-year contribution of religious women in the United States. It shows their arrivals on immigrant ships, their nursing of Civil War soldiers and courageous care for epidemic victims. Through determination and sheer grit, they established hundreds of schools, one out of every five hospitals in the U.S. and 110 colleges, all at a time when women had less public freedom than they do now.

"The documentary made me so proud of our historical legacy," Kendrick said. "We're just one in thousands of examples of sisters doing quiet, amazing work, with no fanfare."

The documentary's project coordinator, Sr. Ellen Maher Garvey, a Sister of Charity of the Blessed Virgin Mary, said the project gathered enough material for "a thousand stories." The religious sister from Dubuque, Iowa, described "Women & Spirit" as having two phases. The first was a touring exhibit for which each U.S. community of sisters sent three or four artifacts for display. Sister Garvey said the final choices were "illustrative rather than exhaustive." Phase two is the DVD.

Sr. Mary Dacey, a Sister of St. Joseph from Philadelphia, said the documentary became "almost more important" than the exhibit.

"The DVD is a living, breathing thing," said Dacey, who was a member of the LCWR leadership and helped launch "Women & Spirit."

"It's not just about history. Though it reveals the richness, diversity and impact of the sisters, it doesn't stop there. The earlier sisters came with immigrants," she told The Florida Catholic, newspaper of the Orlando diocese. "Today we're into immigration in a new and bold way. This connects us with the prophetic stance of the church. It is so exciting and makes a difference for our lay brothers and sisters."

The documentary captures that prophetic stance, in part, by highlighting the immigration efforts of Kendrick and the Hope CommUnity Center, whose young people traveled to Washington to lobby for the DREAM Act and who are now gathering support to encourage Congress to pass an immigration bill.

When LCWR asked Roberts to write an endorsement for the traveling exhibit, she did so gladly. She also was the natural choice for narrator when Nancy Seruto and Tim Steinouer suggested the sisters make a video from the exhibit and offered their production services.

"The script left me amazed at the stories of these women, and this from a Sacred Heart girl," said Roberts, who was educated by the Sacred Heart Sisters and regards them as "very important people" in her life.

"We learn, from the age of 5, I think, about St. Rose Philippine Duchesne and the incredible obstacles she faced. It is so easy to say, 'She established the first free school west of the Mississippi,' and to say, 'Oh, yes.' But we have to ask, 'How does that happen?'

"There were treacherous ship voyages, arduous travel in heavy wool habits, incredible heat and bishops who changed their minds. These women were always fighting civil and church authorities to do what they were called to do."

Added Roberts, "Those of us who were educated by them need to support them. We ourselves may not be women religious but they helped us to become religious women."

Kendrick is happy that the documentary recognizes her work for justice, but she also is grateful for the way "Women & Spirit" portrays sisters in general.

"Sometimes sisters are trivialized by being portrayed as innocent little girls in an enclosed world or, on the other hand, as outspoken and harsh women. I was happy to show a different image," Kendrick said. "We step in and do what needs to be done. It is a path that may lead to controversy or conflict, but we are not seeking that.

"We are following our heart and what the Gospel is telling us to do."

Get more information on how to contact local stations. Information on ordering the DVD is available at womenandspirit.org/dvd.

[Carol Stanton is a correspondent for The Florida Catholic, newspaper of the diocese of Orlando, Fla.]