Was Christopher Columbus on a religious crusade? 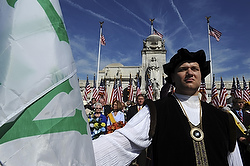 Jack Heretik of the Knights of Columbus portrays 15th-century Italian explorer Christopher Columbus during a Columbus Day observance Oct. 11, 2010, at Columbus Circle in Washington, D.C. The Knights mark the federal holiday with the ceremony in front of Washington's Union Station each year. (CNS photo/Jonathan Ernst, Reuters)

The books, released in the weeks leading up to Columbus Day (Oct. 10), claim the reason the famous navigators sought a direct trade route to India was to undermine Islam.

"I think historians have known about this, but they haven't taken it seriously," said Carol Delaney, author of "Columbus and the Quest for Jerusalem." Delaney, a retired anthropologist, is currently a research scholar at Brown University.

Delaney's book argues that Columbus wanted to find gold to finance a new crusade to recapture Jerusalem from the Muslims, believing that Jerusalem must be in Christian hands before Jesus' Second Coming.

"People don't usually look at Columbus in the religious context of his time, which was very powerful," said Delaney.

Nigel Cliff, the author of a new book on Columbus's Portuguese contemporary Vasco da Gama, agrees that seeing the explorers through a religious lens is "a change of emphasis." Historians in the 19th century tended to regard Columbus as a heroic figure who embarked on a "disinterested intellectual adventure," whereas those in the 20th century tended to "focus on economics, to the exclusion of much else," he said.

"Faith is the burning issue that impelled the great Portugal (exploration) campaign for 80 years," said Cliff, a British writer and amateur historian.

Da Gama became the first person to reach India directly from Europe by sailing around Africa in 1498, six years after Columbus discovered the Americas for the king and queen of Spain.

Cliff's book, "Holy War," claims that da Gama's arrival in the East marked a turning point from Muslim to Christian ascendancy in global trade against the backdrop of an ongoing "clash of civilizations."

But other historians say the new books' bold claims are backed by poor scholarship. Felipe Fernandez-Armesto, a historian at the University of Notre Dame who has written extensively on Columbus, harshly criticized the books in The Wall Street Journal.

In his view, Cliff and Delaney "assume the veracity and authenticity of sources of doubtful authorship and unreliable date" and make the mistake of taking Columbus at his word although he was notoriously disingenuous.

Sanjay Subrahmanyam, a historian at UCLA who has written on da Gama, said religion for da Gama was "significant, but not the sole motive." The explorer was more interested in "personal advancement," as well as ensuring that trade routes would be controlled by the Portuguese nobility rather than the crown.

Fernandez-Armesto called Cliff's theory of a "clash of civilizations" between Christianity and Islam "a figment of contemporary imaginations"; Subrahmanyam said it is "sensationalizing history by linking it with contemporary events."

According to Subrahmanyam, there is "no evidence whatsoever" that da Gama wanted to take back Jerusalem and prepare for Christ's return, although there is some evidence that Columbus may have had those ambitions.

For instance, Delaney points to the mysterious "Book of Prophecies," a gathering of mostly biblical pronouncements that seem to lend divine significance to Columbus's voyages. The book was supposedly compiled by Columbus himself.

Fernandez-Armesto also points out that the Spanish court that commissioned Columbus's voyages had long been obsessed with the idea of Jerusalem.

However, "there is no evidence that Columbus was particularly religious until ... he turned to God following the failure of his worldly ambitions," he said. Columbus died a disappointed man because he had not found the quantities of gold and the passage to India he had sought.

If nothing else, the debate surrounding the books illustrates that Columbus remains a controversial figure, more than 500 years after he sailed the ocean blue. "Everybody seems to have a vested interest in their version of Columbus," Delaney said.

The Knights of Columbus, the world's largest Catholic fraternal organization, are named after the explorer. Pat Korten, a spokesman for the Knights, said Columbus' piety was a "significant" reason for the group's name.

"The Knights of Columbus always regarded him as a fundamentally religious man—there isn't any doubt about that," Korten said.

The other factor was strong anti-Catholic sentiment when the Knights were founded in 1882. By connecting themselves with the popular figure of Columbus, Korten said, the Knights were sending the message, "We're just as American as you are—we got here first!"

Although Columbus's popularity fell during the 20th century, the Knights are "not ashamed" of their namesake, Korten said. He had never heard the theory that Columbus wanted to fund a crusade to take back Jerusalem.

If an erroneous theory is being propagated, Subrahmanyam blamed "commercial (publishing) presses" for not submitting their manuscripts to the same rigorous peer review and critique as academic publishers.

Fernandez-Armesto, meanwhile, blamed the authors themselves.

"If you are taking refuge from another discipline in the belief that history is easy, without bothering to do the basic work," he wrote, "you will deserve to fail."

Was Christopher Columbus on a religious crusade?