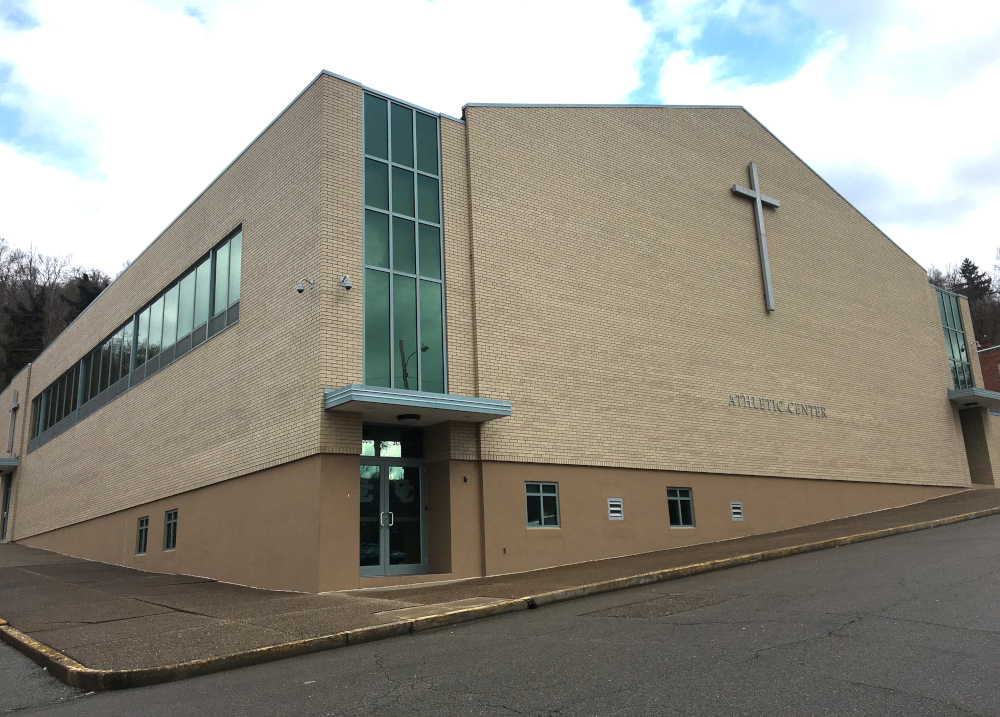 Former Diocese of Wheeling-Charleston Bishop Michael Bransfield's name has been removed from the gymnasium at Central Catholic High School in Wheeling, W.Va., a decision made by the school's board. The exterior of the gym is pictured Feb. 15, 2019. (CNS/Colleen Rowan/The Catholic Spirit)

Former Wheeling-Charleston Bishop Michael Bransfield's name has been removed from the gymnasium at Central Catholic High School in Wheeling.

School officials said the school board voted unanimously at its January meeting to recommend to the diocese, for its approval, that the name be removed to coincide with the recommendation that all buildings and facilities be named for saints.

Bryan Minor, delegate for administrative affairs for the Diocese of Wheeling-Charleston, said that the diocese's apostolic administrator, Archbishop William Lori of Baltimore, accepted the board's decision.

"Central Catholic High School approached the diocese and asked if it was possible to discuss changing the name of its gymnasium facility in Wheeling, which was named after Bishop Bransfield last spring," Minor said. "The archbishop responded by asking the CCHS school board to consider their options and provide a recommendation. The school president reported the decision of the school board to remove the name of Bishop Bransfield."

A written copy of the board's recommendation was submitted to Lori for consideration.

"He approved the name change and accepted their recommendation," Minor said.

Minor said during this period while the diocese is without a bishop, Lori has indicated that he would consider local input regarding names of facilities in the diocese, particularly those named after bishops.

Bransfield's name also was removed from the Continuous Care Center at Wheeling Hospital.

In December, the Diocese of Wheeling-Charleston announced that the former Bishop Hodges Pastoral Center in Huttonsville, West Virginia, would be renamed the Mary Help of Christians Pastoral Center.

Diocesan officials stated, at that time: "This new title better reflects the mission of the center as well as acknowledges where we are at this point in the history of the diocese. The new title correlates beautifully with the existing Camp Bosco, titled after St. John Bosco." That name change has taken place.

Minor told The Catholic Spirit, the diocesan newspaper, that many dioceses have considered policies that refrain from naming facilities after current or former bishops, priests or other individuals.

He also said that while the Diocese of Wheeling-Charleston has not formally adopted such a policy, Lori has encouraged that practice.