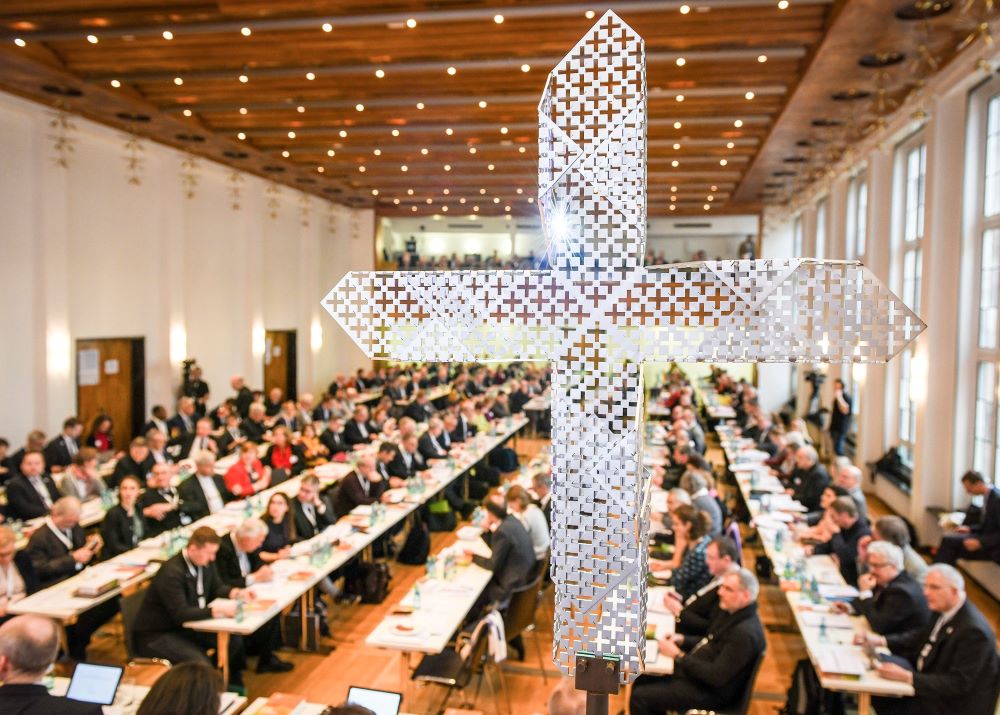 The second session of Germany's Synodal Assembly, delayed because of COVID-19, is scheduled for Sept. 30-Oct. 2. Participants are seen in this file photo at the Dominican monastery in Frankfurt, Germany, Jan. 31, 2020. (CNS/KNA/Harald Oppitz)

It strikes fear in the hearts of some conservative Catholics: Germany's Synodal Path reform project. Will it cause a schism in the Catholic Church? Is Germany abolishing celibacy against the will of the Vatican? As a German observer, I wish to try and answer the questions some Americans don't seem — or don't want — to understand about the path before the next Synodal Assembly Sept. 30 to Oct. 2.

What is the Synodal Path?

It would be easier to define what it isn't. It is neither a synod nor a particular council. Even though it was established unanimously by the German bishops' conference, it cannot and will not provide binding resolutions, neither on Catholic teaching for Germany (as some fear) nor on anything at all, as every decision must be ratified by each bishop for his own diocese. So first of all: Nothing can nor will be decided against the will of the local bishop.

The Synodal Path is fundamentally linked to Germany's abuse scandal. In autumn 2018, the German bishops published a scientific study citing 3,677 singular cases of sexual abuse of minors in Catholic institutions. You can't overstate the blow this delivered to the German church. Even though the scandal itself was first uncovered nearly 10 years earlier, people had no idea of its magnitude. Nearly 5% of all priests in Germany were accused of being perpetrators. Trust in the church has been in free fall since then, as has the number of people wanting to be associated with the institution.

How did the Germans react to the abuse scandal?

This devastating blow had several different kinds of reactions: denial from some conservative circles, doubt over the findings, shock from people within the church and determination to change. But how do you change a system with such a fundamental problem, especially if aspects of its structure couldn't be changed on a national level?

The bishops, together with Germany's powerful lay committee "ZdK," (the German acronym for Central Committee of German Catholics) decided to take a democratic approach. A new governing body, consisting of all German bishops and the same number of lay representatives, was created for two years (at first) to ask the most fundamental questions: Does celibacy lead to abuse? Would a church with female ordination experience the same problem? All those questions were set to be discussed. If they were decided on, that would be another matter.

Why did the bishops take part in a process that could restrain their own power?

That is a valid question. At this moment, almost two years into the process, there is a lot of backlash coming from the Catholic right in Germany and abroad, but also within the more conservative circles in the bishops' conference. Most doubts come from Bavaria and Cologne. Both regions have traditionally been among Germany's most Catholic, with the rest of the country split 50/50 between Catholics and Protestants.

So why did those conservative bishops agree on this process in the first place? As I said, it was agreed on unanimously. Once again, the shock of the abuse crisis was so fundamental that no bishop wanted to stand in the way of an appropriate reaction. But also, the decision to take up this project was made quite quickly. It was only months after the publication of the abuse study that the Synodal Path was born.

But conservative bishops are not the only doubters. Doesn't Pope Francis have a problem with the German approach as well?

Apparently so, but it seems for different reasons than the conservatives. For a long time, there were rumors of the pope speaking ill of the process behind closed doors.

In the summer of 2019, when the process was announced but not yet started, Francis wrote an unprecedented letter "to the people of God in Germany." In this lengthy document, he congratulated the church in Germany on its brave path but also reminded them that the Gospel of Jesus Christ had to be the center of the process.

Was this an encouragement to change? Or a threat not to? Different parties came to different conclusions.

In the summer of 2020, though, during one of the pope's general audiences, he was clearer. Francis said he feels a "great sadness" when he sees the church acting "as if it were a political party: the majority, the minority, what this one thinks of this or that or the other, [saying], 'This is like a synod, a synodal path that we must take.' "

Though some pointed out that Francis didn't explicitly mention Germany, it seemed clear what he meant. He thinks every reform process in the church must be spiritual, not political, with one side fighting the other.

In a way, though, this is exactly what is happening with Germany's Synodal Path. There are two factions, the larger liberal faction, and the smaller conservative faction, who both have a clear idea of what needs to change.

Francis had similar criticism after the synod on the Amazon region in 2019. He didn't implement some of the more progressive ideas because he thought the process turned into a political parliament with each side trying to convince the other and not listening to them. Apparently, the pope believes the same about the process in Germany, and I don't think he is wrong there.

As in any democratic process, there are outliers to the left and the right.

So, will Germany actually abolish celibacy and ordain women priests?

No, of course not. And nobody who follows the process thinks that. On one hand, they can't. Even the Vatican wrote them, noting that none of the Germans' decisions would be binding for Rome or anyone else. On the other hand, not even the progressive bishops in Germany would expect any such resolution.

There are, however, delegates who raise these points and demand decisions on those matters. Some say Germany must lead the way to a progressive church — and do it on its own if it comes to the worst. Nevertheless, for the most part, these are not the opinions that will garner a majority. As in any democratic process, there are outliers to the left and the right. When delegates from a youth organization, for example, demand female ordination, they have the right to do so, but that doesn't mean anything like that will find a majority.

What are the actual ideas being discussed?

If you look at most of the speeches and statements (which are documented in English on the homepage of the organizing committee), it is more about a change in mentality than dogma: more respect for LGBTQ-Catholics in a pastoral sense, more inclusivity for priests in everyday parish life, more focus on sexual education in the seminaries. One idea raised in the first plenum in January 2020 in Frankfurt I found particularly interesting: A priest should live with roommates, ordinary people from the parish. Less isolation and more interaction with other ways of life might be a big step in fighting structures of clericalism, which seem to be one of the root problems of the abuse crisis.

So why does the Catholic world not see this? It doesn't seem like Germany wants to abolish Catholic teaching after all.

As always, the most extreme positions garner the most attention. Priests with roommates and modern sex education won't make headlines. However, when some people demand fundamental changes to Catholic teaching, it will. The language barrier also plays a significant role here. The organizers try to get their message and the facts across in English as well (the German Catholic News Agency KNA even established an English service solely for this occasion).

Still, those don't seem to penetrate the larger conversation. What does are the fears of people from the right, who bring their view abroad, but not the whole picture. People in the Vatican tell me this as well. Everybody has their sources and connections and mostly hears what those — the ones afraid — want them to hear. So these fears of the "synodal path" penetrate Rome as well.

Will the Germans change their church in any way?

To be honest, I'm pessimistic here. A lot of effort and money has been poured into the project. But — as Francis apparently feared — the factions have their rock-solid opinions. I don't think any substantial change will garner the needed majorities in the plenum. Anything they will be able to agree on will be a compromise that will sound soothing to everyone involved but won't change anything in the long run.

This is partly to blame on the pandemic as well. The full plenum gathered in person only once so far, in January 2020. Every discussion or larger work meeting after that has been held digitally. As we're all painfully aware after almost two years: Zoom, Skype or Teams aren't the tools for nuanced, sensible discussions.

The process will now run longer than the planned two years. Still, I don't think they will come together to find a consensus that will be able to get to the root of the problem — to find a solution for the abuse crisis.