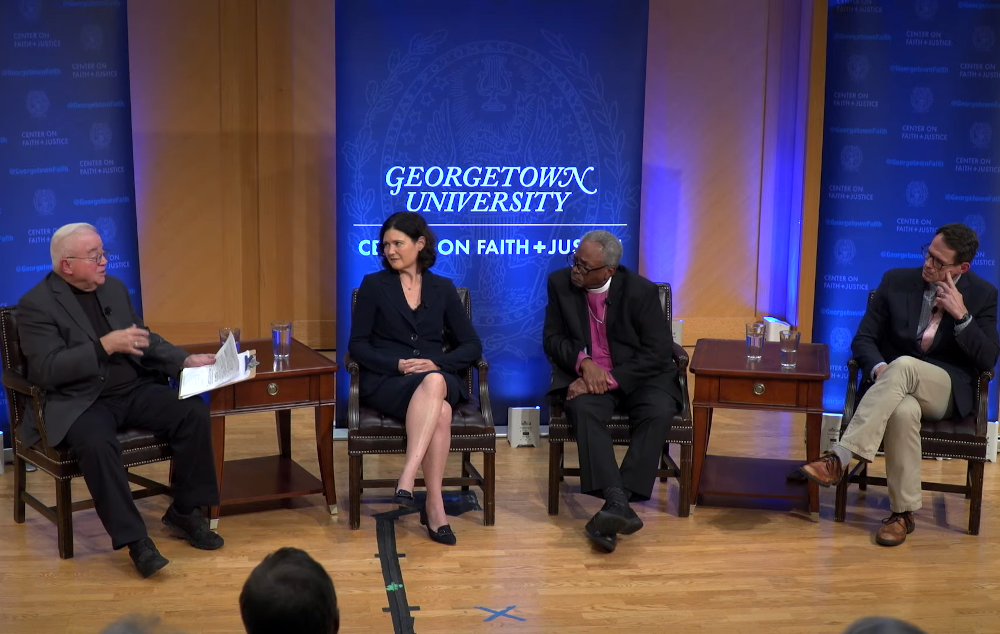 The Rev. Jim Wallis asks speakers Amanda Tyler, executive director of the Baptist Joint Committee for Religious Liberty, the Rev. Michael Curry, presiding bishop of the Episcopal Church, and Samuel Perry, associate professor of sociology at the University of Oklahoma a question at "How White Christian Nationalism Threatens Our Democracy" on Oct. 26. (NCR screenshot)

Three Catholic institutions have wrestled with the influence of white Christian nationalism and white supremacy on the church and national U.S. politics in webinars in recent weeks.

On Oct. 26, Georgetown University's Center on Faith and Justice co-hosted an event with the Baptist Joint Committee for Religious Liberty titled, "How White Christian Nationalism Threatens our Democracy." The Rev. Jim Wallis, the former editor of Sojourners magazine and director of the center, moderated a panel of experts and religious leaders.

Network, the Catholic social justice lobby, and the National Black Sisters' Conference also co-hosted "White Supremacy and American Christianity," a webinar moderated by Joan Neal, deputy executive director and chief equity officer at Network, on Oct. 29. The webinar was a follow-up to a half-day conference on the same topic that was held in April.

Fr. Bryan Massingale, who spoke at the Oct. 29 webinar, connected the tour to the recent attack on House Speaker Nancy Pelosi's husband, Paul. A speaker at a ReAwaken America tour stop in Pennsylvania on Oct. 21 declared that "the angel of death is coming to visit these people" while standing before images of journalists and Democratic politicians. 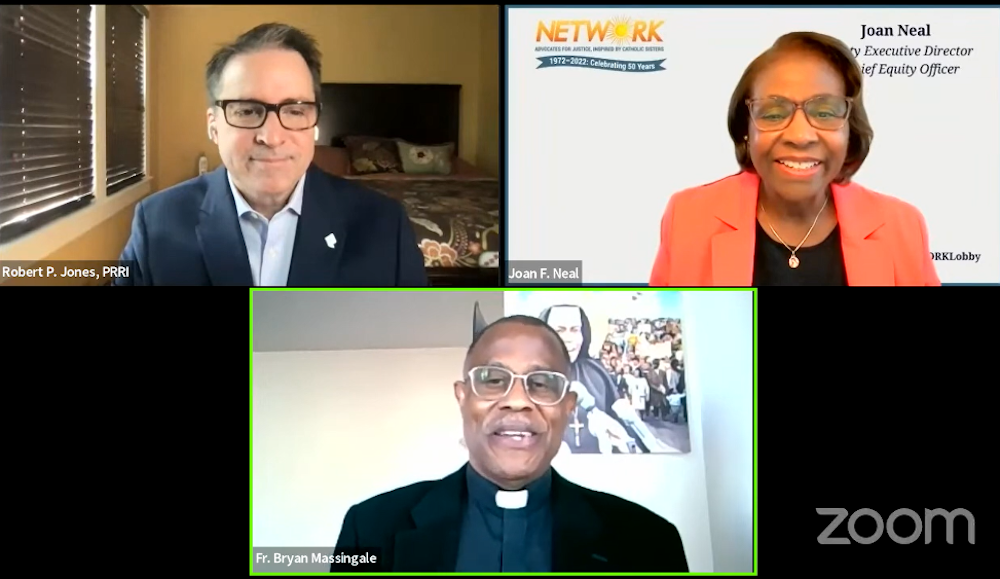 Massingale expressed disappointment about "the failure of major leaders to be forthright about the threat that this ideology poses, not only to our democratic process, but how it is fundamentally anti-Christian and idolatrous." The priest said that Los Angeles Archbishop José Gomez, president of the U.S. bishops' conference, and San Francisco Archbishop Salvatore Cordileone, the Pelosis' bishop, did not connect extremism and white Christian nationalism in their statements about the attack.

More broadly, Massingale said he saw this failure of leadership in the omission of the words "white supremacy" from the bishops' 2018 pastoral letter on racism, titled "Open Wide Our Hearts: The Enduring Call to Love." He said the document often uses passive voice, failing to name who is responsible for racial injustice.

At Georgetown on Oct. 26, Amanda Tyler, executive director of the Baptist Joint Committee for Religious Liberty and lead organizer of Christians Against Christian Nationalism, said that her group has asked the House Select Committee on the January 6 Attack to study the impact that white Christian nationalism had in the organizing of the Capitol insurrection.

Speaking with Massingale and Neal at the Network event, Robert Jones, president and founder of the Public Religion Research Institute, referenced his organization's recent American Values Survey, which found that 36% of white Catholics and 50% of white evangelical Protestants agreed with the statement, "God intended America to be a new promised land where European Christians could create a society that could be an example to the rest of the world."

Jones said that people who believed this statement are more likely to believe that political violence is justified, that the 2020 election was stolen, and that nonwhite immigrants are being brought to the U.S. to "replace" white voters.

Jones told Neal that the nation has arrived at this point because of past failures to "purge white supremacy from our ranks."

Speaking about white Christians, Jones said, "There have always been enough of us in American history that if we had stood up shoulder-to-shoulder at any time and said no to slavery and said no to segregation and had said to no to the kind of violence and antisemitism and bigotry that we're seeing today, we could end it overnight."