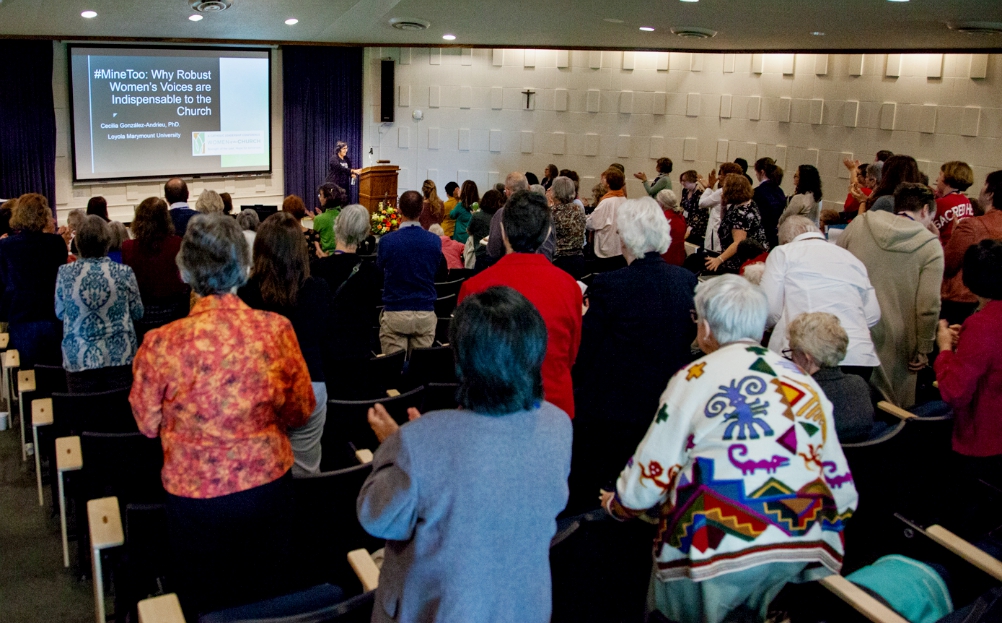 Catholic women in the United States gathered to urge greater leadership roles for women in the church, even as bishops were discussing the possibility of women deacons at a synod in Rome.

Organizers of the second Women of the Church conference could not have known that the diaconate for women, as well as the possibility of ordaining some married men, would be making headlines from the Synod on the Amazon at the same time they were meeting, Oct. 18-20, at St. Mary's College here.

The women's gathering, which attracted more than 150 women and men from all over the country (as well as from Italy and Germany), inspired attendees and offered hope while also providing a space to mourn current and past exclusion of women.

The first conference, held in 2016, was organized by a group of faculty at St. Meinrad Seminary in partnership with the Sisters of St. Benedict of Ferdinand, Indiana. Since then, the church has faced a resurgence of the clergy sexual abuse scandal that is zeroing in on bishops.

Theologian Cecilia González-Andrieu, a Californian, compared the current chaos and destruction in the church to the devastating wildfires in her state, calling it a "painful moment" of taking stock of "so much that is no longer standing," yet also "a sobering opportunity to remember who we are and reclaim the splendor of vulnerable love." 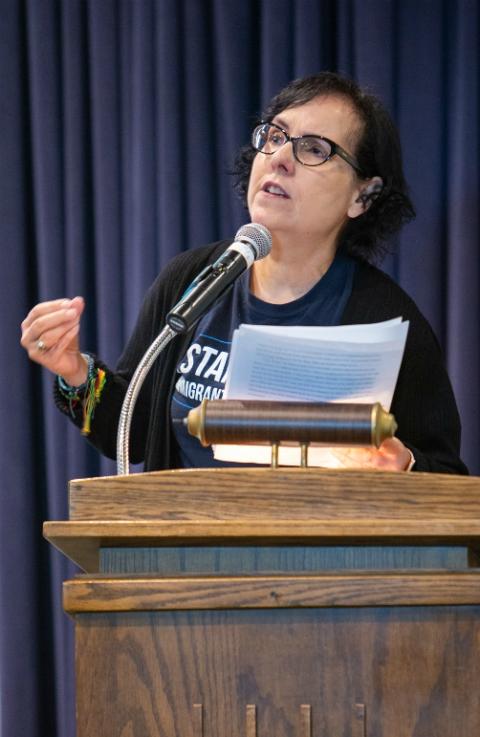 Women — aligned with the poor, indigenous and marginalized "who have much to teach us" — are the key to the church's resiliency, said González-Andrieu, associate professor of theology at Loyola Marymount University in Los Angeles.

"Ours is the unexpectedly clear-eyed perspective from the forest floor or from the top branches of trees," she said, comparing the need for "an eruption of women into history" to the current response that "does not sufficiently address structures and practices" that created the crisis.

"Lacking access to power, are we able to see more clearly?" González-Andrieu asked. "Is our vocation to follow the way that Jesus taught more closely aligned with him than all the male, clerical structures that have built up power over the centuries? Are we constitutive parts of the ecosystem of the Jewish and Christian forest that can lovingly restore it to love of God and love of neighbor?"

González-Andrieu criticized the "church triumphant and militant" approach. "Christianity is not a religion of perfection, harmony, symmetry or triumph," she said. "No, Christianity is the messy story of unrelenting love and generosity that is not destroyed by evil precisely because we have been reminded again and again of our vulnerability and have chosen to intentionally inhabit our brokenness."

Drawing on her Latina heritage, González-Andrieu presented a plan for women in the church today that included claiming power as a verb, as in the Spanish poder, which means to act or push through.

In the end, women must ask "toward what?" are they pushing, González-Andrieu said. "The purpose of the church is not to perpetuate itself as an institution," she said, but rather is about the reign of God.

A number of sessions addressed the sex abuse scandal. In her closing remarks to the conference, keynote speaker Kerry Robinson reminded the attendees that "difficult never means impossible" and encouraged them to remember what they love about the church. 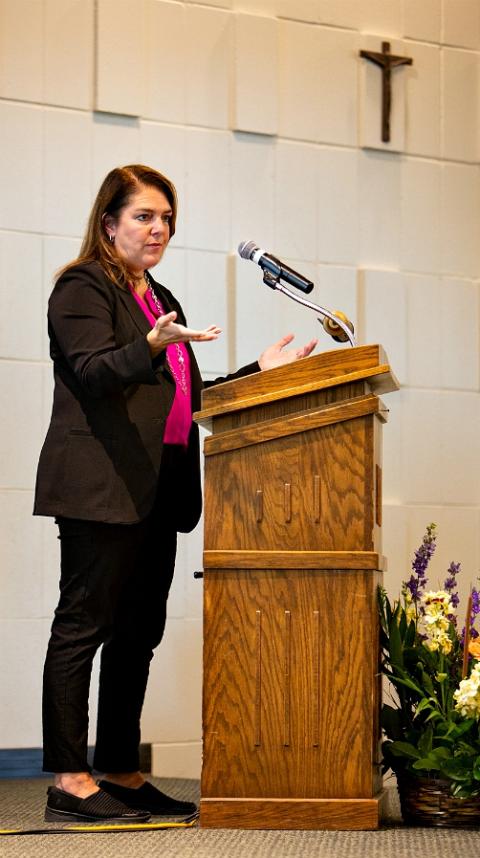 "These are not easy days to be Catholics. These are not easy years to be Catholic, as we confront the crisis of clergy sexual abuse and fractured trust, replete with clericalism, sexism and poor stewardship," said Robinson, who is global ambassador for Leadership Roundtable, an organization created in 2006 in response to the sex abuse crisis to promote accountability and best managerial practices in the church

The exodus of young women from the church was also a frequently mentioned concern. Robinson said their absence impoverishes the church and is a matter of "managerial and moral urgency."

"How dare we risk losing them?" she said.

As part of a group that met with cardinals from around the world, Robinson describe how young Western women find nearly unlimited possibilities in the secular world. "But when that same woman discerns a vocation of service to the church she loves, she is more often met with limitations on her leadership."

As talented, competent women move away from the church, so do their children, both boys and girls, Robinson said.

But the women's conference attracted quite a few younger Catholics, including several undergraduate and graduate students from St. Mary's and the University of Notre Dame.

St. Mary's senior Sophia McDevitt, who is majoring in social work and religious studies, said some of her friends don't understand why she is still part of the church. At the conference, she met theologians she has read in class and learned about the variety of ways attendees practice leadership in the church.

"To see all these intelligent, confident, strong women who are still part of the church was rejuvenating," she told NCR. "And to be able to see women leaders talk about how to confront change and navigate these spaces is really powerful."

Jane Cruthirds, who teaches at Sacred Heart Academy, all-girls school in Louisville, Kentucky, also was excited to introduce her students to the work of the women she met at the conference. Her high-schoolers are looking for spiritual practices that "meet them where they are," an institutional church that listens to their needs, and opportunities to participate in leadership in the church.

"As I go back into the classroom this week, I can share with my students with absolute certainty that women are playing an active and important role in building God's kingdom while nurturing change in the church," she said.

While the conference aimed to include a relatively broad diversity of perspectives (including one panelist who identified herself as "center right"), not all were allowed to participate officially in the event. The Women's Ordination Conference, which advocates for the opening of ordination to the diaconate and priesthood to women, was not allowed to be an exhibitor, although a Women's Ordination Conference staff person attended the gathering.

"Our uncompromising mission for women's full equality is still a lightning rod in the Catholic Church, and unfortunately, even among gatherings working to create greater spaces for women, the taboo of ordination is perpetuated," Women's Ordination Conference executive director Kate McElwee told NCR. "It is painful, and a reminder of the urgency of our work."

Women of the Church organizer Arlene Montevecchio pointed to a workshop by Dominican Sr. Donna Ciangio, chancellor of the Newark Archdiocese, which looked at the role of women deacons in the early church and in the Eastern Church.

"St. Mary's tried to be inclusive in recruiting participants, speakers and vendors to be present at the conference," said Montevecchio, director of the college's Center for Spirituality. "We also provided classroom space for meetings of groups, dialogue or reflection on topics not covered in the formal sessions of the conference."

In addition to St. Mary's, other lead sponsors of the conference included the Loyola Foundation, the Sisters of the Holy Cross, the McGrath Institute for Church Life at the University of Notre Dame, and Catholic Theological Union.

Some attendees said they felt a "tension," but that it wasn't the typical left-right or liberal-conservative one.

Casey Stanton, director of adult faith formation at Immaculate Conception Parish in Durham, North Carolina, described it as between "women who have been able to respond to whatever they feel called to do in and for the church" and "those who feel called and gifted and there isn't a path for them."

Stanton observed both perspectives as represented at the event, specifically mentioning a workshop by a parent of a transgender child.

"I felt like I wasn't on the outside of the church looking in, but was with people who are leading and serving the institution," she said. "It just spoke to how women can stay and be faithful but also be bold."

[Heidi Schlumpf is NCR national correspondent. Her email address is hschlumpf@ncronline.org. Follow her on Twitter @HeidiSchlumpf. She was a workshop presenter at the Women of the Church event.]

Read this next: How far we've come: Women of the church, a conference and calling