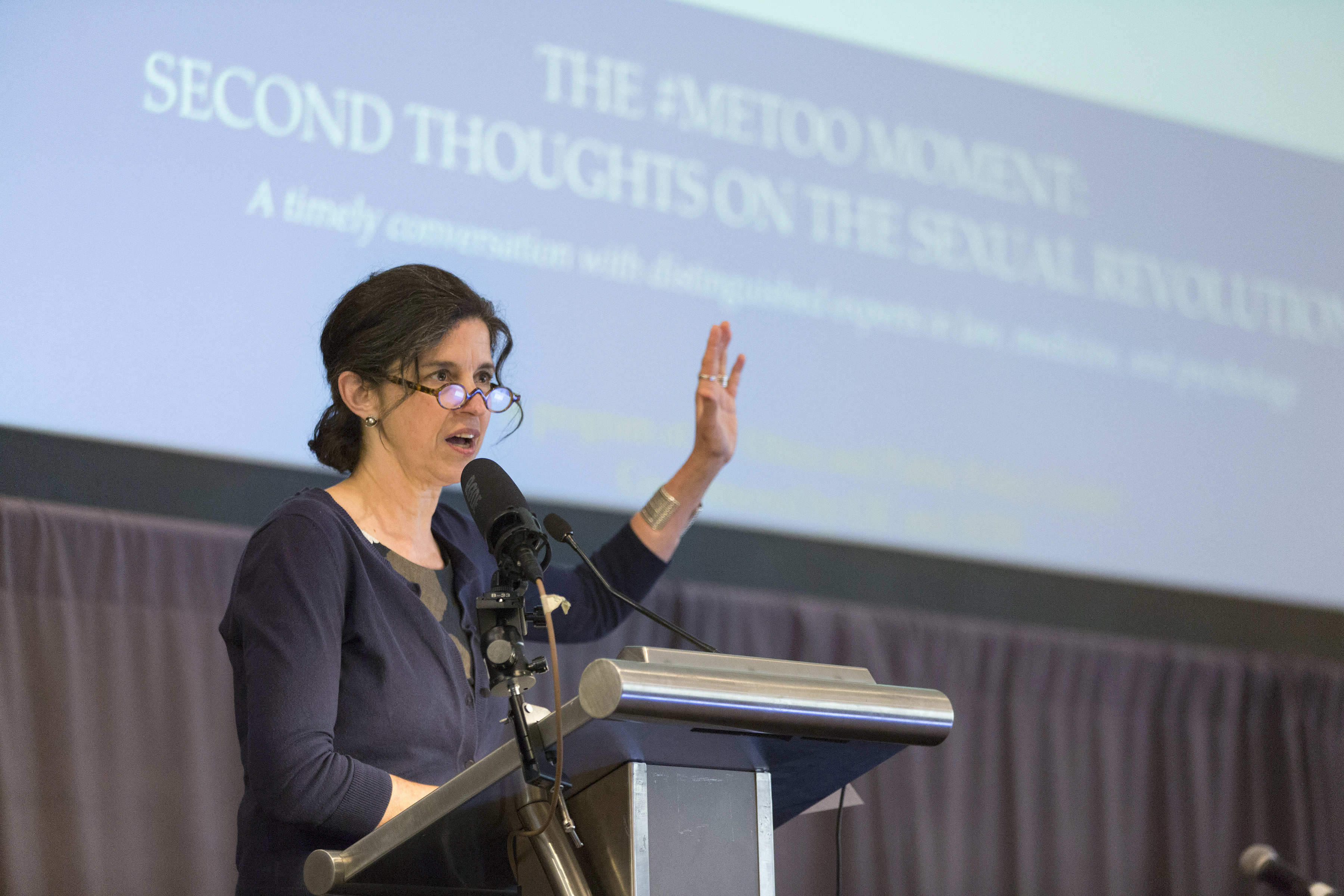 Mary Rice Hasson, director of the Catholic Women's Forum and fellow at the Ethics and Public Policy Center, said at a May 31 conference that "it's no secret that for many months the #MeToo movement has sparked widespread outrage over sexual harassment and a culture that condoned and excused it."

She made her remarks at the "#MeToo Moment: Second Thoughts on the Sexual Revolution" conference sponsored by the Catholic Women's Forum and the Notre Dame Center for Ethics and Culture. The event's co-sponsors were the Catholic Information Center, the Ethics and Public Policy Center and the Archdiocese of Washington's Department of Life Issues.

The event brought together panels of experts from the fields of education, faith, law, medicine and the social sciences. Drawing on the papal encyclical "Humanae Vitae" and on past and current events, panelists offered their "second thoughts" on the consequences of the sexual revolution as manifested in #MeToo movement.

"Importantly for us here today, it has created space for us to consider some of those questions and whether these harms might share a common root in the sexual revolution," Hasson said. "We step into that space today to begin that larger conversation."

Washington Cardinal Donald Wuerl, the conference's keynote speaker, spoke about the shift in values caused by the sexual revolution. He noted the widespread acceptance of secularism, the diminishing of and dismissal of Catholic teaching, especially with regard to sexuality, and the re-evaluation of the effects of sexual activity.

The cardinal pointed out that "we live in this heavily secular world in which the reference point does not include a transcendent point," he said.

He also noted that "beginning in the '60s, beginning with the so-called sexual revolution, was this increasing acceptability of dissent from papal magisterium."

Wuerl said that a "healing process" to counter this would include not just repeating the same language many people do not understand, but through engagement, encounter and accompaniment, drawing people back to the unchanged truths of the Catholic faith as passed on through the magisterium.

"You and I in all our efforts to address the second thoughts of the sexual revolution, need to keep one hand on that (Petrine) rock," Wuerl concluded.

Mary Eberstadt, author and senior fellow at the Faith and Reason Institute, examined the sociological, psychological and medical evidence of the revolution's fallout. She said her hope was that the conference would be "a flagship" of that examination.

She touched on various truths of the #MeToo movement "that expose the shifted cultural plates of the last half century, and the way in which this shift has changed our families, workplaces, romances and lack thereof, politics and culture."

These truths included how private acts have massive public effects seen in the loneliness epidemic, the harms of pornography and the preying of the strong on the weak. Quoting Russian author Leo Tolstoy, Eberstadt said, "'we cannot pretend we don't know these things.'"

The time has come, Eberstadt said, for "a deeper understanding of what a real pro-woman agenda might look like. The time for magical thinking about the revolution is over."  She said that a "wider rethinking begins with understanding things we now know, and the fact we can no longer pretend to un-know them."

At the conference, a panel of female doctors discussed evidence and concerns about the sexual revolution from the standpoint of women's health.

They were: Dr. Monique Chireau, assistant professor of obstetrics and gynecology at Duke University Medical Center; Dr. Marguerite Duane, executive director of Fertility Appreciation Collaborative to Teach the Science, known as FACTS, and adjunct associate professor at Georgetown University; and Dr. Suzanne Hollman, dean and program chair in clinical psychology and assistant professor at the Institute for the Psychological Sciences at Divine Mercy University.

The doctors spoke about the increases in sexually transmitted diseases and other health risks the pill promised to solve, the beauty and effectiveness of fertility-awareness-based methods, and the psychological and emotional trauma of the "hook-up" culture and abortion, especially on women.

"The pill really was the fuel for the sexual revolution," Duane said. She noted how the conference was taking place on World No Tobacco Day, observed every May 31. She said the estrogen-progesterone birth control combination — just like tobacco — is a group 1 carcinogen.

"I wonder if we'll have a No Pill Day soon," Duane mused.

Another panel spoke to how the exploitation of women through surrogacy, human trafficking, prostitution, and pornography is growing in our culture today because of the money behind the industries.

Jennifer Lahl of the Center for Bioethics and Culture, spoke on exploitation of women through the fertility industry of surrogacy, egg freezing, in vitro fertilization and more, which has "divorced sex from procreation."

"Children are made and not begotten," Lahl said. "We ought to think about limits to what we can and cannot do to our future progeny."

In her lecture about prostitution and human trafficking, Mary Leary of the Columbus School of Law at The Catholic University of America quoted a sex-trafficking survivor: "'Prostitution is #MeToo on steroids.'"

Leary said sex trafficking and prostitution is a $40 million industry in D.C. alone, and pointed out that in the exploitative elements of the sexual revolution, women are seen as one-dimensional objects — commodities — to be bought and sold in this "modern-day slavery."

"We're regressing to a time in our history where (it was) socially acceptable that people can be bought and sold in a public space," Leary said. "If you're an object, you don't have a dimension at all, and can be cast away without any concern."

Helen Alvare of the Scalia Law School at George Mason University concluded the conference by speaking about the power of women's voices in this arena.

"It really did take some decades to have this many qualified women" who lived through the sexual revolution, Alvare said. "We could not have had such a conference 30 years ago." She said she hopes this conversation will begin "an honest dialogue based on well-sourced facts had by honest women."

Vinton Restuccia writes for the Catholic Standard, newspaper of the Archdiocese of Washington.