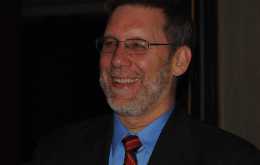 Dallas
What American women’s religious communities are experiencing today have implications for all Catholics. Similarly, how the women respond have important implications, perhaps even offering a vision of how to go forward as a church comprised of members with varied ministries.

Richard Gaillardetz, Murray/Bacik Professor of Catholic Studies at the University of Toledo, Aug. 12 offered these messages to some 750 U.S. women religious leaders gathered here under the auspices of the Leadership Conference of Women Religious (LCWR), which represents 95 percent of all U.S. women religious communities.

Drawing on his theological background and basing his talk on lessons learned by studying the Second Vatican Council (1962-65), Gaillardetz said he was appearing before the women not to recommend concrete responses to recent Vatican interventions into the LCWR organization and women’s communities, but rather to guide them to act with “creative fidelity,” a hallmark, he said, that has characterized professed religious life in the U.S. over the least five decades.

LCWR is meeting here under the dark cloud of a Vatican doctrinal inquiry into the organization; meanwhile, the Vatican is also conducting a three-year investigation of the quality of life in U.S. women religious communities. Officially, this investigation, called an Apostolic Visitation, implies that in the Vatican’s eyes something is amiss in the life of these communities.

Said Gaillardetz to the women: “The people of God are watching you, looking for a way forward in their own ecclesial difficulties. As I am sure you know, you are not the only ones experiencing the pain of ecclesial tensions. There are other faithful Catholics who struggle with abuses in ecclesiastical authority on many fronts. They know well of certain bishops who chose the protection of abusing priests over the protection of victims. They see young clerics who emerge from the seminary more preoccupied with their own ontological uniqueness, clerical garb and proper title than with the genuine pastoral needs of God’s people. They suffer under an enforced Eucharistic fast necessitated by a decision to place the weight of longstanding practice above the sacramental needs of the people of God. They find themselves ashamed when one of their most precious convictions, the dignity of all human life from conception to natural death, is effaced by church actions that suggest that the rights of the unborn eclipse the rights of the already born.”

The theologian continued: “Many of us in the church are doing today what we have done for so long, looking for you to show us a way forward. We are looking for you to model what authentic discipleship looks like in the face of ecclesial conflict. As catechetical leaders are wont to say, this is a teachable moment.”

He told the women they are being called to venture forth on what he described as an “ecclesial tightrope with no net” beneath them. “Veer too far toward the assertion of your proper autonomy and you fall into the abyss of sectarian self-righteousness. Veer too far in the direction of a pseudo-docility and unthinking obedience, and you fall yet again, this time into the abyss of ecclesial impotence and irrelevance.”

He went on: “We cannot say that we are on the tightrope with you, for that would trivialize the real risks and difficult choices you face. But we are praying for you, exercising that most ancient practice of Christian solidarity. And you need to know, in these trying times, that we are confident that you have the unique resources to show us a way forward that is humble, open to correction, yet confident in the gifts you have received.”

Gaillardetz said it is understandable that ecclesial tensions rise up naturally among church members who play different roles within the church.

However, he noted that “in the current situation it is getting very difficult to avoid the impression that we are now veering dangerously close to an instance of ecclesial dysfunction. If this is the case, then it suggests that the ecclesial tensions you are experiencing in the present moment may have a significance that goes well beyond your own circumstances.

“The increasingly dysfunctional character of the current tensions,” he said, “appears more likely to be the result of a failure (by the bishops) to recognize the distinct and complementary role of professed religious life within the life of the church.”

Vatican II taught that professed religious do not belong to the church hierarchy, he said. “This means that the unique contributions of professed religious cannot be subsumed under the magisterium’s own responsibility to make fidelity to the apostolic heritage its singular concern.”

He added that if Catholics believe in the unity of our faith affected by the power of the Holy Spirit, then they must believe that there is a place in which “the doctrinal teaching of the bishops and the dirt-stained testimony of those who experience God’s grace on inner-city streets, in prisons, hospitals and immigration advocacy centers, can meet.”

Offering guidance, Gaillardetz drew upon what he said are six elements of the Vatican council’s emerging ecclesiological vision.

1. The priority of baptism which replaces a pre-conciliar “hierocratic view of the church.” “Baptism called Christians to their most basic and primal identity within the life of the church, more basic than any identity conferred by either ordination or public consecration.” The council, he said, described the church as a society of equals. “In a church in which many of our leaders are still addressed as ‘your Holiness,’ ‘your Eminence,’ ‘your Grace’ and ‘your Excellency,’ we can be forgiven for wondering whether anyone is taking this teaching seriously!”

2. A view of the church constituted by the Holy Spirit and built up by gifts “both hierarchic and charismatic.” This “theology of charism,” he said, provides the basis for a new understanding of apostolic religious communities. “Professed religious life is not an auxiliary to hierarchical office but rather participates in a charismatic ecclesial economy.” He explained that in this view “the bishops are to be shepherds and custodians of the apostolic faith, but their office exists not for its own sake but in service of the church’s mission.”

3. The sense of the faithful, which holds that Word of God is addressed not just to the hierarchy, but to the whole church. The theologian explained that once Catholics believed that revelation was channeled exclusively through the magisterium; now the council taught that the Word of God is addressed to the whole church. Although the bishops play a unique role as custodians of the apostolic faith, the entire church is called to listen to God’s Word.

4. Conciliar humility in which the church was called to collaborate with all humanity. “The church guards the heritage of God’s word and draws from it moral and religious principles without always having at hand the solution to particular problems.”

5. An eschatological vision of the church always needing reform. Said Gaillardetz: “Vatican II taught that the church, although accompanied by the Holy Spirit, is nevertheless a human institution which is far from perfect. Indeed the council admitted that the church will achieve its perfection ‘only in the glory of heaven.’ The church is a pilgrim community that, like all pilgrims, has a sense of where it is headed but has not yet arrived.”

6. The church as missionary in nature, meaning, Gaillardetz said, that it is not of ultimate importance - its mission is. The council, he said, “oriented the church toward service of God’s reign in the world.

Keeping these conciliar teachings in mind, Gaillardetz said, might make it easier for the assembled women - and by implication, the wider church - to discern the path forward.

He finished his address by talking about the dispute that arose between women religious groups and the U.S. bishops over health care legislation last May. According to Gaillardetz, much was made of the differing judgments regarding the final form of the legislation.

“What is remarkable to me is that so little has been made of the overwhelming agreement between the Catholic supporters of the legislation and the position of the bishops on every significant moral issue.” The disagreement, he said, was limited to different interpretations of “exceedingly technical policy jargon.” The tensions that followed, he said, were a direct consequence “of an inability to appreciate the diverse roles played by the various advocates of the Catholic moral vision,” and of the differing competencies of those who pronounced judgment on the legislation.