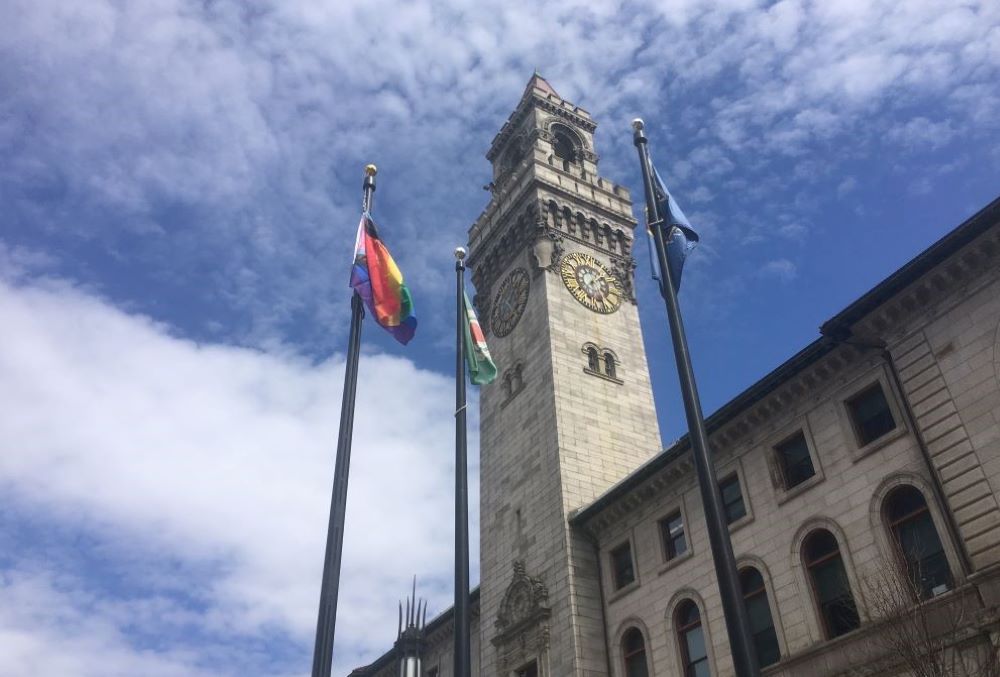 For more than a year, Nativity School of Worcester has flown flags representing the Black Lives Matter and gay pride movements to show that all are welcome at the Jesuit-run boys middle school in central Massachusetts.

But the school's gesture of solidarity with the Black and LGBTQ communities has recently elicited the disapproval of Bishop Robert McManus, a prelate who has been outspoken against issues about gay and trans rights.

Accusing the school of flying symbols that contradict church teachings, McManus has asked that the school remove the flags or risk losing the right to call itself a Catholic school, a spokesman for the Diocese of Worcester told NCR. For now, those flags still fly as many in the local community rally around Nativity and school and diocesan officials discuss the issue.

"It just begs the question, 'Why now?' Why is it that such a threat would be placed on an institution that is doing no harm whatsoever, and has been only beneficial to the community at large?" said Guillermo Creamer Jr., a member of the Worcester Human Rights Commission.

'At Nativity we're taught to be men that will serve all individuals, and that includes members of the LGBTQ community and the Black community.'
— Guillermo Creamer Jr.

Creamer, who graduated from Nativity School of Worcester in 2008 and is gay, told NCR that the bishop's criticisms of his alma mater is "something very personal" for him. Creamer credited his Nativity education with changing his life and making it possible for him to create his own nonprofit that lobbies for interns to be paid.

"I think Nativity does a really good job in ensuring that all their students, regardless of where they come from or what their family makeup is like, feels represented," he said. "At Nativity we're taught to be men that will serve all individuals, and that includes members of the LGBTQ community and the Black community."

Officials from Nativity and the Diocese of Worcester declined NCR's interview requests, citing ongoing discussions between the school and McManus. In prepared statements, both sides explained their positions.

The school said the flags fly "to remind our young men, their families and Nativity Worcester staff that all are welcome here and that they are valued and safe in this place." Flying the flags, school officials said, tells students, family members and staff members "that they, in fact, do matter and deserve to be respected as our Christian values teach us."

However, in an April 3 statement, which the diocese released in response to a Boston Globe columnist's query about what until then had been a private discussion, McManus said "symbols can mean different things to different people."

"While the Catholic Church joins with our nation in teaching that all lives are equal before God and the law and that all lives demand our respect regardless of race, gender or ethnicity, the flag with the emblem Black Lives Matter has at times been coopted by some factions which also instill broad-brush distrust of police and those entrusted with enforcing our laws," McManus said in the statement. "We do not teach that in our schools."

The pride flag, McManus said, "is often used to stand in contrast" to Catholic teaching that sacramental marriage is between a man and a woman.

Said McManus, "Is the school committing itself to ideologies which are contrary to Catholic teaching? If so, is it still a Catholic school?"

The bishop's criticism has rankled many in Worcester. The city's Human Rights Commission requested that the progressive pride flag fly over Worcester City Hall to show solidarity with Nativity. (Like the gay pride flag, that flag has a rainbow design with additional elements representing the trans and LGBT communities of color). A day after the commission's request, the city raised the flag.

"To go for something that's so miniscule and threaten the school's Catholic identity ... In my opinion, that really isn't so Catholic," Creamer said. "It ultimately very much goes to these conservative ways, which to be quite frank, is not something the church needs right now."

"The city has a significant homeless issue at the moment that we're trying to tackle," Rose told NCR. "We have food insecurity issues we're tackling. We've seen people lose their homes due to the foreclosure moratorium being lifted. We have substance abuse issues. We have all these things happening around us in real time, so to pick on a school comprised of mostly brown and Black students, to say they can't raise a flag that supports the Black Lives Matter Movement or supports gay pride, is just really sad."

Marianne Duddy-Burke, the executive director of DignityUSA, a Massachusetts-based nonprofit that advocates for LGBTQ rights within the Catholic Church, told NCR that the clash in Worcester was "the latest clear example" of members in the hierarchy seeking to define Catholic identity in "a narrow and very exclusive" manner.

"I think it should force us to reckon with the fact that there is a group of culture warrior bishops within the ranks of the U.S. hierarchy," Duddy-Burke said. "In my mind they're really amplifying a white Christian nationalist agenda."

Duddy-Burke said McManus' statement echoed the comments that Archbishop José Gomez of Los Angeles made in November about modern social justice movements. In a speech to a Catholic group in Spain, Gomez — who is also the president of the U.S. Conference of Catholic Bishops — denigrated those movements as anti-Christian, Marxist-inspired "pseudo-religions."

"I just remember being absolutely gutted to hear that kind of language coming from the president of the USCCB in the midst of this racial justice reckoning happening throughout the culture in our country," Duddy-Burke said. "To hear it even echoed faintly in Bishop McManus' approach to Nativity is very troubling."

The bishop's supporters include C.J. Doyle, executive director of the Catholic Action League of Massachusetts, a conservative group. Doyle told NCR that McMannus has a responsibility to "preserve the Catholic identity of Catholic schools." He noted a recent Vatican document, "The Identity of the Catholic School for a Culture of Dialogue," which says a bishop can intervene "whenever he deems it appropriate" to address concerns over the Catholic schools in his diocese, even those founded or directed by religious orders.

"While Catholic schools should welcome everyone who is willing to respect the mission and the identity of the school, pride flags symbolize, unambiguously, the rejection of Catholic moral teaching," Doyle said.

"Bishop McManus, who as ordinary of Worcester, is charged by canon law with protecting the identity of Catholic schools — both diocesan and religious — in that diocese, would have been derelict in his responsibilities, had he failed to act," Doyle said.

In his 18 years as Worcester bishop, McManus' hardline stances on cultural issues have generated other controversies. In 2012, he objected to Anna Maria College in Paxton, Massachusetts, inviting Victoria Reggie Kennedy as its commencement speaker. Kennedy, the widow of the late Sen. Ted Kennedy, supported abortion rights. The school withdrew its invitation.

In 2019, McManus delivered a speech at the College of the Holy Cross where he described transgender identity as being "rooted in unsupportable science." Officials at Holy Cross rebuked him for comments that they said were "deeply hurtful and offensive to many members of our community."

In his April 3 statement, McManus said it is his role as a Catholic bishop to teach that it is "imperative that a Catholic School use imagery and symbols which are reflective of that school's values and principles so as to be clear with young people who are being spiritually and morally formed for the future."

He said that while the school's role is not to convert those who are not Catholic, "nor is it our role to deny our Catholic identity."

In the meantime, Creamer said Nativity School remains "a beacon" in Worcester as it continues to educate students from disadvantaged backgrounds in grades five to eight. According to the school's website, nearly half its 61 students are Black, 33% are Hispanic and 20% are multiracial. Families pay a $250 activity fee, but no tuition.

Many students enter Nativity performing two or three grades below level and are expected to improve six or seven grade levels over the course of their four years, according to the school website.

"The majority of responses I've seen here is that the bishop is out of touch," Creamer said. "Everyone I speak with is of the opinion, 'Leave Nativity alone.' "

A version of this story appeared in the April 29-May 12, 2022 print issue under the headline: Bishop requests school remove BLM and pride flags.