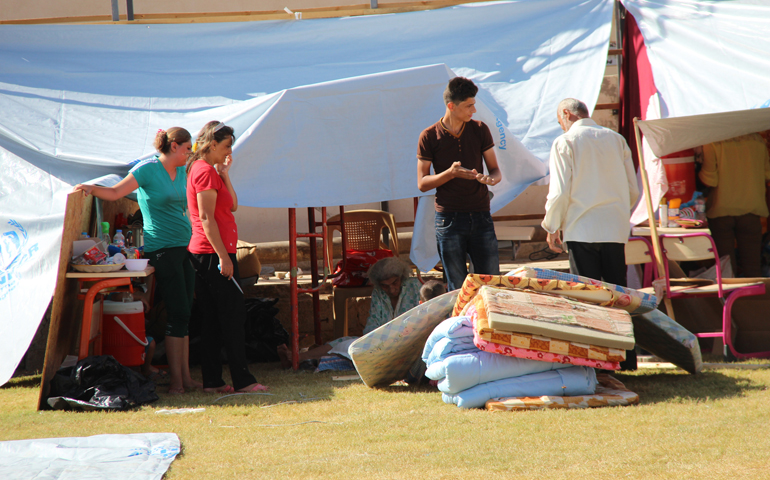 People displaced by violence stand outside their tent at St. Joseph Chaldean Catholic Church in Ankawa, Iraq, Aug. 14. (CNS/Courtesy Aid to the Church in Need-USA)

The airstrikes, the first major U.S. military involvement in Iraq since President Barack Obama pulled out combat troops in 2011, are intended to thwart a hyperviolent jihadist group called the Islamic State, which is storming northern Iraq in an effort to establish an Islamic caliphate.

Earlier this year, the Islamic State crossed into Iraq from Syria. Since that time, they have armed themselves with U.S.-made weapons and forced Iraqi citizens -- Christians and an ethno-religious minority group called the Yezidi, in particular -- to convert to their brand of Islam, flee from their homes, or face oftentimes brutal forms of execution.

Before the strikes, the Islamic State appeared poised to take the town of Irbil, home to a U.S. consulate; at the same time, tens of thousands of Yezidi were trapped on top of a mountain, facing the possibility of genocide.

Announcing the strikes, Obama said that he "ran for this office in part to end our war in Iraq and welcome our troops home, and that's what we've done. As commander in chief, I will not allow the United States to be dragged into fighting another war in Iraq."

"But when the lives of American citizens are at risk, we will take action. ... And when many thousands of innocent civilians are faced with the danger of being wiped out and we have the capacity to do something about it, we will take action. That is our responsibility as Americans," the president said.

How, then, does "our responsibility" square up with America's decision to invade and occupy Iraq in 2003?

"It's ironic, to say the least," said Thomas Weiss, an international relations expert at the City University of New York Graduate Center. "By screwing things up in the first place, we helped create the situation that we're now trying to alleviate."

Few today find reason to criticize the most recent decision to intervene in Iraq. Even the pope, who cried, "Never war! Never war!" July 27 upon the 100th anniversary of the outbreak of World War I, has lent support to some form of action, while not endorsing military force.

Speaking to reporters on a plane ride back from South Korea Aug. 18, Pope Francis said, "Where there is an unjust aggression, I can only say that it is licit to stop the unjust aggressor. I underscore the verb 'stop.' I'm not saying 'bomb' or 'make war,' just 'stop.' And the means that can be used to stop them must be evaluated."

He added, in apparent reference to the U.S., "One nation alone cannot judge how you stop this, how you stop an unjust aggressor."

The pope's cautious and conditional support for the strikes stands in stark contrast to the ardent opposition of Pope John Paul II to the March 2003 invasion of Iraq.

War is "always a defeat for humanity," John Paul said in a Jan. 13, 2003, address to the diplomatic corps accredited to the Holy See.

Addressing "the threat of a war which could strike the people of Iraq," he said, "War cannot be decided upon, even when it is a matter of ensuring the common good, except as the very last option, and in accordance with very strict conditions, without ignoring the consequences for the civilian population both during and after the military operations."

But John Paul's words were quite different -- much closer to Francis' in 2014 -- when he urged international intervention to stop the genocide in Bosnia in 1993. Nations do not have the "right to indifference," John Paul said then, urging the community of nations to "disarm the aggressor."

Catholic historian David O'Brien sees a pattern in this.

"The general picture is a gradual move [within Catholicism] from just war at the center and non-violence as 'an option for individuals' to nonviolence at the center and just war as the exception," O'Brien told NCR in an email. "John Paul II applied just war criteria more rigorously than in the past and seemed at times to leave the door open only for intervention (to end war and/or make or keep peace as in Bosnia) by 'the international community.' " That precedent "almost [ruled] out unilateral action, as in Iraq both times."

"This is something that had to be done," Archbishop Giorgio Lingua, Vatican nuncio to Iraq, said in reference to the airstrikes. "Otherwise, [the Islamic State] could not be stopped."

Weighing in on the legitimacy of the strikes, experts tend to reference the doctrine of "responsibility to protect," an international norm that allows for military force so long as it comes as a last-ditch effort intended to secure vital human rights or a humanitarian aim.

"This is a quintessential responsibility-to-protect situation," Weiss said. Whereas "the 2003 adventure was by no stretch of the imagination related to anything humanitarian."

"The situation today is one in which most of the things we usually argue over in terms of proportionality, in terms of just cause, in terms of whether or not intervention is going to do more harm than good -- a whole set of things that you see applied in just war doctrine -- don't apply," Weiss said.

When it comes to the current intervention in Iraq, he said, Security Council authorization is "the only thing that's missing" from the responsibility-to-protect norm as approved by the U.N. General Assembly in 2005. "So you could argue that just authority is absent, but only if you think that the Security Council is the sine qua non for action," Weiss said.

Another just war expert, Jesuit Fr. Drew Christiansen of Georgetown University's School of Foreign Service, said, "A whole people is threatened with extermination or mass deprivation of their rights. That's what you have here."

And even though the Catholic position "has become more and more nonviolent over the last 30 years ... the core of [responsibility to protect] is that you have to resist people sometimes, either through nonviolent means or the use of force when necessary."

So then, what does "our responsibility as Americans" say about America?

"I think you have to see this intervention not as a new military intervention but as a continuation of the 2003 intervention and occupation, and all the responsibilities that come with that," said Gerard Powers of the Kroc Institute for International Peace Studies at the University of Notre Dame.

"There's always a tendency in the debate over Iraq to say, 'The Sunnis, the Shias, the Kurds, they've been fighting each other forever -- ancient hatred -- this is not our deal,' and then just wash our hands of it," Powers said. "But we're not a neutral player. We haven't been since we supported Saddam Hussein against Iran in the 1980s, at least.