Abductions of two priests in Congo a growing concern 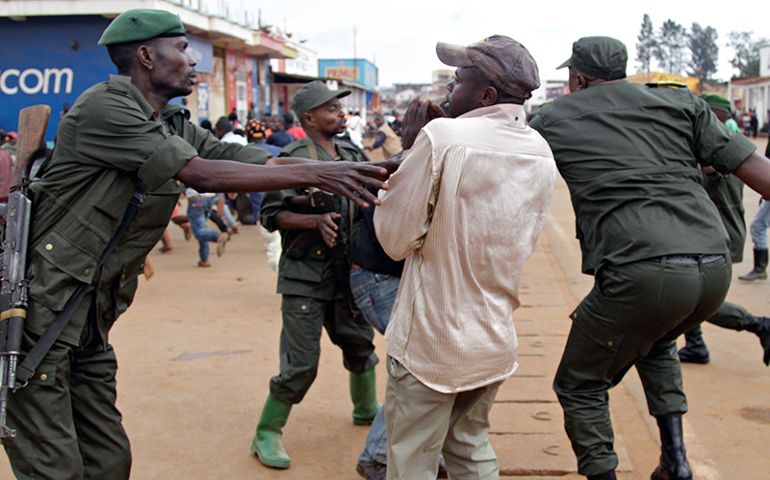 Congolese soldiers arrest civilians protesting against the government's failure to stop the killings and interethnic tensions in the town of Butembo in the country's North Kivu province, on Aug. 24, 2016. (Photo by Kenny Katombe/Reuters)

The abduction of two Roman Catholic priests in Congo is raising concern over the number of hostages held by local militias in the troubled country.

Earlier this month, Frs. Charles Kapasa and Jean Pierre Akilimali were abducted from the Parish of Notre Dame in the Butembo-Beni Diocese. They have not been seen since.

Armed raiders entered the parish, looted a vehicle and motorbike and beat up seminarians before fleeing with the two priests, according to news reports.

“The kidnappers are demanding ransom for their release,” said Bishop Marcel Utembi, president of the Conference of Catholic Bishops in Congo. “At the moment everything seems to lead us to believe that these two priests are alive. Contacts have been made with the public authorities, the ecclesiastical authorities and the group of kidnappers, whose precise identity is not well-defined.”

Utembi said he didn’t know what motive the kidnappers may have and he declined to provide the figure for the ransom demand, citing security issues.

Three Assumptionist-order priests were seized in 2012 from the same area and have never been found.

In addition, more than 1,000 people are currently in the hands of the kidnappers, according to the bishop.

While Cameroon, Nigeria and Mali have also seen priest abductions, Congo appears to be taking a lead.

The Catholic Church is the largest religious group in Congo, and about 50 percent of its residents are members. (Twenty percent are Protestant and 10 percent Muslim.)

The priests come from the same area where in March 2016 militants murdered Fr. Vincent Machozi Karunzu, a priest monitoring human rights abuses. In December of the same year, a nun was killed in a robbery attempt in Bukavu town in the neighboring South Kivu.

“We are aware of the challenging situation in DRC (Democratic Republic of Congo) and we continue to pray and support the church in the country,” said the Rev. Chrisantus Ndaga, deputy secretary-general of the Association of Member Episcopal Conferences in Eastern Africa.

The North Kivu people have been staging silent protests over the kidnapping, shunning farms and markets bringing commerce in the area to a standstill.

Hostages are usually released after employers or relatives pay the ransom. Some incidents have involved international aid workers.

Several militia groups operate in the eastern region of Congo, including the Mai Mai (Mayi Mayi), a collection of six Congolese groups, which often target civilians and U.N. peacekeeping forces; the Allied Democratic Forces–National Alliance for the Liberation of Uganda, an Islamist militia; and the Democratic Forces for the Liberation of Rwanda, a group formed by a former Rwandan Hutu ethnic group linked to the 1994 genocide and which the U.S. classifies as a terrorist organization.

World | Abductions of two priests in Congo a growing concern