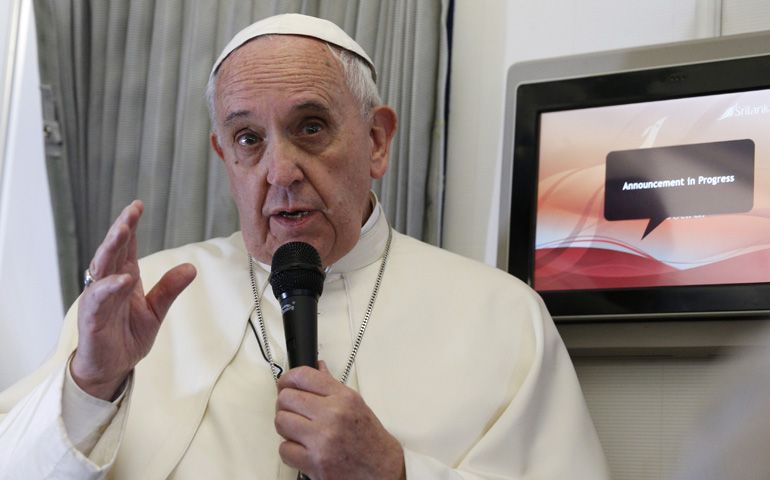 Pope Francis answers questions from the media Thursday aboard his flight to Manila, Philippines. (CNS/Paul Haring)
This article appears in the Francis in the Philippines feature series. View the full series.

Aboard the papal plane to Manila, the Philippines — While stating forcefully that "one cannot kill in the name of God," Pope Francis said there should be limits in the practice of freedom of expression that bar things such as insults against faith.

Responding to a question related to the murders in Paris last week of journalists working for Charlie Hebdo magazine, the pope said first that religious liberty and liberty of expression are both "fundamental human rights."

Francis spoke Thursday in a 45-minute news conference aboard the papal plane traveling from Sri Lanka to the Philippines.

The pope's response regarding free expression was part of a wide-ranging discussion that touched on other subjects, including climate change, suicide bombings, evolving Catholic understandings of interreligious dialogue, and fears for his own safety in the face of threats against his life.

He also predicted at one point that his upcoming encyclical on the environment would be released by July.

But then the pope began to outline what he sees as important limits on free expression. Francis began by joking that if someone were to swear against his mother, "a punch awaits him."

"There is a limit," he said. "Every religion has its dignity."

Responding to a general question about the interplay between religious liberty and free expression, Francis noted that the journalist who posed the question was French and spoke directly to last week’s murders, saying, "Let’s go to Paris, let’s speak clearly."

Twelve people were killed Jan. 7 at the Paris headquarters of Charlie Hebdo, a satirical publication known for publishing provocative cover cartoons that sometimes make fun of or openly insult religious figures, including the Prophet Muhammad.

Francis also revealed that is he planning to canonize Blessed Junipero Serra, an 18th-century Spanish Franciscan missionary who founded many of the then-mission towns on the North American West Coast, during his visit to the U.S. in September.

Initiating the press conference Thursday with a few moments of prepared remarks, the pope said he has chosen to canonize several saints over the past 18 months who are known as great evangelizers of the faith.

"Now, in September, God willing, I will canonize Junipero Serra in the United States," he said.

Perhaps the most gripping moment of the press conference Thursday came when Francis talked about how he considers his own safety and how he responds to threats made against his life by Islamic militants.

"The best way to respond is always meekness," the pope said. Asked if he worries about the safety of Catholics who visit him in big audiences, he said: "I am worried about the faithful, truly."

"On this, I have spoken with Vatican security, who are charged with solving this," he said. "And they are informed of this problem."

Revealing one of his personal prayers, Francis referred to what he has asked God should any harm come to him.

"I am not courageous in front of pain," Francis said. "I am very, very timid."

One of Francis' key events during his Sri Lankan trip Tuesday through Thursday was an outdoor Mass for the canonization of that country's first saint, the Portuguese-Indian 17th-century missionary Fr. Joseph Vaz.

Perhaps the most heartfelt moment of the press conference came when Francis addressed a question from a Philippine journalist, who asked what the pope might say to the many people in the Philippines who would like to see him during his visit to the country Thursday through Sunday but will be unable to.

Responding slowly, Francis said: "My response to this question risks being overly simple."

"The central message of this trip will be the poor," he continued. "The poor who suffered from [2013's super Typhoon] Yolanda and are still suffering the consequences; the poor who have faith and hope."

"I think of the poor who are exploited, those who suffer many injustices, material, spiritual and existential," the pope said, adding that at one of his daily Masses at the Vatican guesthouse a few days ago, he met some Philippine migrants who left home searching for work.

"I stayed with them, and they told me how they left their county to look for a better life, leaving behind Mom, Dad and children," he said.

Francis did not respond directly to a question regarding whether he thought climate change had been mostly caused by human activity.

"We have taken possession of nature and Mother Earth," he said, adding that he remembered a saying: "God always forgives; we men sometimes forgive; but nature never forgives."

"I believe that man has gone a bit too far," he said. "Thank God that today, many, many people are talking about it."

The pope also said he thinks an encyclical he is writing about the environment will be completed in March, but it will then need to be translated and prepared for publication. He said he thinks it might be released to the public in June or July.

"The important thing is that there is a bit of time between the presentation of the encyclical and the meeting in Paris," the pope said, referring to the meeting of the United Nations Climate Change Conference, to be held in Paris this November and December.

Francis also said he had been disappointed by the U.N.’s last meeting on climate change, held in December in Peru. "There was a lack of courage," he said. "Let’s hope that in Paris, they are more courageous."

Asked for his thoughts about recent global suicide bombings that have involved participation of women and children, Francis compared such attacks to use of Kamikaze pilots in World War II, indicating that they are the result of totalitarian systems.

"The totalitarian system kills if not life, then possibilities: kills future, kills many things," Francis said. "This problem is not over, it is not only a problem in the East."

Francis was also asked how he might respond to people concerned about his visit to a Buddhist temple in Sri Lanka on Wednesday or to people who believe Buddhism is a religion "of the devil."

Equating such a belief with pre-Second Vatican Council teachings regarding Protestant Christians, Francis said when he was a child, "all the Protestants were going to hell. All of them."

Francis said his first experience of ecumenism occurred when he was 4 or 5 years old, walking down the street with his grandmother. They saw two women from the Salvation Army wearing hats similar to those worn by some women religious.

"I believe the church has grown a lot in respect, in interreligious encounter, in the way we use words," Francis said. "There have been dark times in the history of the church, and we have to say that with shame."

Francis is visiting the Philippines as the second trip in a two-part Asian voyage that saw him first visit Sri Lanka from Tuesday to Thursday.

After his arrival in Manila on Thursday afternoon, Francis was not scheduled to make any more public speeches until a meeting with the country's president, Benigno Aquino III, and the country's diplomatic corps Friday morning.

Later Friday, the pope will have a meeting in Manila with Philippine families. On Saturday, he will fly to Tacloban, an area southeast of Manila that was severely impacted by super Typhoon Haiyan in November 2013.

On Sunday, the pontiff will celebrate a public Mass in Manila's Rizal Park, an event the Vatican has called a "mega Mass" that is expected to draw crowds in the millions.

Three million French people in the streets, and an uncertain tomorrow