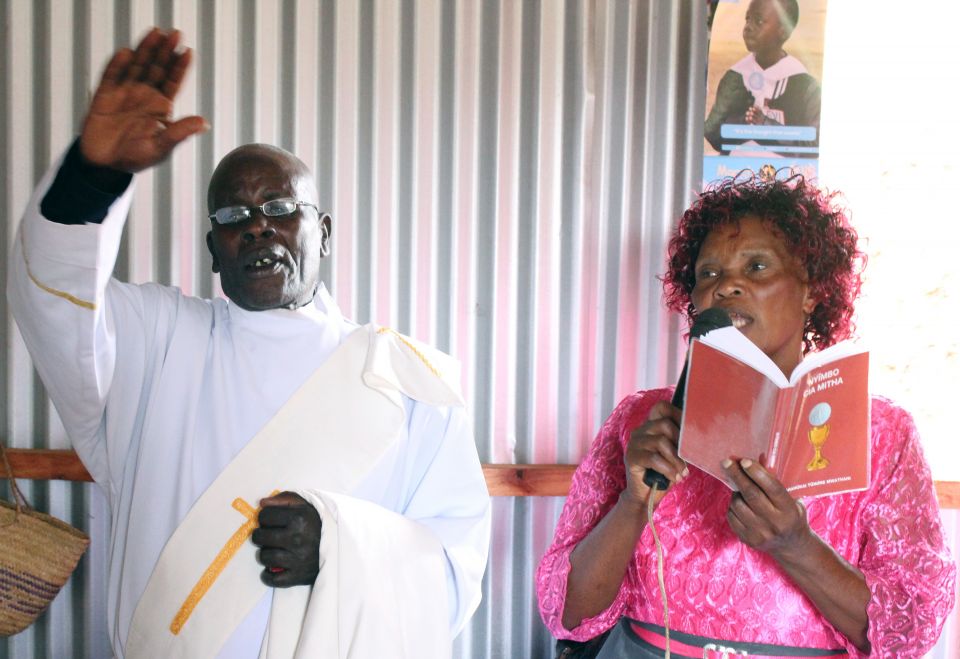 Philip Muiga, left, sings with his wife, Octavia Wangari, before he was ordained as a priest in the Renewed Universal Catholic Church in April 2018, in Nyeri County, Kenya. (RNS/Doreen Ajiambo)

Like Njogu, a former Roman Catholic priest and the founder of the Renewed Church, all three of the new priests are married.

"I'm happy because I have been ordained as a priest in this church," said Philip Muiga, 52, a former Roman Catholic priest. "With the experience I have, I will be able to perform my duties as a priest and also as a father."

Muiga and others are among more than 20 priests, including several ordained in July, who have renounced their vows of celibacy, proposed to women and joined the Renewed Universal Catholic Church since late 2017.

Njogu, who launched the new church from his Mweiga Catholic parish in Nyeri Archdiocese in 2012, said many Roman Catholic priests are already abandoning celibacy. His new church, he said, was simply acknowledging reality.

"We want priests to get married so that they can live a pure life without pretense," said Njogu, a 55-year-old father of three. "Many priests and bishops have secret families which they have abandoned because they fear losing the privileges that come with priesthood, such as a good house and vehicles. Some priests even prey on children and abandon them."

Njogu's journey toward schism began in 2002, when Pope John Paul II excommunicated him for his relationship with his longtime companion, Berith Karimi. Soon afterward, the priest and Karimi married. Former Zambian Archbishop Emmanuel Milingo, who had also been excommunicated for marrying a woman, then ordained Njogu as a bishop, paving the way for the establishment of a new church.

Other Catholic priests said Njogu was addressing a concern widely shared among the local clergy. "He is speaking our minds," said a priest in Nairobi who wanted to remain anonymous for fear of being suspended. "Everyone wants the issue of celibacy to be discussed and resolved.

"It's true that we desire families. But it's also true that some priests have secret families and others continue to prey on children to satisfy their sexual needs," he said.

Njogu has urged Pope Francis to consider ordaining married men as priests to prevent clergy from defecting to Njogu's church, saying he was planning to ordain more priests next year.

Njogu, who is also a lecturer of philosophy and religious studies at Kenyatta University in Nairobi, explained that until the church introduced the rule on celibacy in the late Middle Ages, 11 popes had married without the church suffering.

Pope Francis had floated the possibility of ordaining married priests, especially in isolated communities where there is shortage of clergy. But he ruled out making celibacy optional last year.

"I want to urge our pope to make priestly celibacy optional to increase transparency in the church," Njogu said. "Celibacy is not biblical and doesn't sanctify priesthood, because priesthood is a calling. We need to change the law on mandatory celibacy because it's leading to allegations of child abuse in the church."

However, in an interview with Religion News Service, Bishop Philip Anyolo, chairman of the Kenya Conference of Catholic Bishops, dismissed Njogu's statements, saying no priests are willing to leave the church. "Priests have been called for a special mission and they cannot serve two masters," he said.

"Those who are leaving are a few individuals, and we'll continue to pray for them so that they can live a holy life wherever they go."

Meanwhile, Muiga said he was enjoying the life he had missed while being celibate and he thanked God for the revelation.

"God values families and I'm proud that my children will know their father," he said. "I realized there was no problem getting married when you are a priest because even other churches are led by men of God who have families."

Canadian Copts ponder the future of their faith back in Egypt