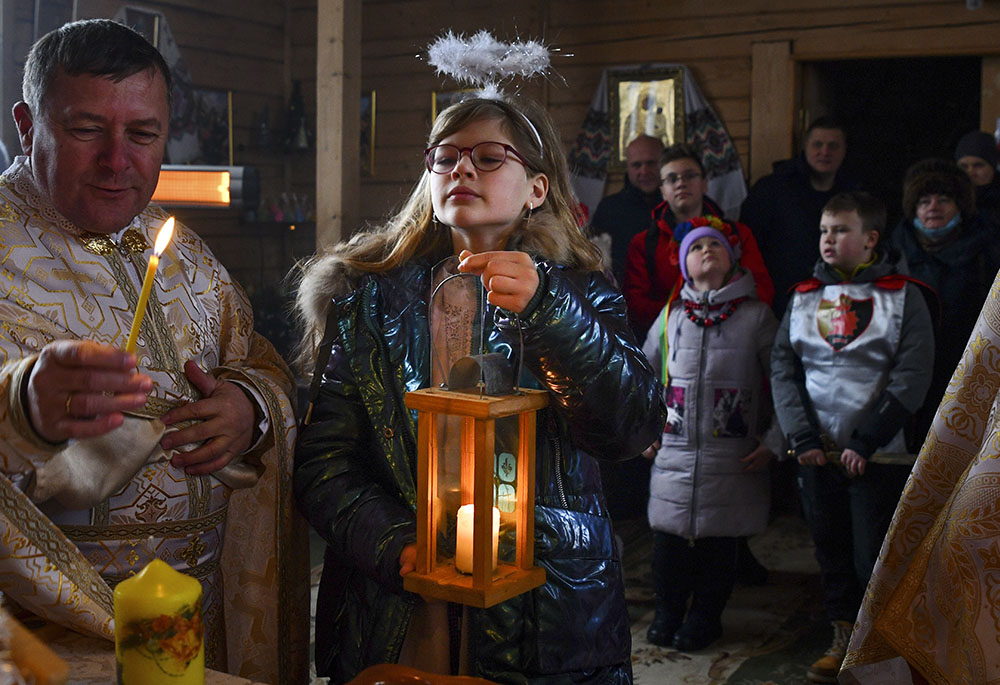 A girl holds a candle during a Christmas service at the Ukrainian Greek Catholic Church of the Holy Prophet Elijah in Kramatorsk, not far from a front line with Russia-backed separatists in eastern Ukraine, Dec. 25, 2021. (AP/Andriy Andriyenko)

When NATO's foreign ministers held emergency online talks Jan. 7 about the Russian military concentration on Ukraine's borders, the alliance's secretary-general, Jens Stoltenberg, stressed the dangers to Europe's security and warned against any aggression.

Inside the country, care has been taken not to stoke public fears. Yet behind the scenes, there's deep anxiety — not least among Ukraine's scattered Catholic communities.

"People are used to these Russian buildups, and there's been talk of invasions before — in spring, summer, autumn or winter," explained Bishop Jan Sobilo, an auxiliary with Ukraine's eastern Kharkiv-Zaporizhia Diocese.

"This time, however, they're very afraid of a real escalation. There are many mixed Ukrainian-Russian marriages here, so the front line runs through families, and our parishioners are praying for peace and a return to how things were before, when we could visit our loved ones on either side of the frontier."

Some observers have advised caution.

Russia acted similarly last April, deploying land and airborne troops on Ukraine's border and triggering warnings from Western governments — only to pull them back ahead of Putin's June 16 Geneva summit with U.S. President Joe Biden.

However, fighting has continued in eastern Ukraine's Donbas region, where Russian-backed separatists declared independent republics at Luhansk and Donetsk in April 2014, triggering a war with Ukrainian forces that has since left more than 14,000 dead. 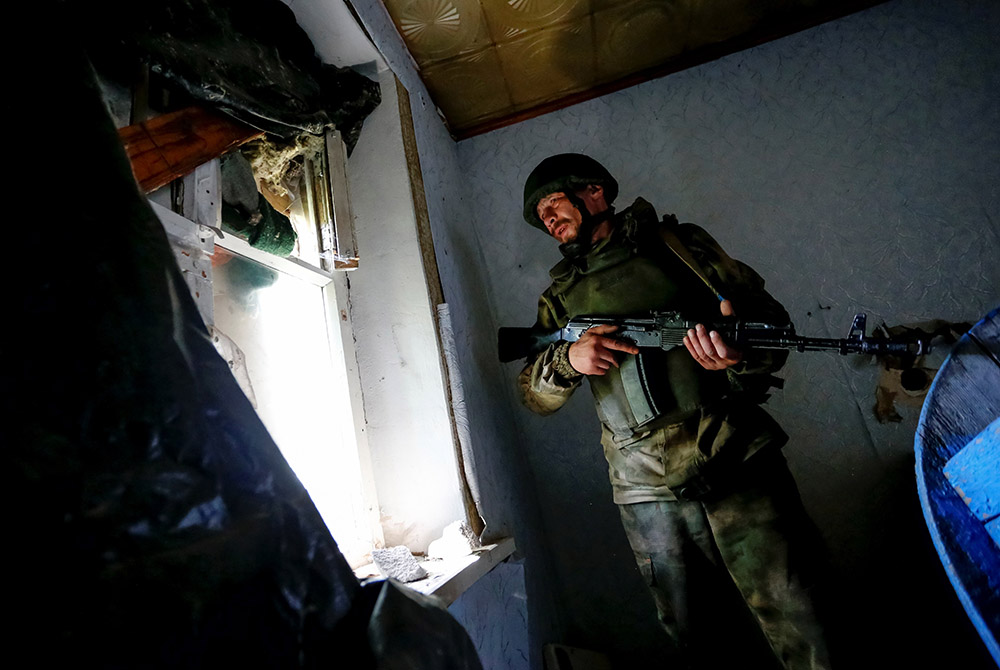 A militant of the self-proclaimed Luhansk People's Republic stands inside an abandoned house near fighting on the line of separation from the Ukrainian armed forces in Luhansk, Ukraine, July 16, 2021. (CNS/Reuters/Alexander Ermochenko)

Meanwhile, with most of the world refusing to recognize Russia's early 2014 annexation of Ukraine's Crimea peninsula, Putin's regime is using all available means to destabilize its weaker neighbor.

On Dec. 17, the regime demanded security guarantees from the United States and its allies, including a promise to end Western military activities in the Black Sea close to Russia's borders.

On Dec. 23, Putin told journalists at his annual press conference in Moscow that the blame for tension lay squarely on Ukraine and its Western backers, and pledged to "keep an eye on what's happening in Ukraine and when they might attack."

Many Ukrainians think Russia never accepted their 1991 independence after seven decades of harsh Soviet rule, and is now determined to keep their country divided and unstable.

Some see wider efforts underway to rebuild a Russian sphere of influence, and say the recent use of Russian troops to buttress the embattled government of Kazakhstan is only the latest sign of a grand hegemonic design.

Whatever the long-term strategy, ordinary people on the ground are paying the heaviest price — a reality not lost on Ukraine's religious leaders.

"This conflict, now in its eighth year, has left so much damage in people's hearts — in the end, we can only pray for eventual reconciliation, for those who've died, and for God to treat the wounds inflicted," Sobilo told NCR. 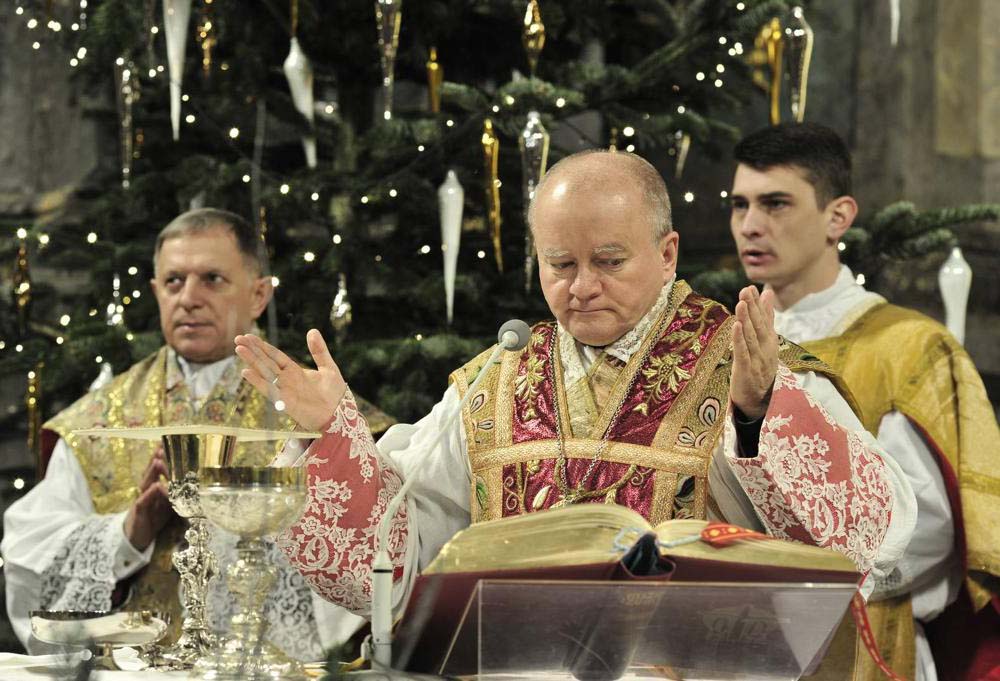 "But those with families and sufficient means have already left for western Ukraine, Poland or the countries beyond, while others have gone to Russia, fearing a coming invasion will undermine their lives forever," he said.

Having supported Ukraine's independence and sovereignty from the outset, the Catholic Church is deeply involved.

Although its Caritas agency has provided humanitarian aid to the separatist-held Donbas, its priests have been barred from the region in favor of clergy from Ukraine's Moscow-linked Orthodox Church, while demands for religious freedom from the Organization for Security and Co-operation in Europe have been ignored.

Catholics in Ukraine's armed forces have suffered numerous fatalities and injuries, alongside their non-Catholic comrades, leaving Sobilo and others to conduct joint funerals regularly with Orthodox, Protestant and Muslim clergy.

Meanwhile, many Catholic parishes would lie in the direct path of a Russian invasion, especially around strategic cities such as Kharkiv and Odessa. 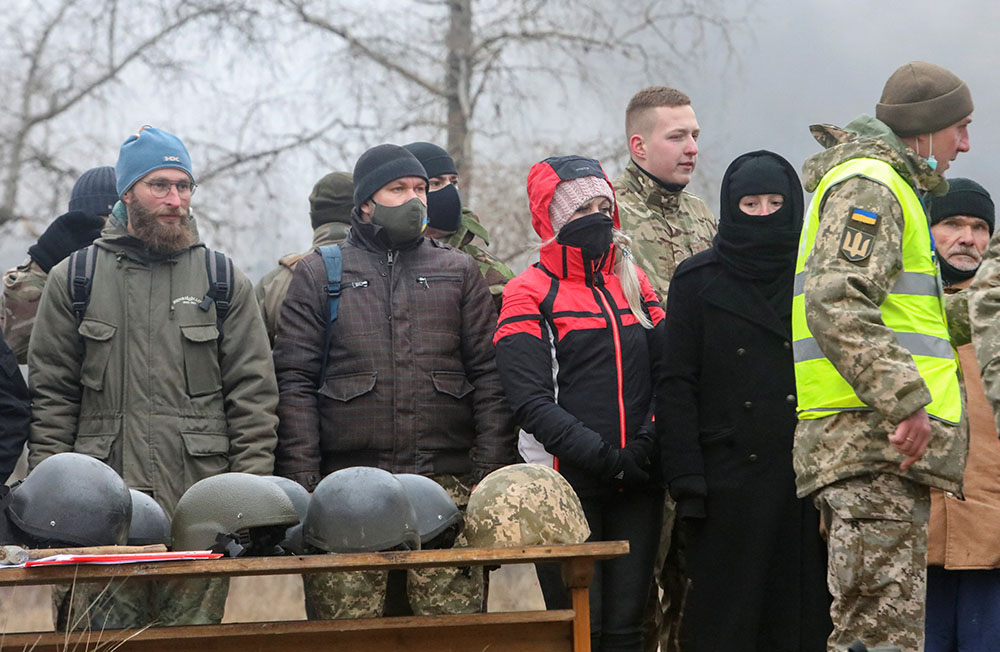 Reservists of the Ukrainian Territorial Defense Forces line up as they take part in military exercises at a training ground outside Kharkiv, Ukraine, Dec. 11, 2021. (CNS/Reuters/Vyacheslav Madiyevskyy)

Despite this, most local clergy are determined not to be intimidated.

"We're accustomed to this situation now, and have seen these threats before — and though some people are very much afraid of the Russian buildup this time, they've plenty of other problems to worry about," said Fr. Anatoliy Kozak, rector of St. Anthony of Padua Parish at Kherson, close to the Crimean border.

The Odessa-Simferopol Diocese to which the parish belongs has expanded rapidly since Ukraine's independence, and now has more than 70 priests, compared to just one three decades ago.

"With the TV showing images daily of troops and tanks on our borders, many are now nervous that conditions are about to worsen," said the priest. "But it's all happened before, and a full-scale Russian action still seems unlikely."

The Kiev press office of Ukraine's larger Greek Catholic Church was fearful about answering questions on the current security threat. However, the church, which combines the Eastern rite with loyalty to Rome, has made repeated peace appeals.

In November, its governing synod warned that Russia was also exerting pressure through "politically motivated energy prices," and appealed for internal reforms to "avert the enemy threat and ensure a better future for Ukraine."

On Dec. 1, the church's major archbishop, Sviatoslav Shevchuk of Kyiv-Halych, told an international security forum that Ukraine was "fighting for its future," to avoid returning to a time when the Christian faith was persecuted and forced underground.

"Unfortunately, the rhetoric from the north is telling us to go back to the Soviet Union — but we are striving to move forward to a free community of states, a European family of nations," Shevchuk added. 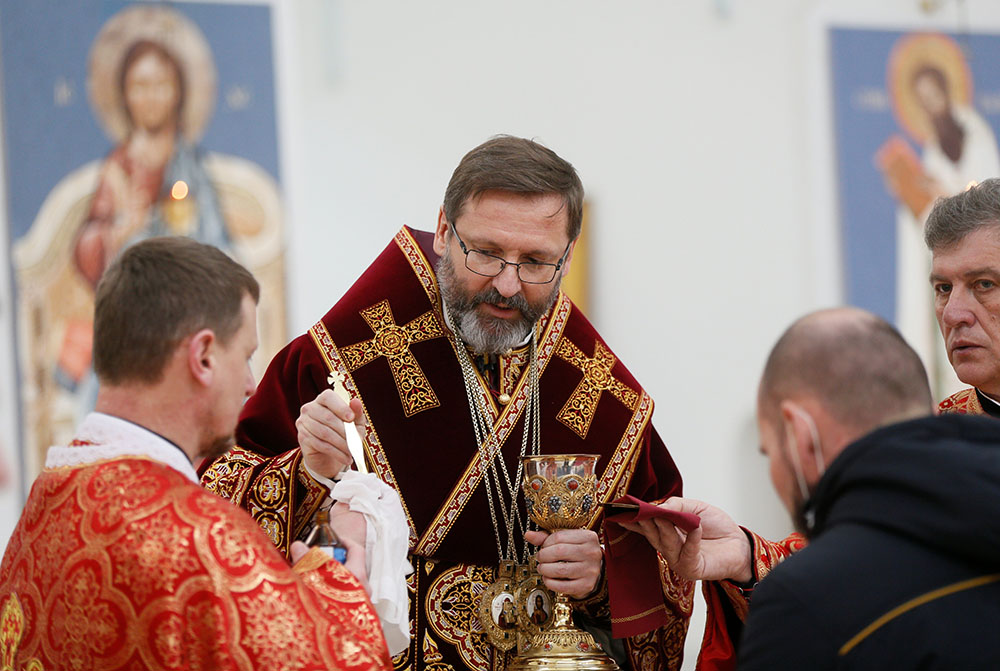 Archbishop Sviatoslav Shevchuk of Kyiv-Halych, Ukraine, major archbishop of the Ukrainian Catholic Church, celebrates the Divine Liturgy at the Cathedral of the Resurrection of Christ in Kiev March 22, 2020. (CNS/Reuters/Valentyn Ogirenko)

At Christmas, the archbishop sent greetings to Ukrainians in occupied Donbas and Crimea, as well as to Ukrainian soldiers celebrating the season "on the front lines in cold trenches."

Besides its Latin and Greek Catholic minorities, Ukraine is home to a large Orthodox population. Counting about 70% of the country's 44 million inhabitants, the Orthodox are currently divided between the church under the jurisdiction of Russia's Moscow Patriarchate, and a new independent Orthodox Church of Ukraine set up three years ago under guidance from the ecumenical patriarch, Bartholomew.

Russia's Orthodox Church cut ties with Bartholomew for establishing the new ecclesial structure, and has since broken with Orthodox churches in Greece and Cyprus for recognizing it, as well as with the ancient Patriarchate of Alexandria.

It's accused Ukrainian officials of seizing its places of worship and pressuring its communities to desert in favor of the new church — and when Bartholomew visited Ukraine in August, he encountered fierce Russian hostility.

Backing has come, however, from the U.S., whose acting ambassador, Oksana Markarova, visited the church's leader, Metropolitan Epifaniy Dumenko, at his Kiev residence on Jan. 4. Her embassy said on social media that Ukrainians " should be free to worship as they choose, without external influence."

Meanwhile, Dumenko insists most Ukrainians support his church, and says further recognition, in the face of Russian "aggressive actions," is expected soon from Orthodox churches in Romania, Bulgaria, Georgia, Albania and Jerusalem.

He's welcomed legislation in the Verkhovna Rada parliament requiring the Moscow-linked church to rename itself the "Russian Orthodox Church in Ukraine," as well as a new law banning Moscow-linked clergy from serving as military chaplains, after media reports that some had cooperated with Russian occupation forces.

With talk emerging in late 2021 of a possible Ukraine visit by Pope Francis, some express hope that high-level efforts may soon be underway to restore calm.

During a Nov. 12 Vatican audience, Shevchuk explained current conditions to Francis. The pope later appealed against "fresh outbreaks of a long-festering conflict" in Ukraine during his Dec. 25 urbi et orbi Christmas message.

Francis received a glowing message from Putin for the pope's 85th birthday on Dec. 17, and held talks with the Russian church's foreign relations director, Metropolitan Hilarion Alfeyev, in Rome on Dec. 22.

In early January, Ukraine's new ambassador to the Vatican, Andriy Yurash, confirmed that Francis hoped to discuss Ukraine during a possible second encounter after Easter with Russian Orthodox Patriarch Kirill. Francis and Kirill are the first leaders of their churches to meet, holding a summit in Cuba in February 2016.

"Russian diplomats will do everything to prevent a papal visit to Ukraine," Yurash told an interviewer. "But Francis wishes to create a climate of prayer which could assist to advance peace and dialogue, as well as communication between people, including religious communities."

Kozak, the parish rector from Kherson, is skeptical.

"If the pope does come, we should hope he can help encourage a return to stability calm and good-neighborly ties," the priest told NCR.

"This would certainly be a great blessing from God, and a great asset for ordinary people in today's complex, tense situation. But for now, I'm just concentrating on my parish duties and all the other problems meriting our attention," he said.

"Such a visit would depend on many factors — but we've been asked to pray that it might still be possible this year, bringing Russians and Ukrainians together," the bishop told NCR.

"War spares no one, and everyone, Catholic and Orthodox alike, suffers from it," he said. "If the Holy Father could reach areas close to the front line, he could rebuild, through prayer and personal presence, a bridge that was destroyed in 2014, helping exorcise and expel the evil spirits which have struck at our spiritual life for so long."

In the meantime, the stakes are high.

Over the Orthodox Christmas, as the Russian buildup continued, Ukrainian officials said Donbas occupation forces had opened up with heavy-caliber machine guns near Luhansk in violation of past agreements.

On Jan. 10, NATO officials began talks in Geneva with Russian representatives, the first for two years, hoping, in the words of Stoltenberg, to "find a political way forward."

But the U.S. and Western governments have rejected Russian demands they make unilateral troop withdrawals from Eastern Europe and rule out Ukraine's future membership of NATO, reiterating full support for Ukraine's sovereignty and territorial integrity, as well as for its right to decide its own future.