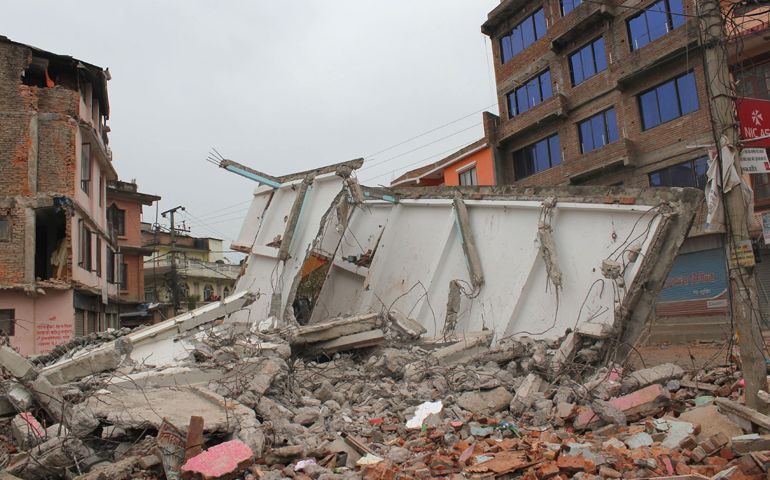 Remains of the Pentecostal Church are seen April 28 in a suburb outside Kathmandu, Nepal. Twenty-nine worshippers died and 36 trapped people were rescued after the church building collapsed following a magnitude-7.8 earthquake April 25. (CNS/Anto Akkara)

Kathmandu, Nepal — When a 7.8-magnitude earthquake roared through this Himalayan nation April 25, leaving an estimated 5,500 dead and more than 11,000 injured, shrines and temples were sent crashing to the ground, many of them centuries old and irreplaceable cultural treasures.

According to the United Nations, 600,000 houses have been destroyed or damaged, and 2 million Nepalese will need tents, water, food and medicine. Many here say they will also need God, regardless of what happened to the temples, shrines and churches.

That is, if people believe God is still around.

"This is going to further strengthen people's faith in God, and they will be trusting the Almighty for bringing things back in order," said Ankit Adhikari, a Kathmandu-based singer and former journalist.

The fifth-century Pashupatinath Temple, situated on the banks of the Bagmati River in Kathmandu, is one of the most sacred Hindu temples of Nepal. The temple, which is a UNESCO cultural heritage site and dedicated to the Hindu god Shiva, has been a scene of mass cremations since the earthquake.

"I can't actually say if God made all this happen," said Adhikari, noting the fact that Pashupatinath remains standing "is something that points to the presence of God."

About 80 percent of Nepalese are Hindu, making Nepal the second-largest Hindu nation outside of India, with about 2 percent of the global total. Most Hindus believe in a kind of fatalism, and many here seemed unrattled by the quake as a test of faith, even as their temples and shrines were flattened.

"God had predestined it. He knew about it," said Suresh Shrestha, a Hindu and a hotel owner. His house was partially damaged and he is living in a tent on the Tundikhel ground in Kathmandu.

Akriti Mahajan, a young girl who was standing outside her family's tent nearby, suspects that man-made climate change had something to do with it. "Humans are behind it," she said. "If God had a role, this wouldn't have happened."

Further along the encampment, Nir Bahadur Lama, a Buddhist and student playing games on his phone in the next tent, said it's about laws of nature and life. "As a Buddhist, I'm not sure if there's a God, the way Hindus and others understand him."

Despite Nepal's overwhelming Hindu majority, the small, mountainous country is also the birthplace of the Buddha, and the quake did not discriminate in its destruction of sacred sites.

West of Kathmandu, just outside the Indian border, the city of Lumbini is sometimes called the "Buddhist Bethlehem" because it is the birthplace of Siddhartha Gautama, the Indian nobleman who became the Buddha, in 623 B.C.

While the Lumbini complex survived with minimal damage, according to officials, the fifth-century Swayambhunath temple complex outside Kathmandu was punctuated with piles of debris from the monuments that stood adjacent to the stupa (or shrine) of Swayambhu, the oldest Buddhist monument in Kathmandu Valley.

Swayambhunath is also called the "monkey temple" for a community of sacred monkeys that live on the site. The temple, built around the oldest stupa, or Buddhist monument, in the Kathmandu Valley, marks the spot where Buddhists believe that Manjushri, an enlightened being associated with wisdom, had a vision of a giant lotus growing in the water-filled valley.

Lama Jimba, a monk from a monastery inside the massive complex, said an earthquake couldn't be explained in religious terms.

"We don't know why this happened," he said.

Muslims make up about 4 percent of Nepal's 28 million people, and some mosques suffered partial damage, including the Kashmiri Takiya Jame mosque in Kathmandu. Ataulla Khan, a dealer of a local mobile SIM card company and a Muslim, said God sent the earthquake to warn nonbelievers about the end of the world.

"According to the Quran, the creator of the universe has said again and again that he will bring an end to the creation," he said.

Christians are a tiny minority -- just 2 percent -- in Nepal, and many churches hold worship services on Saturdays instead of Sundays, when many people work. So when the quake struck in the late morning, many worshippers were trapped inside, or worse.

Kanan Church in the Sukedhara area of Kathmandu crumbled during its worship service. At least 26 Christians, including the pastor and his wife, were killed. The Baton of Salvation Church, another independent church, in the Buddha Park area, also collapsed during the worship service. Rescuers have pulled out 15 bodies from the rubble; the pastor and one of his two sons were among the victims.

Bishop Narayan Sharma of the Believers Church in Kathmandu said epic disasters are "just a natural process of life and nature," adding, "It should not be taken as punishment from God for humanity."

Such a calamity "brings our soul closer to the Creator," he added, "and to our fellow human beings too."

World | Amid Nepal's shattered shrines and temples, a religious fatalism sets in

Sister steps up efforts to send water filters to Nepal

In Nepal, Catholics reach out to remote areas devastated by quake