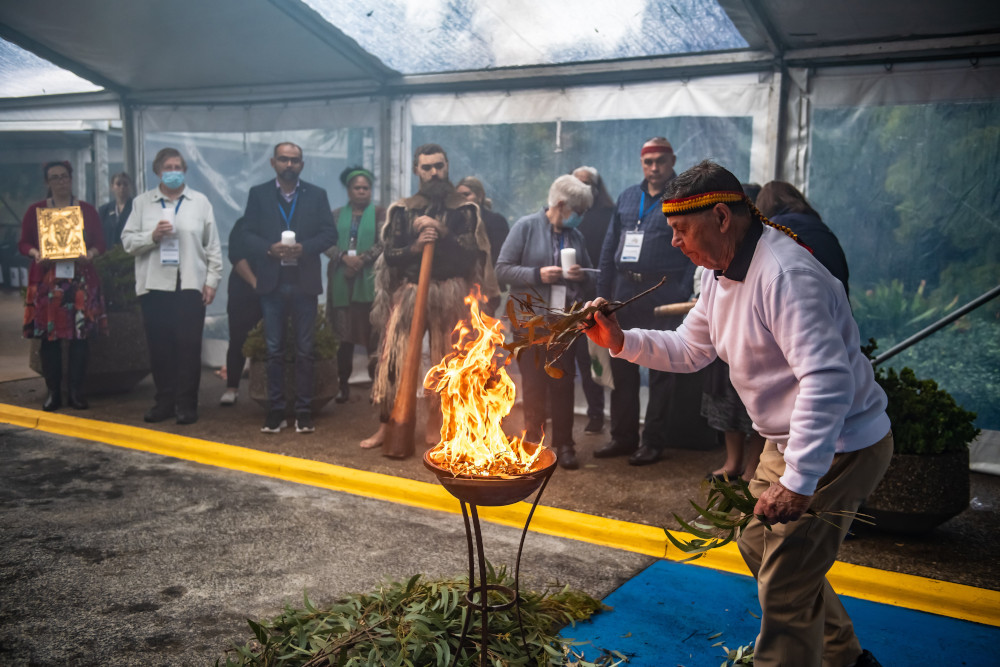 Despite persistent rainfall and wind, the first day of the Second Assembly of the Fifth Plenary Council of Australia opened in Sydney with an Indigenous smoking ceremony. (CNS photo/Giovanni Portelli, The Catholic Weekly)

Taking steps to address racism and abuse, the Catholic Church in Australia has officially endorsed the Uluru Statement from the Heart, which calls for a First Nations voice to Parliament to be enshrined in the nation's constitution.

In a separate action, the Plenary Council apologized formally to victims, survivors and families of child abuse and committed to a further investigation into the systemic factors that facilitated it within the church.

Members of the Plenary Council's Second Assembly, which endorsed the Uluru Statement, also committed to acknowledging "in a prominent and appropriate manner the traditional custodians of the land" in each diocese and eparchy.

The bishops' Commission for Liturgy and the National Aboriginal and Torres Strait Islander Catholic Council will consider Indigenous "symbols and rituals" for Catholic liturgies.

The assembly also apologized to Aboriginal and Torres Strait Islander peoples for "the part played by the church in the harms they have suffered" and committed to working toward "recognition, reconciliation and justice."

Aboriginal and Torres Strait Islander peoples are among those who have been abused in Australia, including by church officials and at church-run schools. In 2017, the Royal Commission into Institutional Responses to Child Sexual Abuse issued a 17-volume report documenting abuses, including in situations involving the church.

"As a Plenary Council, we recommit the Catholic Church in Australia to responding transparently, with justice and compassion, to those who have been abused, whether they approach the church directly or through the government's National Redress Scheme or through civil litigation," said the Plenary Council statement on abuse.

Local memorials for victims and survivors of child abuse will also be encouraged where appropriate, "as a tangible recognition of the harm done through abuse and the need for special care for children."

Commenting on the assembly's discussion on the Indigenous motions, Bishop Charles Gauci of Darwin, chair of the bishops' Commission for Relations with Aboriginal and Torres Strait Islander Peoples, said he thought the church was now heading in the right direction.

"It was very much about respect. It's about acknowledgment. It's about a journey that's continuing to unfold," he told The Catholic Weekly.

"What I brought up myself, specifically on behalf of the Northern Territory Aboriginal Catholic Council: Please don't make one size fit all when it comes to Aboriginal situations. We've got many nationalities, many traditions."

Between a quarter and a third of all Catholics in Bishop Gauci's diocese are Indigenous. In his ministry, he spends a significant amount of time listening to Aboriginal people and learning about their cultures and sense of spirituality.

In response to concerns from some Catholics about incorporating Indigenous symbolism in liturgical services, Gauci said the church has done this over the years in different cultures.

"Aboriginal people have no doubt that Christ is God, (or of) the supremacy of Christ, and that Christ brings everything to fulfillment.

"If we use some of their symbols for cleansing, what's wrong with that?" he said.

Members of the Plenary Council also participated in a communal "ritual of lament" for victims of child abuse, which involved the sprinkling of ashes on the body as a sign of repentance. Bishop Shane Mackinlay of Sandhurst, vice president of the Plenary Council, spoke about the liturgical ritual at the evening media briefing July 4.

"Mindful of how significant this was, and how important that we give it really serious weight, we decided to set it in a liturgical context, a prayerful context," Mackinlay said.

"Our discussion and discernment and voting on the motions was set in a lament.

"There was an extended and quite beautiful ritual that we began with, and then we had discussion interspersed with other periods of prayer, before voting, and then a longer period again at the end."

He described it as a "good model of how these things can be done."

More than 270 delegates -- bishops, religious and laypeople -- are participating in the Second Assembly. Rules for a plenary council are outlined in canon law, which determines who must be included as well as who may be included. The Australians sought permission to increase the number of laypeople, a spokesman for the Australian Catholic Bishops' Conference said before the First Assembly last October.

Later this year, Plenary Council acts adopted by the Australian bishops will be sent to the Vatican for approval. When those acts are approved by the Vatican, they will be implemented in Australia and be binding on Australian Catholics.