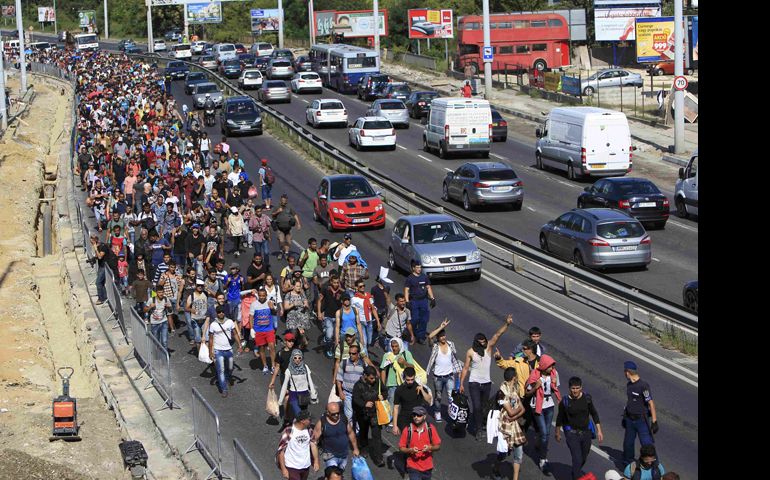 Migrants walk along a highway in Bicske, Hungary, near the border with Austria Sept. 4. (CNS/Bernadett Szabo, Reuters)

Vienna, Austria — Austrian Cardinal Christoph* Schönborn has called on all the bishops in the European Union to "find a common line" on the mounting crisis in Europe, where governments are struggling with how to respond to the tens of thousands of migrants seeking refuge in Europe.

"We expect the EU to find a common stance on the migrant issue so we may also expect a common line from EU bishops," Schönborn said Sept. 6.

He noted that the Council of European Episcopal Conferences, comprising the presidents of the bishops' conferences in the EU's 45 member nations, is meeting in the Holy Land Sept. 11-16. By the end of that meeting, Schönborn said, the European bishops should have a clear statement on the crisis.

The more than 20,000 refugees that crossed the Austro-Hungarian border within six days were mainly from Syria, Iraq and Afghanistan. The civil war in Syria, which began four years ago, has killed more than 220,000 people and displaced 7.6 million. Bombs have destroyed major cities, and there is a drastic shortage of food, water and medical supplies. More than 3 million Iraqis have been displaced from areas controlled by Islamic State militants and many others are threatened by militias. And Afghanistan has known nothing but war and conflict since 1978.

Schönborn made his call for episcopal unity as Pope Francis at the Vatican called on every Catholic parish and community across Europe to house at least one of the tens of thousands of refugee families.

"In front of the tragedy of the tens of thousands of refugees escaping death by war or hunger, on the path toward the hope of life, the Gospel calls us, asks us to be 'neighbors' of the smallest and most abandoned," Francis told the crowd gathered in St. Peter's Square for his weekly Angelus address Sept. 6.

Schönborn, archbishop of Vienna, has pledged to find accommodations for up to 1,000 migrants in his archdiocese.

On Friday (Sept. 4), more than 2,000 migrants set out on foot along the main highway from Budapest, Hungary, heading for the Austrian border — a trek of just over a hundred miles. They had been waiting at the main railway station in Budapest for days to board trains to Austria, but had been prevented from doing so by the Hungarian authorities.

Later that evening, Hungarian authorities sent buses to pick them up and drove them to the border. The migrants were deposited at the Austrian border late at night from where they had to walk into Austria in the pouring rain. They reached the frontier town of Nickelsdorf soaked to the skin late at night. Aid organizations and hundreds of volunteers welcomed them and made them comfortable for the night.

By Sunday (Sept. 6), more than 11,000 migrants arrived in Vienna from Nickelsdorf. Most of them went on to Germany, their preferred destination, by train.

Schönborn traveled to Nickelsdorf Saturday (Sept. 5) where he personally greeted migrants crossing into Austria from Hungary. Nickelsdorf was the site of a tragedy late last month when 71 migrants were found dead inside a refrigerator truck.

Schönborn had hosted a memorial Mass for these 71 migrants earlier in the week. During the memorial, he said the tragedy had "greatly shocked Austrians."

"That was when very, very many people in our country realized that the way refugees were being treated was intolerable," he said.

The outreach to migrants from ordinary citizens witnessed over the last few days "once again [shows] how cooperation and humanitarian commitment can defend European ideals and save lives," he said.

He cited Francis' criticism of the "globalization of indifference" on his visit to Lampedusa, Italy, and the pope's reminder that "we cannot look away."

Cardinal Reinhard Marx of Munich and Freising, and Lutheran Bishop Heinrich Bedford-Strohm of Bavaria were on hand to welcome the first batch of refugees to arrive in Munich by train from Austria.

"Everything must be done so that no one dies of thirst on borders, drowns in the Mediterranean or suffocates in trucks," Marx said. Money must not play a role when it came to saving lives, he said.

Referring to the 93.2-mile-long barbed-wire fence the Hungarian government has built along its southern border to prevent migrants from crossing into Hungary from Serbia, Marx said that building fences was "unacceptable." It would not prevent people from dying, he said, but would rather "provoke new dramatic incidents."

"The Catholic church and all of us bear a special responsibility here," Marx said.

Bishop Miklos Beer of Vac in northern Hungary has deplored the Hungarian church's silence on the government's refugee policy.

"Unfortunately, the [Hungarian] church is silent. That hurts and I am ashamed," he told the German radio station Deutschlandfunk. "We are reacting far too slowly — unlike Pope Francis. He reacted very quickly."

Beer said that the very day Hungary announced it intended to erect a border fence, Francis issued an appeal, saying, "Don't build a wall. Refugees are your brothers and sisters."

The bishop said he could understand that ways must be sought "to restrict the flow of refugees somehow so that we can cope with the situation," but he deplored the lack of dialogue in the Hungarian church.

According to church officials, Hungarian laws on human trafficking has prohibited church action on the migrant issue, but Cardinal Peter Erdö of Esztergom-Budapest has said church members can help migrants "discreetly."

At Hungary's famous Benedictine Abbey of Pannonhalma, Archabbot Asztrik Varszegi and his monks have defied the law by taking in several Syrian families and a number of unaccompanied minors who were walking to the Austrian border along the motorway at night.

"We must not leave anyone standing at our doors, as that would be against the Gospel message," Varszegi said. Pannonhalma has a long tradition of helping refugees, including sheltering Jewish refugees in the last days of the Second World War.

*An earlier version of this story misspelled Schönborn's first name.

What is going on with US bishops' ministry to migrants and refugees?

Reflections on Austria, a Catholic nation