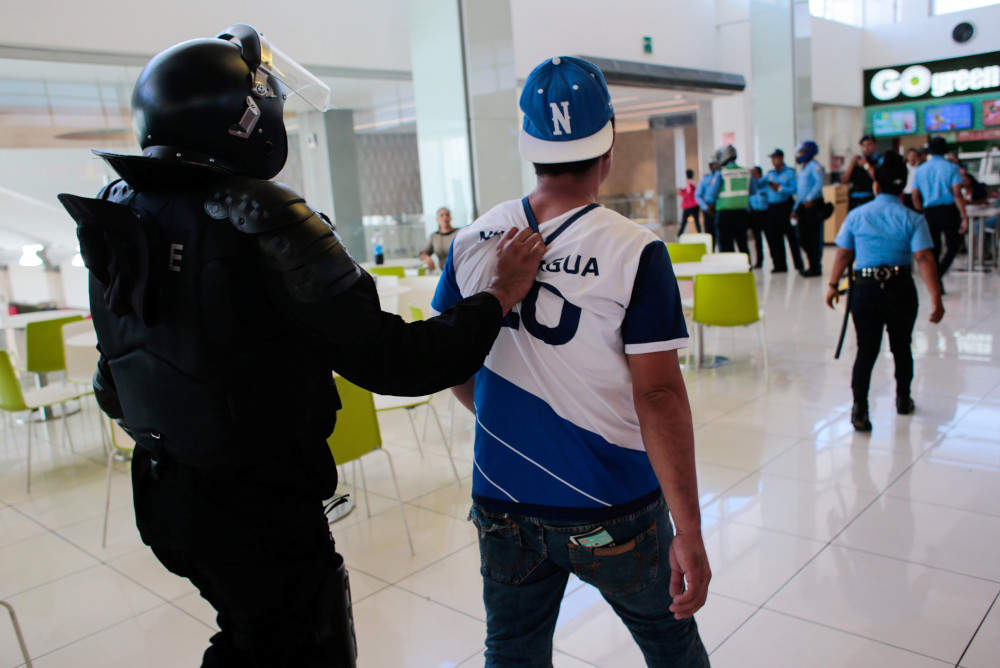 A protester is picture in a file photo being detained during a demonstration against Nicaraguan President Daniel Ortega's government in Managua. The Nicaraguan government has closed another Catholic radio station, and a report says Catholic young people were detained from a parish. (CNS photo/Oswaldo Rivas, Reuters)

Nicaraguan authorities have ordered the closure of Catholic media outlets and raided a parish in the Diocese of Matagalpa, the latest attack on the Catholic Church by the Sandinista regime.

Police entered the Infant of Prague chapel in the community of Sébaco Aug. 1 to seize radio equipment, prompting parishioners to protest outside. Police rebuffed the protests and fired gunshots in the air as church bells rang, according to video posted to social media by the Divine Word parish. The parish also posted a video showing police taking away "young people from our Catholic groups."

"We call on the national police to abandon our installations, which belong to the Catholic people," the parish said in a Facebook message at 6 a.m. Aug. 2. A message earlier at 1:20 a.m. said the "police are removing the kitchen door to the parish residence." Another message asked the Immaculate Heart of Mary for intervention.

Fr. Uriel Vallejos, pastor, posted photos of the police entering the chapel -- breaking locks to do so. He also posted a letter from the authorities saying Radio Católica de Sébaco was operating without a valid license and "therefore operating illegally."

In an Aug. 1 statement, the Diocese of Matagalpa said communications regulator TELCOR had ordered the closure of its Catholic radio station for similar reasons, saying it had operated without a valid license since 2003. The diocese disputed that claim, saying Bishop Rolando José Álvarez of Matagalpa "personally submitted documentation" to TELCOR in June 2016.

"We will continue to report and denounce any situation that, like this one, continues violating the freedom of expression and religion in Nicaragua," the statement said. "We invite the people of God to continue praying," the statement added, praying for the protection of priests Aug. 4, feast day of St. John Vianney, followed by a day of prayer and fasting Aug. 5, "because only prayer will save Nicaragua."

The administration of Nicaraguan President Daniel Ortega has been treating the Catholic Church as an enemy, with priests arrested and media outlets closed. Catholic leaders have been cautious in the comments as the repression is ramped up and the regime targets church charitable and educational initiatives.

The government ordered the Missionaries of Charity to leave the country in late June, alleging the order founded by St. Teresa of Kolkata "failed to comply with its obligations." The sisters officially left Nicaragua July 6, crossing the border into neighboring Costa Rica.

Auxiliary Bishop Silvio José Baez of Managua is currently based in Miami due to safety concerns.