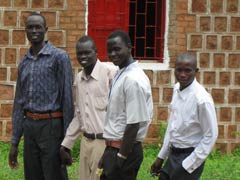 Students on the Wau campus of the Catholic University of Sudan

TENAFLY, N.J. -- When Americans think about Sudan -- if they ever do -- they may connect it with some 20 years of civil war, with hunger, refugees and genocide -- especially in Darfur, its northwestern province. Or they may associate it more recently with large oil finds in the south of the country or with the peace agreement of 2005, which has brought an unsteady cease fire to warring factions of the North and South.

But not all news from Africa’s largest nation -- roughly the size of the United States east of the Mississippi -- is bad news. In recent months the Catholic University of Sudan has opened two small campuses, with the help of two American missionaries.

The faculty of arts and social sciences was launched in 2008 in Juba, capital of the southern region. Already, 250 students are enrolled.

In 2009 a second faculty of agricultural and environmental sciences opened with some 50 students in Wau, capital of Bahr el Gahzal. A third faculty of engineering sciences is planned for next year.

“The Catholic University of Sudan as a national institution is a dream long deferred,” said its vice chancellor, Jesuit Fr. Michael Schultheis. He said the Sudan Catholic Bishops’ Conference has wanted a Catholic university since Sudan gained independence from Britain in 1956. In 1983 Sudan’s then President Jaafar Nimeiri spoke to Pope John Paul II about it when he visited Rome.

But the initiative was soon scrapped when Nimeiri and his military government, in an effort to win support among the northern elites, applied Shariah law nationwide and tried to impose the Arabic language and Islam on the South -- a largely non-Arab, non-Muslim region. Protests by southern Sudanese sparked a return to civil war, which killed an estimated 2.5 million southerners and displaced 4.5 million.

The bishops view the new university as the centerpiece of their plans to help Sudan recover from decades of violence, famine and the mass displacement of people, Schultheis told NCR in an e-mail interview. The bishops recognize that the church is called to assist at every level in building the new Sudan. They view it as a place to train personnel with the skills and expertise to manage and provide the basic services the nation desperately needs, he said.

The founding of the university comes at a historic moment as the nation prepares for a critical referendum in 2011 to decide if Sudan stays united or becomes two countries. “Sentiment in the South seems to be overwhelmingly for independence,” Schultheis said, “as the northern elite is far from making unity attractive for the South.”

The chance to study farming, husbandry, food and environmental security in a rural setting like Wau is important for area students who inhabit a rich agricultural plain, but whose land has often proved nonproductive due to war, drought, and a lack of modern farming methods and tools of production, said Maryknoll Fr. Tom Tiscornia.

Tiscornia, 66, will be assisting Schultheis, 78, in administration of the Wau campus, as well as teaching English -- the language of the new school. Together the pair have worked almost 75 years in Africa, but this is their first time working in tandem.

Schultheis hails from Washington state while Tiscornia grew up in Tenafly, N.J., where NCR spoke with him during a home visit in August.

Tiscornia, who was regional superior of Maryknoll in Africa from 2001-2007, previously served in the Nuba Mountain region of Sudan.

“It’s great to be at the beginning of something,” said Tiscornia. “I love the newness, the excitement and the vision” that the university can offer students in a nation where some 40 percent of the 40 million inhabitants are illiterate and where just half of Sudan’s children attend primary school and only a third go to high school, he said.

The Wau campus consists of three buildings, all previously used by the military, then by squatters when forces withdrew in 2005. “The students are a mixture of ethnic groups, which for sure models the kingdom and hopefully the future Sudan,” Tiscornia said. Faculty members are mainly coming from the nearby University of Bahr el Gahzal.

Schultheis said students at both campuses have to find their own food and housing -- not an easy task, he added, in a land where the average wage is $1 a day. With tuition costs at 2,000 Sudanese pounds per year (US$800), the priest has had to seek funds both in and outside Sudan.

Cordaid of the Netherlands and Catholic dioceses and associations in Germany have contributed 120,000 euros ($170,000) to help launch the university and provide scholarships. The new schools in Juba and Wau received help in the preparation of building plans from Gonzaga University in Spokane, Wash. Gonzaga’s students shipped 20,000 books and 10 reconditioned computers to the university library.

Schultheis credits a generous donor and the efforts of Catholic Relief Services in Nairobi, Kenya, for getting the books overland to Juba. A 40-foot shipping container has been acquired, remodeled and now represents “probably the best container-library in Africa,” he said. A second container of books should arrive early next year.

Through Schultheis’ efforts, the new institution is cooperating with the Catholic University of East Africa in Nairobi and the Uganda Martyrs University in Nkozi about areas of support and possible affiliation.

Tiscornia credits Schultheis with enhancing Catholic higher education across Africa. During his four decades on the continent, the Jesuit has worked at Makerere University in Kampala, Uganda, and the University of Dar es Salaam in Tanzania. In the 1990s he taught economics at the Catholic University of Mozambique, established its first graduate degree and founded a research and documentation center.

The Jesuit became the first president of the Catholic University of Ghana in 2002, where he remained until coming to Juba. His graduate degrees in theology, philosophy and economics, as well as his Cornell doctorate, which focused on international agricultural development, have been huge assets for the new campuses in Sudan, Tiscornia noted.

While the Catholic University of Sudan is open to students of all religions, the vast majority is Christian and at least 70 percent is Catholic, Schultheis said, noting that Juba has one Muslim student and two Muslim instructors. Wau also has a Muslim teacher. “Perhaps more Muslim students will surface in the first year. They are welcome.

“But I make no apologies that we are a secular institution, but Catholic in character,” he said. “As long as I am here, we by design are educating Catholic/Christian young men and women.” The Catholic University of Sudan is a response in some sense to the planned “destruction of southern Sudanese communities by northern elite/Muslim fundamentalists,” Schultheis said.

Schultheis said the new university is a Sudanese institution “already on the ground.” Though its seeds are still being sown, “it’s on its way to becoming firmly rooted in the life of the Catholic church and the wider society in Sudan and South Sudan,” he said.

“The baby is born! And what will the baby become? Aye, that is the question,” he mused.

Ireland against the churchís larger backdrop