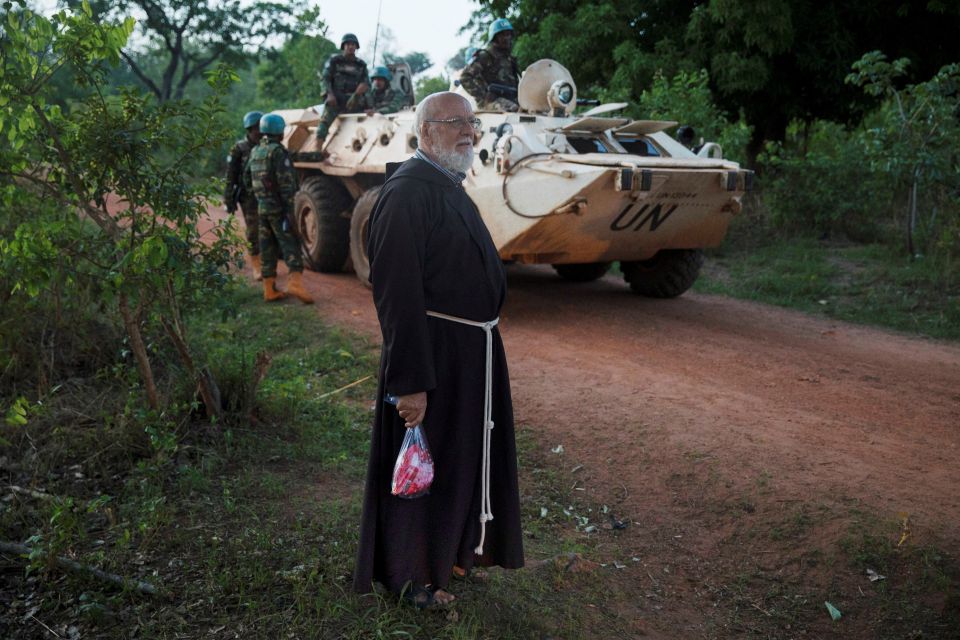 A Franciscan stands near U.N. peacekeeping soldiers in 2017 in the village of Ndim, Central African Republic. the nation's Catholic bishops urged international peacekeepers to act more effectively and condemned attacks on churches and the "manipulation of religious feeling." (CNS/Baz Ratner, Reuters)

The bishops criticized "certain peacekeeping contingents, against their proper mandate, and the culpable, complicit silence of elected politicians."

"Armed bands are still fueling anarchy and imposing their rules on exhausted civilian populations, who no longer know where help will come from," the bishops said in a four-page appeal. "In our dioceses, we witness this sad reality every day and deplore how our country remains in the grip of thugs."

The appeal was published after a bishops' plenary, which ended Jan. 14 with a cathedral Mass attended by President Faustin-Archange Touadera and the country's chief imam, Oumar Kobine Layama.

It said the Catholic Church acknowledged efforts to secure stability by appointing local prefects, paying official salaries and establishing a special penal court, as well as through a development plan backed by the United Nations, World Bank and European Union.

However, it added that the country was still terrorized by violent groups and a lack of cooperation between government forces and the U.N. military mission, MINUSCA.

"Villages are vandalized and torched, their inhabitants tortured and killed without shame," said the appeal, co-signed by the bishops' conference president, Cardinal Dieudonne Nzapalainga.

"We regret the slowness and inaction of certain MINUSCA contingents in their peacekeeping role. While our population ardently desires the redeployment of our own defense and security forces, some elements of these forces are now racketeering just as much as the armed groups."

"In the name of God, we ask armed groups to lay down their arms, without untenable conditions, and end the crimes and sufferings," the message said.

Speaking at the plenary, Nzapalainga said 2017 had brought attacks on Catholics in Bangassou, Alindao and Mokoyo, with churches "devastated, looted and burned." He said the only solution was "to love and unite as Central Africans."

In their message, the bishops condemned the Jan. 4 stabbing of a priest, Msgr. Alain Blaise Bissialo, at Bangassou's Christ the King Parish, and the intimidation of Catholic pastors.

They added that nearly 3,700 young Catholics had sought shelter in the cathedral at Alindao, while others had been subjected to "all kinds of violence," including sexual abuse and forced recruitment by armed bands.

"We denounce the profanation of religious sites and sacred objects," the statement added.

"We also condemn the manipulation of religious feeling by persons pretending to be gurus with solutions to every problem, and the resignation of certain religious leaders from their mission as peace builders."

The appeal was circulated as violence flared around Paoua, where 60,000 people have sought refuge in local churches after fleeing fighting for territory between rival groups.

Speaking Jan. 16 in Bangui, Peter Maurer, president of the International Committee of the Red Cross, said "rapidly degrading" humanitarian conditions had left half the country's inhabitants in need of international assistance, the highest ratio since 2013.