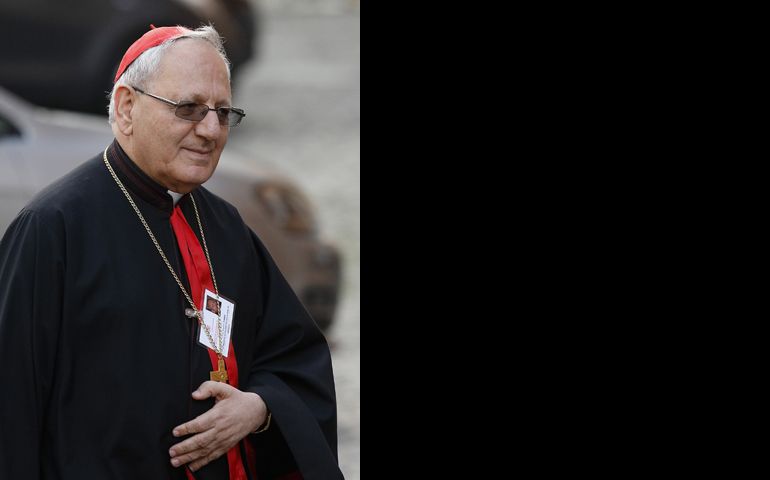 Chaldean Catholic Patriarch Louis Sako of Baghdad, Iraq, is seen at the Vatican in this Oct. 16, 2014, file photo. (CNS/Paul Haring)

Baghdad — Chaldean Catholic Patriarch Louis Sako of Baghdad called for reconciliation and an end to all forms of extremism at an interfaith gathering he hosted in the Iraqi capital to pray for peace in Iraq, Syria and in the wider Middle East.

Speaking to Christians, Muslims, Yezidis and Mandaeans as well as ambassadors and members of Iraq's parliament assembled May 30 at the Queen of the Rosary Church, the patriarch said the gathering represented "an opportunity to correct perceptions, relationships and choose the way that leads to peace, reconciliation and building of mutual trust."

"As we are in charge of humanitarian and religious responsibilities amid these tragic conditions, we are all called, in the presence of God, to move quickly to unify efforts of spreading the culture of tolerance, love, peace and friendship and to deepen the values of belonging to this multicultural nation," the prelate told the gathering.

Sako urged people to avoid "all forms of extremism," reminding them that "the heavenly laws of all religions plea to establish justice among people" without oppression and discrimination.

"We have had enough of wars. The Iraqi people are tired of hearing about death, destruction, and displacement on a daily basis, all of which are against the divine will," he said.

The patriarch pointed to the importance of the timing of the event, during "the Jubilee Year of Mercy, proclaimed by Pope Francis, and because Ramadan is around the corner, in which our fellow Muslims fast, pray, repent, and live 'compassion and kindness' toward those who suffer."

The patriarch also noted that celebrating the (eve of) the Visitation of the Blessed Virgin Mary "in these difficult circumstances is an invitation for every one of us to follow her example of faith, openness, love, service, pureness, patience, hope and confidence."

Sako stressed the importance of praying "in the midst of such a critical situation and the suffering of our people in Iraq, Syria and the region," expressing his hope that "miracles can happen" for a true peace.