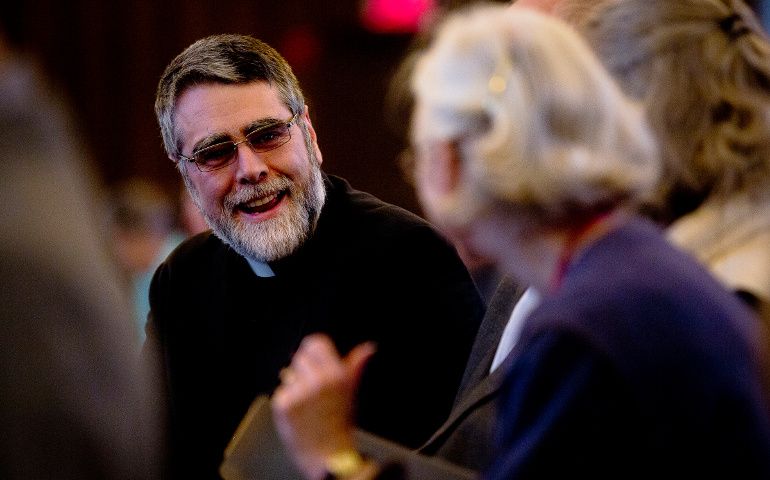 U.S. Chaldean Bishop Francis Kalabat chats with an audience member prior to the start of a a panel discussion about the survival of Christianity in the Middle East at The Catholic University of American in Washington Nov. 17. (CNS/Tyler Orsburn)

Declaring that the persecution of Catholics and other Christians in Iraq and the Middle East is genocide must be followed by action, said Bishop Francis Kalabat of the Eparchy of St. Thomas the Apostle, based the northern Detroit suburb of Southfield.

"We need to proclaim, 'This is genocide,' and then do something about it," Kalabat said. "When we do that, then we can set up courts and set up programs to deal with the physical trauma, the emotional trauma and the spiritual trauma."

The bishop made his remarks during a Nov. 17 talk at The Catholic University of America and in an interview with the Catholic Standard, newspaper of the Washington archdiocese.

In March, U.S. Secretary of State John Kerry said that atrocities carried out by the Islamic State group against Yezidis, Christians, Shiite Muslims and other minorities were genocide, the first U.S. declaration of genocide since Sudanese actions in Darfur in 2004. However, the genocide finding does not legally obligate the U.S. to take any particular action.

Kalabat has headed the Michigan-based eparchy since 2014. Its jurisdiction includes Chaldean Catholic parishes in the Detroit area, in Illinois and several Eastern states. The Chaldean Catholic community in the United States is one of the largest in the world.

Kalabat's eparchy has 10 parishes in the Detroit metropolitan area. Many immigrants from the Middle East have been drawn to Detroit to work in the auto industry.

"We are trying to maintain who we are," Kalabat said. "We want to praise Jesus using the language and the customs with which we first encountered Him."

Kalabat noted that Chaldean Catholics "have a profound and rich history and if that history does not connect to us today, then it is nothing more than a memory."

He said "Christianity in the Middle East has had so much life, but it is now being destroyed in Iraq, Syria and the other countries of the 'Arab Spring.' "

The Arab Spring — a 2011 series of protests and uprisings in several Middle Eastern countries — resulted in political power being gained by groups such as the Islamic State of Iraq and Syria, or ISIS, and the Society of the Muslim Brothers, also known as the Muslim Brotherhood. Both groups have led a campaign against Christians, including murder, beheadings and rapes and looting and destroying churches.

"If that is the spring, I'd hate to see the winter," Kalabat said. 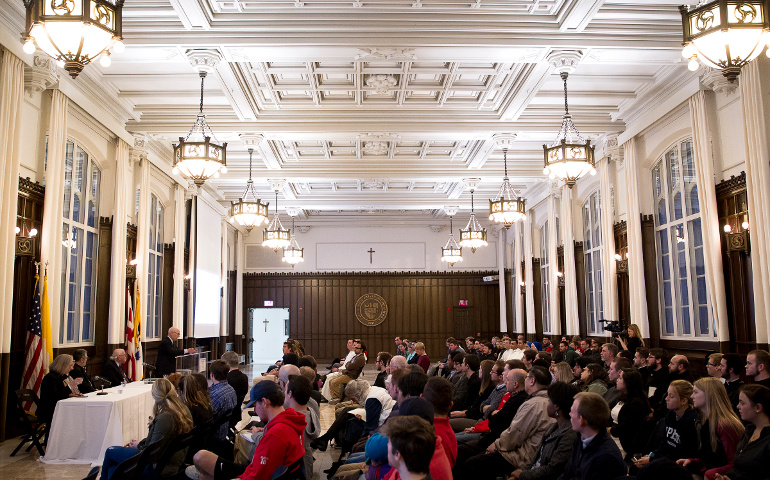 Audience members at The Catholic University of America in Washington listen to a panel discussion about the survival of Christianity in the Middle East Nov. 17. (CNS/Tyler Orsburn)

The Islamic State, he said, "did a lot of destruction. They not only destroyed buildings, but they destroyed relations between neighbors. Many (Iraqi Muslims intimidated by Islamic State) turned in their Christian neighbors and that has built up a lot of mistrust."

The systematic persecution of Christian communities in the Middle East "is the purposeful destruction of a culture, a faith, a human history and a human person," the bishop said.

Kalabat said there are certain regions of Iraq "where you're told you have 24 hours or less to get out or you will die. Imagine — you build up a life and in almost the blink of an eye you lose everything."

Kalabat spent the month of September in Iraq and "had the real opportunity to see Christians in Iraq — and not just Christians but all Iraqis — alive and in pain and suffering."

He said daily life in Iraq is marked by a lack of trust in the government, bombings and other acts of terrorism that unsettle and destabilize the population, lack of jobs and educational opportunities and harsh living conditions such as limited electrical power.

He also noted that some Catholic communities in Iraq have not had Mass said for them for as long as seven years.

Kalabat said Sako "has met with officials and is working very hard to bring rights not just to Christians, but to all Iraqis."

He noted that not all Muslims are persecuting Christians and that there are many "who want a democratic, free and peaceful Iraq." Those Muslims "working hard to protect Christians," he said, "are heroes. They are our friends."

He said the Chaldean Catholic Church in Iraq "is very active and it is active with all Iraqis. We respond with love and compassion. We do no always get that in return, but when we do it is magnificent."

Noting there is "a massive exodus of Christians from biblical lands and profoundly historical lands," the bishop said that for someone to tell persecuted Christians to stay "is not real, is not fair and is not practical."

"If — God forbid — every Christian left Iraq, what would happen? Let's pray and let's work and let's rebuild so that doesn't happen," he said.

He called on U.S. Catholics to become aware of the suffering of Christians in the Middle East and to pray for them. He also urged them to talk to members of Congress and the new Trump administration "and tell them what we need and that we need it now.'"

Because the Islamic State has threatened to "humiliate Americans everywhere and raise the flag of Allah in the White House," Kalabat said Americans must never forget that "ISIS isn't just 'their' problem. It is a problem for all of us."

He said Catholics in the West also can "adopt parishes, adopt dioceses and adopt people" and assist them "to let the people there know that the people here are thinking of them and praying for them and thanking them for keeping the faith alive." 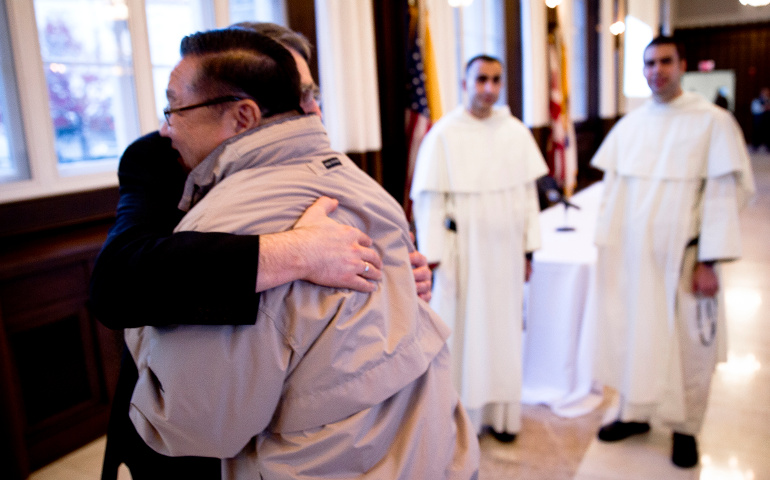 Mosul offensive has some Iraqis hopeful, but aid groups have concerns