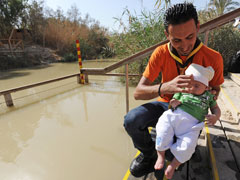 Palestinian Catholic Bishara Michael makes the sign of the cross on his son, 3-month-old Gabriel, during an annual Franciscan-led pilgrimage to the Qasr el-Yehud baptism site by the Jordan River in October 2010. (CNS/Debbie Hill)

LONDON -- By now, the threat facing Christianity in its birthplace is depressingly clear. Christians represented 30 percent of British Mandate Palestine in 1948, while today in Israel and the Palestinian Territories they’re 1.25 percent. The Catholic patriarch of Jerusalem, Fouad Twal, warns that the Holy Land risks becoming a “spiritual Disneyland” -- full of glittering rides and attractions, but empty of its indigenous Christian population.

That decline is part of a Christian exodus all across the Middle East, the reasons for which are well-known:


Yet even when the big picture is familiar, its details still pack emotional punch.

Raphaela Fischer Mourra, daughter of a German father and Palestinian mother, was born and raised in Bethlehem. In 2000, at the age of 15, she lost her father to an Israeli missile attack as he raced to rescue neighbors; she describes him as “the first Christian martyr of the Second Intifada.” Samer Makhlouf, a 35-year-old raised in a Christian village on the West Bank, was arrested by Israeli troops at 15 for tossing a stone. He was detained for four months, he says, interrogated and tortured. Another Palestinian Christian, Jacoub Sleibi, says his family is forced to haul water to their home in Bethlehem, while fresh water flows abundantly through nearby Israeli settlements.

Illustrating that no one has a monopoly on pain, there’s Rabbi Daniel Sperber of Bar-Ilan University in Tel Aviv, who describes scraping bone and skin out of burned Israeli tanks to make DNA identifications, calling it the sort of tragedy “that has touched every Israeli family.” His children have been afraid to get on the school bus, he said, worrying that it might blow up.

These were among the voices at a conference on Christians in the Holy Land in London July 18-19, cosponsored by the Anglican Archbishop of Canterbury, Rowan Williams, and the Catholic archbishop of Westminster, Vincent Nichols. Held at Lambeth Palace, the spiritual headquarters of Anglicanism, the event aimed to raise “literate, compassionate awareness” of the Christian plight.

Yet awareness is the easy part. Knowing what to do is harder, because the situation is maddeningly complex.

Palestinian Christians insisted that the factors fueling their exodus -- political discrimination, lack of employment, restrictions on freedom of movement -- are fundamentally the result of the Israeli/Palestinian conflict.

Access to holy sites is one difficulty. Palestinians in the West Bank and East Jerusalem have different residency cards, and movement back and forth requires a permit that’s hard to obtain. Christians in Bethlehem often cannot cross the roughly six miles to Jerusalem to worship at the Church of the Holy Sepulcher.

Residency policies also divide families. Reportedly, there are some 200 Christian families split between the West Bank and Jerusalem.

The 1993 “Fundamental Agreement” between Israel and the Vatican, designed to regulate the legal status of church properties, is another frustration. The Knesset has never acknowledged the deal, and in the meantime, Israeli has declared Christian sites such as Mount Tabor and Capernaum to be national parks.

On the other hand, several speakers argued that as the lone democracy in the region, Israel gives Christians a better break than elsewhere.

Sperber said that more than 50,000 Christians have settled in Israel from the former Soviet Union, and others are arriving from the Balkans and Asia. As a result, he said, “the churches are full in Tel Aviv and Haifa” and in Jerusalem.

Sperber said there is also a “tremendous upsurge” in Christian pilgrimage -- so much so, he said, that his neighbors struggle to leave their houses because narrow alleyways are packed with Christian tourists.

As a result, Sperber said, there is a Christian “renaissance” in Israel.

Bernard Sabellah, a Christian academic and a member of the Palestinian Legislative Council, differed.

Enthusiasm coursed through the gathering about the Arab Spring, and the vision of pluralistic, democratic societies that animates its young protagonists.

The Anglican bishop of Jerusalem, Suheil Dawani, said the Arab Spring demonstrates that “the people are demanding to be heard,” and that as Arab Christians, “we join our Arab brothers and sisters.”

Sabellah said the uprisings mean the majority of Arabs want to live “in an open, preferably secular, democratic society.” That’s especially true, he said, for Christians.

“I have no problem with Islam, but I want to be a citizen, not a tolerated minority by a gracious act of Israel, or Assad, or Abu Mazen, or the King of Jordan,” he said.

Yet some Christians are ambivalent, wondering if the Arab Spring will deliver on those heady promises.

“I look at it with great hope, but also great worry and fear,” Makhlouf said. “The future is not clear. ... What’s next? Is it the Muslim Brotherhood? More Islamic regimes?”

U.S. Cardinal Theodore McCarrick said he recently returned from Gaza, where the elderly voiced worries. “They’re afraid of Hamas, and they’re afraid of the Arab Spring,” he said.

Conservative British Member of Parliament Tony Baldry said he recently visited Egypt, where he met Coptic and Catholic leaders who “are not optimistic.” Christians, he said, worry that “by next year, the Muslim Brotherhood will be in control of the military.”

There’s much to applaud in the Arab Spring, but it’s also naive, as Baldry put it, “to think that every change is necessarily for the better.”

There was a palpable sense that the region is moving toward fresh disaster -- perhaps a new intifada, or a new war in Lebanon, or new conflict between Al-Fatah and Hamas. A September vote on Palestinian statehood in the United Nations could unleash conflict.

Some suggested that the right approach to aiding Christians is to focus on grass-roots initiatives, ignoring the bleak political landscape.

“We are not sitting by the wayside waiting for politicians or anyone else to create a path to peace,” Dawani said.

In the end, a both/and approach seemed to prevail -- small-scale initiatives as confidence-building measures, while pursuing political breakthroughs.

Sabellah stressed the importance of focusing on practical matters such as residency, housing, and freedom of movement, which could be resolved even in the absence of a comprehensive peace deal. “Lofty dialogue will get you nowhere,” he said. “Let’s not waste effort.”

British cardinal: some media foster 'climate of fear' against migrants