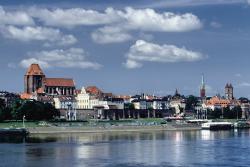 A view of the old town of Torun, Poland (ZUMA Press/Olivier Blaise)

TORUN, POLAND -- This medieval city in central Poland is a split-screen picture of the wider country. On one side of the city is Radio Maryja with its daily rants about the threat that Jews, gays and the liberals in the European Union pose for Poland. Across the Vistula River, less than 2 miles away from Radio Maryja, is the Higher School of Hebrew Philology founded by a Franciscan monk. Here Catholic students learn Hebrew and study about the Jewish origins of Christianity in the hope that this will bring both faiths closer.

The sharp contrasts between the nation’s progressive youth and the far-right Catholic radio station with millions of loyal listeners is evident in this city of 200,000, known as the birthplace of the astronomer Nicolaus Copernicus.

A crucifix hangs on the back wall of the classroom at the Higher School of Hebrew Philology. Beneath it stands a menorah -- an unusual sight in this predominantly Catholic country.

The new three-year private college that opened last October offers a program that is unique in Poland. The school’s purpose is to teach Jewish subjects, including Hebrew, Yiddish and the history of Judaism. There are no Jewish students in the school.

Fr. Maksymin Tandek, 43, the school’s founder, realized a lifelong dream in 2000 when he was given permission to study at a Franciscan school in Jerusalem for three years.

“When I stood on the rooftop of our school in the Old City, I fell in love with Israel and did not want to leave it,” he told NCR. “I felt honored that I could touch the roots of our religion and cultural identity when I was in the Holy Land.”

He said that when he returned to Poland, he was determined to find a way to share his love for Israel with young Poles. He wanted to teach them the importance of dialogue between Christians and Jews in the hope of countering anti-Semitism.

A glaring example of such anti-Semitism was heard last year when Dr. Kzysztof Kawecki, a priest, said on Radio Maryja that the boycotting of Jewish stores between the two World Wars was justified. “It was a necessary defense against an alien competition,” the priest said.

Tandek believes bigotry is often bred by ignorance, and he opened his school to combat this ignorance. Most Poles have minimal contact with Jews, mainly because there are so few, roughly 15,000 Jews in Poland’s population of 38.5 million.

Before the Holocaust there were 3.3 million Jews in Poland. Approximately 3 million perished in the Holocaust, and most of the survivors fled because of postwar anti-Semitism. Only two Jews remain in Torun.

“Now, after the Holocaust, Jews and Poles know even less about each other,” said Szymon Spandouski, a journalist who often writes about Jewish-Christian relations for the Torun newspaper Nowosci.

Tandek’s school is helping to close this gap for the generation of young Poles who have come of age since the collapse of communism in 1989. This generation is the first in the postwar period to learn about Poland’s rich Jewish history and to learn the unvarnished truth about the decimation of this population during the Holocaust. Communist textbooks referred to Jewish victims as anonymous “Polish citizens” and downplayed the Shoah.

Upon his return from Israel, Tandek launched a campaign to establish the school he envisioned. His project had the blessing of the Vatican and the Polish Catholic church, and he secured the support of the Torun City Council. The school receives funding from the city of Torun, the European Union and private contributors.

Makeshift quarters in the Franciscan monastery have only permitted the Hebrew school to accommodate 20 students during this freshman year. A new school building, near completion next to the monastery, will permit a large expansion of the student body in the fall term.

“I felt that I was missing something in Christianity and I wanted to go back to its roots,” said student Anna Turczanik. “Now I am beginning to understand Christianity’s connection to Judaism, and I am finally seeing my religion’s beginnings in Judaism.”

Paulina Przyziolkowska, another student, wants to be able to translate into Polish Yiddish stories that were written during the Holocaust.

“A whole Jewish culture disappeared from this country during the Holocaust,” a male student observed. “It is our obligation to find out why.”

Across the river Radio Maryja broadcasts a starkly different message. Its largely religious programs reach millions of Poles. Redemptorist Fr. Tadeusz Rydzik, Radio Maryja’s director and founder, figures prominently in Polish politics because he can often deliver the votes of his loyal followers.

His listener-supported media empire, under the auspices of the Warsaw province of the Redemptorists, includes a television station and a daily newspaper, Nasz Dziennik.

According to the Center for Public Opinion Research, an independent Polish public opinion center, 15 percent of Poland’s adult population, approximately 4.5 million, listens to Radio Maryja daily. Other researchers say the number is lower, but large enough to have considerable political influence.

Rydzik is a staunch supporter of the country’s right-wing parties, especially the Law and Justice Party, which shares leadership of Poland with the pro-business Civic Platform Party. Law and Justice officials often appear as guests in the Radio Maryja studios.

Rydzik’s programs exploit listeners’ fears that Poland’s new capitalist democracy undermines their traditional Catholic way of life. Jews and Masons are viewed as threatening outside forces to be demonized, according to a source close to the radio station, who requested anonymity because of her sensitive job.

The press is also demonized. Radio Maryja declined a request for an interview with Rydzik for this article, calling the proposed questions hostile. “All journalists are refused admission,” said Jacek Holub, a reporter who covers the Torun region for Gazeta Wyborcza, Poland’s largest newspaper.

Polish leaders in the Catholic church have criticized Radio Maryja for meddling in politics. They have called on the nation’s bishops to replace Rydzik with a new governing board for the station.

“It is absolutely necessary to do this to avoid a dangerous crisis in the church,” said Cardinal Stanislaw Dziwisz of Kraków.

But the Polish bishops have been badly divided and have failed to remove Rydzik.

“Those who oppose Rydzik are afraid to act against him because of his power and the support of so many of his devout Catholic followers,”said Holub.

Nevertheless, there are many people in Poland like Tandek who remain undaunted by the forces of prejudice. They quietly build citadels of understanding for the 1,000-year Jewish presence in Poland and hope to revive it.

“We apologize for Radio Maryja,” says graffiti on several buildings.

If you can train for war, you can also train for peace