A consistent ethic of life, Africa-style 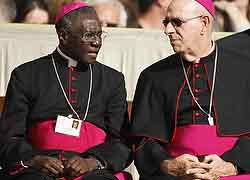 Archbishop Robert Sarah, left, secretary of the Vatican Congregation for the Evangelization of Peoples, talks with Bishop Larry Silva of Honolulu Oct. 7. (CNS)

Though this is perhaps a terrible over-generalization, Catholics in the United States and Europe sometimes fall into the trap of listening to only half of what the African church has to say. When African Catholic leaders condemn poverty, war, and racial injustice, Western liberals cheer; when those same Africans decry abortion and homosexuality, conservatives feel validated.

The hard truth for both left and right, however, is that African Catholics often don’t fit into Western ideological categories. They can be ferociously traditional on matters such as sexual ethics, and yet remarkably progressive in areas such as economic policy and ecology.

If a label is needed for all that, one might it call “a consistent ethic of life, Africa-style.”

So far during the Oct. 4-25 Synod for Bishops, much of the talk has been congenial to the Western left -- protesting the injustice of trading relationships and exploitation of natural resources by multi-national corporations, lamenting the continent’s wars, praising ecumenical and inter-religious dialogue, and calling for various sorts of internal church reforms.

Yesterday and today, however, the other half of the African soul found its voice.

At least four speakers offered a ringing defense of traditional African understandings of the family, general roles, and sexuality. In the same breath, they blasted what they see as the pernicious influence of Western non-governmental organizations (NGOs) in pushing a socially liberal agenda on the continent.

First up yesterday was Archbishop Robert Sarah of Guinea, currently serving in Rome as the secretary of the Congregation for the Evangelization of Peoples (better known as “Propaganda Fidei”), the Vatican’s main office for missionary efforts.

Sarah condemned a Western “theory of gender” which he said is trying to push Africa “to write laws favorable to … contraceptive and abortion services (the concept of ‘reproductive health’) as well as homosexuality.”

All this, Sarah said, “is contrary to African culture and to the human truths illuminated by the divine Revelation in Jesus Christ.” Africa, he said, “must protect itself from the contamination of intellectual cynicism in the West.”

Today, three other speakers picked up the theme.

Archbishop Joseph Tlhagale of Johannesburg, president of the South African bishops’ conference, asserted that Africa is “under heavy strain from liberalism, secularism and from lobbyists who squat at the United Nations.”

“Africa faces a second wave of colonization,” Tlhagale said, which is “both subtle and ruthless at the same time.”

“Our African human and religious communities, on a whole, reject the legal practices of many otherwise Christian Western countries, such as abortion, homosexuality, same sex marriages, euthanasia,” he said. “They respect the promotion of values relating to family and life.”

Ouédraogo asserted that Western media “deliberately broadcast programs that try to impose Western society’s thought” upon Africa. He styled international coverage of Pope Benedict XVI’s mid-March trip to Cameroon and Angola as part of that effort; much reporting abroad was dominated by the pope’s comments about condoms and AIDS, suggesting that condoms actually make the problem worse.

“Evidently, a coalition was trying to reach a clear but shameful objective, by distracting the Africans to stop them from listening to the Holy Father’s words on the problems of injustice, violence and their causes,” Ouédraogo said.

Perhaps the most forceful speech along these lines, however, actually came not from an African, but from Italian Cardinal Ennio Antonelli, president of the Vatican’s Pontifical Council for the Family – based, Antonelli said, on reports that reach his office from Africa.

Like Sarah, Antonelli blasted a Western form of “gender theory,” which, he said, “is starting to infiltrate associations, governments and even some ecclesial environments in the African continent,” often “heavily disguised.”

NGOs and other international groups, Antonelli said, come to Africa to tackle real problems such as hunger and violence. Yet the values upon which they base that activism, he said, are ambiguous.

“For example, equality of people no longer just means equal dignity and access to fundamental human rights,” Antonelli said, “but also the irrelevance of the natural differences between men and women, the uniformity of all individuals, as though they were sexually undifferentiated, and therefore the equality of all sexual orientations and behavior: heterosexual, homosexual, bisexual, transsexual, polymorphous.”

“This ideology is spread by reproductive health centers, local educational meetings and international TV programs broadcast via satellite,” he said. “Collaboration of African governments and local groups, including ecclesial groups, is sought, and these groups usually don’t realize the ethically unacceptable anthropological implications of this.”

Antonelli closed with “an invitation to be vigilant, an exhortation to offer careful instructions to priests, seminarians, religious, Caritas and other lay pastoral workers.”

According to a Vatican briefer who was present in the synod hall, Antonelli’s speech drew applause from the bishops.

Canadian bishops: Indigenous delegation to meet with pope by end of 2021

CRS moves some staff out of Egypt