Controversial nun speaks out on war in Syria 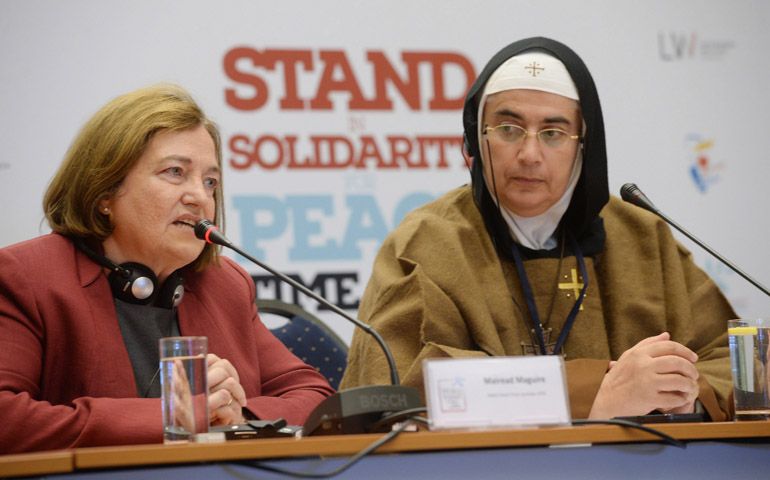 Mother Agnes Mariam, the Lebanese-born head of St. James the Mutilated Monastery in Qara, Syria, is a controversial figure in the international debate over how to resolve the escalating violence in Syria. Her supporters, including Nobel Laureate Mairead Maguire, say her message of forgiveness and reconciliation is a critical component to ending the civil war. Her opponents, including the Syrian American Council, say she is an apologist for President Bashar Assad and should not be allowed to continue her 12-city speaking tour in the United States.

"It is difficult to stand in the middle of the conflict, to be a mediator," Mother Agnes Mariam said at the opening of her Nov. 5 talk at a retirement community in Walnut Creek, Calif. She said she wants all foreign parties -- from Western and Middle East governments to international fighters linked to the Taliban and al-Qaida -- to leave the country so "a new coalition of people can forgive one another and walk hand in hand to negotiate reconciliation among Syrians."

She said she has positive relationships with Syrian government agencies, with whom she has worked to bring humanitarian aid to the displaced, as well as the Free Syrian Army that holds the territory surrounding her monastery. During her PowerPoint presentation Nov. 5, she described brokering the successful evacuation from Moadamiya in October of several thousand women, children and the elderly caught between rebels and Syrian government forces.

She said she visited both the rebel military council and the Syrian Air Intelligence, and when negotiations broke down, she walked alone into the "no man's zone" to demonstrate her determination to win support for the humanitarian effort. Eventually, the evacuees were able to board Red Crescent buses and leave the area -- a moment that demonstrates the power of mediation and reconciliation, she said.

However, Quasi Zakarya, a rebel spokesperson in Moadamiya, in a report posted at www.all4syria.info, said the evacuation was "regime-orchestrated," with Mother Agnes Mariam as the enlisted liaison. Mother Agnes Mariam is "the big, strong, media face for the Assad regime," he said.

Brought to the United States for a speaking tour under the auspices of the Syrian Solidarity Movement -- a nonprofit organization with a steering committee of American, Canadian and Australian peace advocates -- the 61-year-old nun is a leading proponent of the interfaith Mussalaha (reconciliation) Movement. The organization seeks a nonviolent solution that would bring all legitimate parties in the conflict together to find a "third way" to achieve freedom and democracy in Syria, where more than 115,000 have been killed and an estimated 6.3 million have been displaced.

"I used to hate Syrians who came to Lebanon to bomb us every day" during a war that began in 1975, she told about 300 Arab Christians gathered Nov. 3 at St. Thomas More Church in San Francisco for a prayer service for peace in the Middle East. "Then the Lord called me to Syria to a blessed adventure to restore an ancient monastery that was in ruins."

She said she underwent a conversion. "I learned never to hate anyone, even my worst enemy, who is a human being, who is my brother. I believe what Jesus said: Answer violence with love."

Her path to Syria was not simple. Born in southern Lebanon to a Palestinian father and Lebanese mother and raised as a Melkite Greek Catholic, she left home at 16 on a spiritual journey that took her to Europe, India and Nepal. She lived a "hippie lifestyle" for two and a half years, she told NCR.

One day in Nepal while gazing at the Himalayas, she said she was overcome with the realization of the power of God and his total love for her. Then in Amsterdam, she had an experience where "God gave me a glimpse of the glory he has reserved for those who are saved." Finally, during a second trip to India, an internal voice urged her to "find the Carmel," and she decided to return to Lebanon where, three months later, she entered the Carmelite Order in 1971.

"It was a very difficult transition," she said, recalling those early days of adjusting to the rigors of Carmelite life. She remained a Carmelite for 22 years, during which time she returned to Europe to study ancient Christian art and participate in a project dedicated to the restoration and preservation of manuscripts, icons, tapestries and other art from the Middle East. She went to Syria in 1993 to explore the ruined sixth-century monastery of St. James and began planning its restoration.

The following year, she founded the Order of the Unity of Antioch there. The order gained church approval in 2000 from the diocese of Homs, she said. Today, the monastery is home to a 15-member community of seven women religious, three brothers, one priest and one couple with two children -- "like the first Christians," said Sister Carmel, Mother Agnes Mariam's traveling companion. Until the current Syrian war broke out, up to 25,000 visitors came annually to see the restored ruins. The community supports itself by painting icons, growing and selling medicinal plants and other agriculture, and offering counseling to those with emotional and spiritual difficulties.

Now Mother Agnes Mariam has thrust herself into the midst of the suffering of the Syrian people and said she has been called to mediate disputes and organize ceasefires between opposing forces.

"Don't tell me I'm for one faction against another," she said in response to a question about where her loyalty lies. "I have to talk with all factions."

That message does not satisfy those who remain convinced she is colluding with the Assad government. During her talk in San Francisco, a member of the Syrian American Council's northern California board walked to the front of the church with a large sign reading, "Stop Mother Agnes propaganda. She is an Assad agent disguised as a nun." There was a brief scuffle between him and several men who escorted the protester out of the church.

Mother Agnes Mariam's opponents are angry she doesn't speak more directly against the violence of the Assad regime and that she isn't supporting efforts to remove Assad from power. They also point to her report, given to the United Nations in Geneva, claiming that some of the videos showing victims of the Aug. 21 chemical weapons attack were fabricated.

"Mother Agnes does not have direct knowledge of the Ghouta attack," wrote Carroll Bogert, a deputy executive director for Human Rights Watch. "Her convent is located some 100 kilometers from the attack sites. She does not have military expertise and has not visited the site or examined the remains."

Although her report was interpreted initially as a denial that the attack took place, Mother Agnes Mariam said she was questioning inconsistencies in the videos, which swayed many in the international community to support further outside military intervention.

Another Human Rights Watch director, Peter Bouckaert, refuted those claims, saying his organization has found no evidence to indicate the videos were fabricated.

Underlying Mother Agnes Mariam's message of peace is a fear that radical Islamic fundamentalism will prevail in Syria if all parties to the conflict, including the Assad government, are not involved in a settlement that would include safety and full democratic participation for Syrian Christians and other religious minorities. "We don't want a sectarian war in Syria; we don't want massacres and counter-massacres." She also warned against the Middle East becoming a "new apartheid instead of being an oasis of civilization."

Mother Agnes Mariam is scheduled to speak Thursday and Friday in Cleveland; Saturday and Sunday in Denver; and Monday in Lincoln, Neb., before taking her message to England beginning Nov. 21. More information is available at Syria Solidarity Movement's website.

World | Controversial nun speaks out on war in Syria

Fruits of diplomacy: Obama's legacy in the Middle East