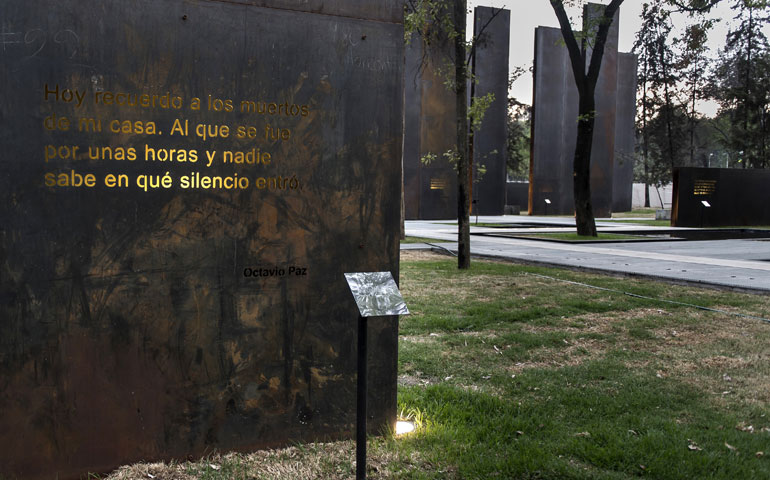 The memorial to victims of violence is seen in Mexico City last year. (Newscom/AFP/Getty Images/Omar Torres)

The following is the final part of a three-part series focusing on gun violence in Mexico. Mexico is a state with highly restrictive gun laws, but is still inundated with firearms, most of them coming across the border from the United States. A March 2013 study by the Trans-Border Institute at the University of San Diego and the Brazil-based Igarapé Institute estimates that upward to a quarter million weapons purchased in the U.S. are smuggled into Mexico annually.

Rust-colored metal panels, the size of movie screens, stand upright beside a busy intersection in Mexico City. The commemorative to the country's victims of violence is confusing and controversial to some.

Just who is being honored is unclear, writes New York Times correspondent Damien Cave in his Aug. 22 blog about the memorial. Is it a tribute to all those killed, kidnapped or extorted in Mexico's drug war, or just those victimized by the Mexican authorities? Quotes from Mexican poets and intellectuals are inscribed in the corners of some of the panels, but most are left blank as an open space for the public to write messages or the names of loved ones killed. Hanging above one screen adorned with a drawing of a weeping heart is the question: "Cuántos muertos?" -- "How many dead?"

An accurate tally is hard to come by. Between 40,000 and 60,000 persons is the death toll commonly reported in the U.S. press. But the Trans-Border Institute, which publishes an annual report on drug-related violence in Mexico, estimates the total number of homicides during the administration of former President Felipe Calderón (2006-2012) to be around 120,000 to 125,000.

Ascertaining how many of those killings were drug-related is murky business because of a lack of access to reliable statistical information and an overabundance of questionable data. Less than 25 percent of crimes in Mexico are reported and the legal system there makes few distinctions among the categories of homicides.

The two official organizations in Mexico that publish national homicide statistics do not identify whether there is a connection to organized crime in a particular case. Both government and independent sources have attempted to do so. Yet publication of that data has been erratic, according to the Trans-Border Institute's 2012 report, "Drug Violence in Mexico." Under pressure from media organizations, civic groups and the government's transparency agency, the Calderón administration released data on the number and location of organized crime-related killings from December 2006 through September 2011, then in November 2012 announced it would no longer do so, saying this kind of violence is not codified by Mexican law and is therefore too difficult to identify. The Mexican daily Reforma, which published its own weekly tally of drug-related killings, as well as numbers of police and military killed, abruptly stopped publishing its numbers the following month.

David Shirk, a political science professor at the University of San Diego and co-author of the 2012 report, says the Mexican government resumed sporadically publishing its data on organized crime-style killings last spring, in part to show that the homicide rate in Mexico is trending downward. Some researchers question those stats, he noted. Reforma is also again reporting its weekly tally, "but only at the national level, not state-by-state as it had done in the past. Reforma has not gone back to their old way of reporting. The amount of information provided is very tightly controlled," Shirk said.

Earlier this year, when The New York Times submitted a public records request with the Mexican attorney general's office, the Interior Ministry, and the 10 states with the highest murder rates asking for basic data on the dead -- age, gender, cause of death -- only one state provided information. All others refused, citing privacy, although one said it was not competent on the matter.

Perhaps no one has been more dogged in a desire to count the Mexican dead than Molly Molloy, a research librarian and border specialist at the New Mexico State University Reference and Research Services* in Las Cruces, N.M. In 2008, she began monitoring daily and monthly homicide statistics for the Mexican city of Juárez, inspired to do so after she noticed an astonishing escalation in the number of murders. Forty-six people killed in January 2008, 117 in March. High tallies even for a city known for violence.

In 2011, Molloy expanded her research to track Mexican media and government reports of homicides nationwide. Her personal email account contains thousands of news articles about murders and massacres of the past five years, and she manages Frontera List, a news and discussion site of U.S.-Mexico border issues.

In August 2013, the online publication Small Wars Journal published Molloy's "The Mexican Undead: Toward a New History of the 'Drug War' Killing Fields." The 42-page essay, replete with charts and more than 100 footnotes, chronicles much of her research. Her own tally for the violence in Mexico of the past six years: at least 120,000 to possibly more than 130,000 persons killed, 27,000 missing, and an untold number buried in mass graves.

Molloy told NCR that it is "too simplistic" to categorize a large portion of those victims to casualties of the war on drugs. "While there is a lot of criminal-on-criminal killing, a lot of people are getting killed by paramilitaries, death squads and security forces," she said. In her essay, Molloy notes that many of the dead were extremely poor and she suggests they could be victims of a policy of social cleansing.

"The overwhelming majority of the deaths are people shot down on the street, in their homes or workplaces, on playgrounds, etc. In my reading of the daily accounts of the killings, it is clear that most of the victims are ordinary people, exhibiting nothing to indicate they are employed in the lucrative drug business," Molloy wrote. She cites the findings of Sandra Rodriguez, an award-winning Mexican journalist with El Diario de Juárez who investigated 3,203 homicide case files for the state of Chihuahua over a 19-month period (January 2010-July 2011). Rodriguez discovered that only 59 files contained evidence a gun was near the body.

Amid all the killing, Molloy told NCR, she has seen no evidence the flow of drugs from Mexico has decreased, which prompts her to ask, "So if this is a drug war, who is winning, and what were all those dead people killed for?"

*An earlier version of this story had the incorrect university.

A version of this story appeared in the Feb 28-March 13, 2014 print issue under the headline: Counting victims is a murky business.