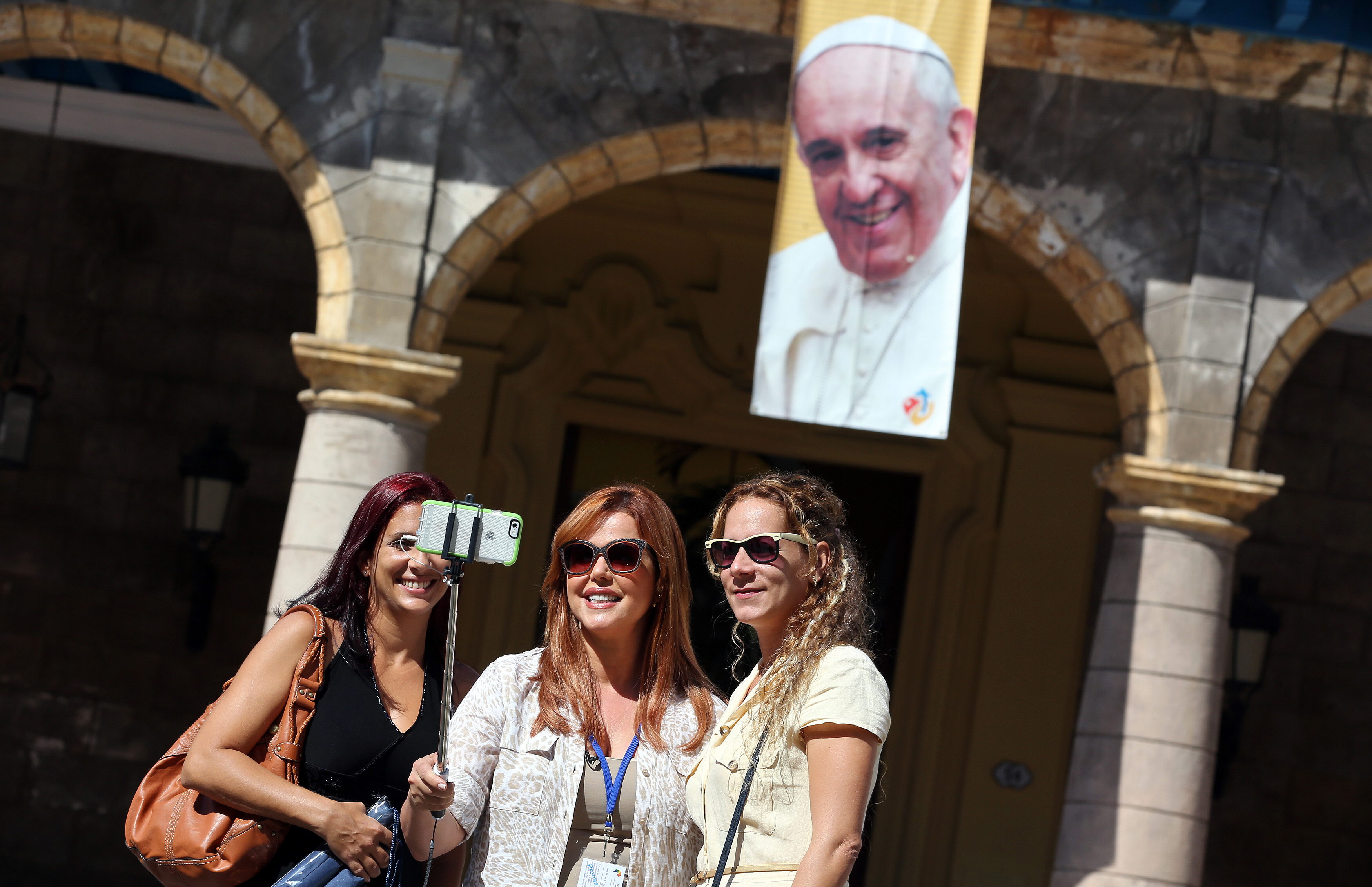 Tourists take a "selfie" in front of an image of Pope Francis in Havana Sept. 18, the eve of his visit to Cuba. (CNS/EPA/Alejandro Ernesto)

As Pope Francis lands Saturday in this long-isolated world capital for a four-day visit to the island nation, local Catholic leaders hope he will help create a new moment in history pregnant with possibility.

But they also say Francis will find himself among a people still experiencing deep suffering from decades of international and internal conflict, and that the pontiff may not be able to live up to expectations placed on him since his role in the thawing of relations of Cuba with the United States.

"I think the pope is going to disappoint most people, because he's not coming here on a political visit," said Jesuit Fr. Alberto García, a native Cuban and staff member of the Centro de Espiritualidad Pedro Arrupe, a faith formation center in Havana.

"Some people are expecting the pope to really challenge and confront the government," said the Jesuit. "He's not going to do that. He's coming here ... as a missionary of mercy."

At the same time, García and others said they hoped the pope would use his visit to help build new bridges over long-lasting conflicts and also encourage healing for Cuba's people.

"It's a different moment in history for Cuba," said Jesuit Fr. Juan Miguel Arregui, the provincial of the order's Cuban province and director of the Havana's Loyola Center for Culture and Faith.

"It's a moment of expectations, of opening, of big hopes for change," said Arregui. "I think the pope is hoping to support that change."

Francis, who has been credited by both the U.S. and Cuba for pushing forward talks that led to reestablishment of formal diplomatic relations between the two countries, is landing in Havana Saturday afternoon.

The pontiff will be visiting three Cuban cities through Tuesday morning before heading to the United States, where he will visit Washington, New York and Philadelphia.

In Cuba, the pontiff will celebrate an open-air Mass in Havana's Revolution Square Sunday morning before meeting with President Raul Castro later that day. The pope will then travel some 400 miles east on Monday for visits to the Cuban cities of Holguin and Santiago.

Large crowds are expected for each of the pope's events and anticipation in Havana on Friday was high. Granma, the official newspaper of the country's Communist Party, printed a special supplemental section covering different aspects of Francis' life and ministry.

Signs welcoming the pontiff were seen throughout the city. One Catholic church, the parish of the Sacred Heart of Jesus and St. Ignatius of Loyola, had placed a person-sized corkboard in its lobby asking people to write down their messages to the pope.

Some left incredibly moving testimonies on the sign, with one asking him to pray for jailed Cuban dissidents who "suffer in unhealthy prisons."

García, who returned to Cuba in 2001 after spending decades abroad, said that Francis will find himself in a country that "needs an unbelievable amount of healing."

The church in Cuba, he said, has two missions: "One is to heal, and the other one is to restore faith in the possibility of a life here in this country."

Many people in Cuba, the priest said, have lost hope.

"There is an enormous sense of disheartenment," he said. "People have lost faith. They just plod along without a great deal of enthusiasm. That hurts. There are many young people who are here in Cuba, but their minds and their hearts are elsewhere. They are like exiles living here."

Arregui, a native Spaniard who took up his role in Cuba in 2008, said he hoped Francis might address the spiritual dimension of peoples' struggles.

"Problems are not caused by laws alone," said the provincial. "We need spirituality. Before God, we are all brothers. And as brothers we need to treat each other with dignity."

Comparing Francis' visit with visits to Cuba by popes John Paul II in 1998 and Benedict XVI in 2012, Arregui said that the current pontiff is helping to bring alive famous words spoke by John Paul during his visit.

"I think that now that is beginning to be more true," said Arregui, saying that Francis' role in the thaw in relations with the U.S. helped "break that blockade of communication" when "Cuba was very enclosed within itself."

The Jesuit provincial also said he hoped that the pope could help build better bridges between the church and the government in Cuba.

"A bridge exists, but we could say that it's still fragile," said Arregui. "It needs to grow in trust, in articulation of common activities, and liberty of action of the church in society."

For others, Francis' decision to combine his trip to Cuba with an immediate trip to the U.S. raises hopes that the pope might use the occasion to continue to build closer ties between the countries.

And those hopes are enmeshed with some deep emotions. Many Cubans have family members living in the States. Because of continuing restrictions on travel, they may not have seen each other in years.

Asked if Francis might use his combined tour to Cuba and the United States to give some sort of message about the island nation, one Cuban woman immediately broke down in tears.

Explaining haltingly that her son lives in the States, Magda Valdés said she hopes the pope will "bring a message of peace and love, of tolerance, of reconciliation" from Cuba to the U.S.

"The Cuban family is divided, and a large part of it is over there," said Valdés, the executive secretary for the Jesuits' Cuban province.

"Countries need to learn how to live while recognizing each other's differences, and to respect their decisions," she said. "There has to be a transparent and respectful dialogue at all times, independently of whether or not we agree. I think that's the way forward of respect, love, peace."

Another Cuban woman said she hopes Francis is able to use his joint Cuba-U.S. trip to relay a message to the Cubans' northern neighbor that they  "very much want a relationship between the two peoples."

The pontiff, said Iraida Rodriguez, is already building a bridge for that relationship between the countries.

"He has the foundations of that bridge already built," said Rodriguez, the receptionist at Havana's Loyola Center for Culture and Faith.

"The Cuban people have good intentions to be united," she said. "Because we're all Americans."