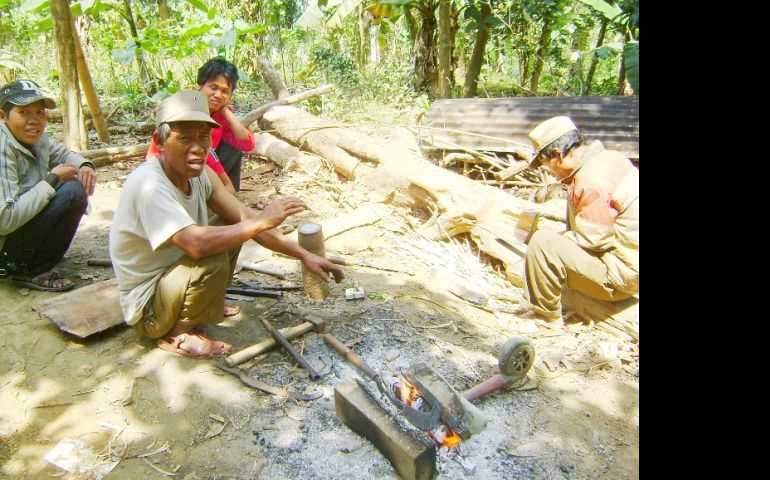 Ho Kan Son (left) and his two sons forge cutting tools out of metal from unexploded bombs for a living. (Peter Nguyen)

Hue, Vietnam — While unexploded munitions left from the Vietnam War that ended 39 years ago are still plaguing people in the central province of Thua Thien Hue, some local people riskily use them as their means of making a living.

Ho Kan Son, a man of Pa Co ethnicity, and his two sons regularly walk to forests in A Luoi district scavenging unexploded bombs, bullets and land mines. They defuse them and cut them into pieces, then forge kitchen knives and cutting tools from the metal.

“As a former Communist guerrilla, I know how to defuse old bombs and bullets and take the gunpowder out of them safely, so I do not fear they can explode,” Son, 59, said pointing to an old shell he uses as an anvil nearby a fire.

He said old munitions are his five-member family’s main source of livelihood. They cannot live on just the crops they grow on the small amount of arable land they have, he added.

His eldest son, Ho Y Tung, 30, said they started to produce sharp tools for a living in 2009 when a man from Hue City taught his father how to forge knives out of them. The man had noticed Son carrying 66 pounds (30 kg) of bullets and old bomb pieces on his shoulders. Son was traveling 43 miles (70 km) on foot into the city and selling the parts for 60,000 dong per load (less than U.S. $3).

Tung said tens of people from his Hong Thuong village scavenge the surrounding old battlefields daily for old unexploded munitions to sell as scrap for a living. They sell them to local traders or exchange them for food.

“Many villagers buy motorbikes, television sets and make repairs to their houses thanks to collecting old ordnance,” Tung said. Most of local people grow rice and corn and live in poverty.

Tung’s house sits three kilometers away the old Phu Bai airport that U.S. forces used from 1960 to 1966 during the war. This spot, and the surrounding area, was the site of 2,123 battles between northern communist troops and U.S. forces, according to A Luoi district’s records.

The district has 250 square miles (64,793 hectares) of land contaminated by unexploded ordnance. Last month some local people found a bomb weighing nearly a ton (over 900 kg) lying in a small brook at Hong Kim Village.

Since the Vietnam War ended on April 30, 1975, the district has recorded some 150 people who have died from unexploded ordnance. Approximately 550 others have been injured.

Jacob Nguyen Co, who moved to this area in 1977, said unexploded munitions have killed two of his family members.

“Memories of my beloved wife’s terrible death still remain engraved on my mind although the accident took place 34 years ago,” the farmer said. His wife was killed by a shrapnel bomb while she was hoeing in the garden in 1980. The bomb explosion also left him partially deaf.

Co, 75, said in 2010 his 10-year-old grandson picked up a shrapnel bomb on the way to school to play with. Its explosion killed him.

He said there may be old munitions left in his half-acre farmland (2,000 square m), and he is concerned that such terrible accidents could happen to his family members at any time.

“It is unsafe to live here, but we have no choice. We have no money to move to other places,” Co said with a low voice.

Daughters of Our Lady of Immaculate Conception Sr. Benedictine Nguyen Thi Dien, who is in charge of providing health care for people in the district, said with little financial support from foreign charities, nuns give food, medicine, building materials, wheelchairs and money to victims of both unexploded ordnance and Agent Orange, the defoliant used by U.S. forces in the war that was primarily made of lethal dioxin.

Nuns also provide coffins for those who have died from bombs, and they give their children scholarships. They try to educate local people about how to avoid bomb explosions.

She noted that victims of old munitions are those who have no or low-income jobs.

“It is important to reduce the risk of life and injures by giving local people vocational skills and offering them money to raise cattle and poultry for a living,” the nun, who works as a doctor, suggested.

The Voice of Ho Chi Minh City People reported March 30 that the government estimated unexploded ordnance has claimed 42,000 lives and injured 62,000 other people since the war ended. It said 25,483 square miles (6.6 million hectares) – or 20 percent of the nation’s land mass – is contaminated by unexploded ordnance and would cost an estimated  $10 billion for clearance. Only 3.2 percent of the contaminated land has been cleared so far.

The unexploded ordinance in Cambodia and Laos is also vast. The Ho Chi Minh Trail passed through both countries as weapons were sent from North Vietnam to South Vietnam to add to the weapons of the North Vietnamese Army and the Viet Cong fighters during the American War. Although Cambodia has made more progress in safely detonating these weapons, every year there still are at least 50 people or severely maimed by them. Laos had millions of small cluster bombs spread over its fields. Most of the cleaning is done there by local people who learned how to detonate the dangerous weapons themselves since there has been so little help from outside the country.

The U.S. Embassy in Hanoi said since 1993, the U.S. Government has provided over $63 million in assistance to mine action in Vietnam and to support for people with disabilities, regardless of cause.

Go or return to GlobalSistersReport.